Home » Gotham review Everyone has a Cobblepot 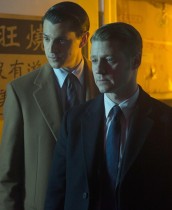 TV Review: GOTHAM – Season 1 – “Everyone Has a Cobblepot” 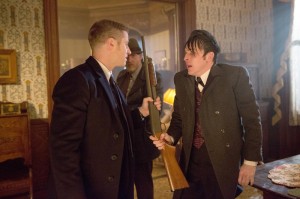 Gordon (Ben McKenzie), Bullock (Donal Logue) and Cobblepot (Robin Lord Taylor) find themselves in a dangerous situation in GOTHAM "Everyone Has a Cobblepot" | © 2015 Jessica Miglio/FOX

The means to an end continues to be an overwhelming theme in GOTHAM.

Faced with corruption on a massive citywide scale – with anyone from the cops, to the mayor, to the commissioner, to city workers and everyone in-between – James Gordon (Ben McKenzie) has been taking the low road at times in order to fight what he believes is a greater evil in the city. While Gordon isn’t comfortable with this approach, he believes that in order to make a difference in the city he is doing what he has to in order to make changes.

It came to a head with “Everyone Has a Cobblepot” as Gordon goes on a evidence manhunt after Commissioner Loeb (Peter Scolari) after Loeb releases a crooked cop that Gordon had gone out of his way to prove was dirty and had overwhelming evidence against. The reason he was set free was because Bullock (Donal Logue), Gordon’s own partner shot a video stating the evidence was false. Bullock later confesses that “everyone has a Cobblepot” – a reference to Gordon having to kill Penguin (Robin Lord Taylor) at the request of the mob, of course Gordon set him free – and his was in the hands of the commissioner. Loeb then used it to get the dirty cop off on the charges.

After Gordon recruits Harvey Dent (Nicholas D’Agosto) to his cause, they track down what they think will be an angle to get Loeb to do their bidding but it is a set-up. This brings Bullock onto the cause and he has his own way of getting information into Loeb, which leads them to a remote farmhouse where a duo of elderly people are holding a major secret for Loeb – his daughter. But his daughter’s elevator doesn’t go all the way to the top and the mystery involving Loeb’s wife’s death is revealed as the daughter loves to collect birds … well, bird skeletons and admits to bashing her mother over the head with a candlestick.

Given this nugget of information, Gordon uses it to blackmail Loeb into not only giving up what he has hanging over Bullock but an endorsement as the next president of the police union – a major step up in his bid to gain influence over the police in general (since it was also revealed the commissioner has “Cobblepots” on many in the force). But in order to get this evidence, Gordon once again had to go to Penguin in order to discover the location of the farmhouse in exchange for a favor (something he will call upon Gordon to fulfill at some point).

Bullock has wise words toward the end of the episode where he warns that as much as people try to erase the mistakes (or Cobblepots) that they have made with good deeds, the means never amount to a satisfying end. He also warns that he has Penguin at some point to deal with and to be careful.

This was by far the most interesting aspect of “Everyone Has a Cobblepot” with the subplot of Bruce Wayne (David Mazouz) falling again into the realm of boredom and the continued boring romance hopes of Edward Nygma (Cory Michael Smith). It was interesting to see Penguin’s evil nature come out toward the end of the episode as while he hasn’t been a nice person by any means, straight up murdering people hasn’t really been his forte until now.

Meanwhile, the only other interesting subplot had to do with Fish Mooney (Jada Pinkett Smith) integrating herself with The Dollmaker aka Dr. Francis Dulmacher (Colm Feore), the lead surgeon in the hospital/body parts reservoir where she found herself taking control of those poor unfortunate souls in the basement. The Dollmaker is an enemy of Batman in the comics that makes dolls out of body parts and what we see on Gotham with his former assistant seems to add up to a similar storyline playing out here in the TV universe. It is an interesting twist with Fish as she has been regulated to the mob storyline up until this point and with her not going anywhere on an island far away from Gotham, it should continue to be interesting moving forward.