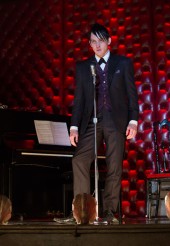 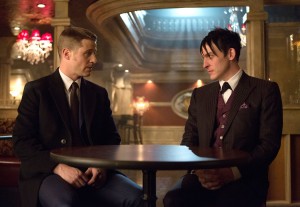 After a huge episode of GOTHAM last week that featured the confrontation between Fish (Jada Pinkett Smith), Penguin (Robin Lord Taylor) and Falcone (John Doman) that culminated in the destruction of Fish’s crew and her getting taken by Falcone’s henchmen for a nice round of torture, things slowed down a bit this week in “Welcome Back, Jim Gordon” but not by a lot.

We open with Fish getting said torture but she’s doing her best to stick it to her torturer by laughing at him while he performs some gnarly deeds to her (although not really that much). Luckily, Butch (Drew Powell), Fish’s head henchman, is crafty is able to escape his capturers and find out where Fish is being held and promptly breaks her out before any real damage can be done.

Fast forward through the episode and Fish confronts Penguin in her old club (now taken over by Penguin) and as she is about to put the screws to him, Victor Zsasz (Anthony Carrigan) tracks her down and chases her out of the club saving Penguin and re-capturing Butch. Fish escapes and toward the end of the episode we see her and Bullock (Donal Logue) getting cozy as she tells him she is leaving for now but will return to take her revenge on Penguin.

A couple of things here. With Fish out of the way for now, where will the mobster plotline go from here? It looks like we are heading toward a Maroni (David Zayas) and Falcone fight, something that has been brewing since the beginning of the show. Once this sorts itself out, probably in much blood, it will be interesting to see where they take the mobsters from here. As this has been such a large portion of GOTHAM, it won’t be going away any time soon but I wonder after the events here in this episode if a turning point may begin with the Gotham police in terms of perhaps a more dedicated effort to actually fight crime rather than be part of it.

That brings us to the other main plotline of “Welcome Back, Jim Gordon” and the title really does a nice job of summing it up. Gordon since day one has been championing that the corruption going on in Gotham needs to be stopped and he will put his own ass on the line if needed. After getting cast off to Arkham for two episodes (sort of), he’s back and back to cracking down on corruption. This time somebody has killed a random dude and a witness is brought back to Gotham PD to give his statement but before that happens that guy is killed with two icepicks shots to the back.

Internal Affairs rules it as a suicide which is the most laughable thing especially with Gordon even saying “He killed himself by knifing his back twice?” It shows just how deep the corruption goes and it goes all the way to the top as we have seen with the mayor being involved as well as the police commissioner. But Gordon is not backing down this time and goes so far as to recruit Penguin for help. A move that he will regret not just later more than likely but right in this moment as well.

Sure, Gordon gets the evidence on the detective that has been killing people and is able to rally the captain and others to arrest one of their own, but how Penguin’s flunky got the evidence by torturing a drug investigator’s wife ends with the man pleading to Gordon not to harm his wife or kids again. Gordon looks on in horror as he has used terrible tactics to get the results he wanted. Is he has bad as the others? Is he corrupt? Does the ends justify the means? Like I said, this is a move much like agreeing to kill Penguin that will come back to haunt him moving forward.

Other than the two main plotlines going, we had an appearance of Bruce Wayne (David Mazouz), Alfred (Sean Pertwee) and Selina Kyle (Camren Bicondova) with Kyle basically lying to Bruce about not knowing anything about the death of his parents and each going their separate ways. Considering this subplot is the weakest thing going on the show, I could take or leave what happened here. Until all three of these characters get some interesting plotline, I’m happy to have them as a small nugget of what’s happening in the greater of the show.

Overall, another solid episode of the show that continues to prove that superhero shows that don’t necessarily involve superheroes can work if done right.