Home » Gotham review What the Little Bird Told Him Season 1 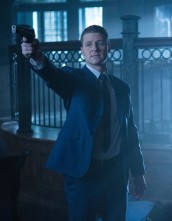 TV Review: GOTHAM – Season 1 – “What the Little Bird Told Him” 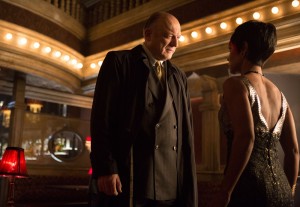 Everything came together in the mobster mythology arc on GOTHAM in “What the Little Bird Told Him.” It was a culmination of all of the episodes we have seen so far concerning Fish (Jada Pinkett Smith), Penguin (Robin Lord Taylor) and Falcone (John Doman).

The mobster mythology has carried throughout the entire first season so far on GOTHAM and it has been one of the reasons the show has been so good. A boatload of backstabbing, chess pieces being placed and deals being made in the dark to become the top power in the city. All of these dealings have been extremely dark with people being killed on both sides, making it extremely interesting television.

As a recap, Fish has been vying for Don Falcone’s top boss spot for a long time. So she set in motion a series of plans to gain power. But along the way she turned on Penguin and ordered to have him killed. But Penguin set his own plan in motion and asked if Falcone spared him and gave the order to Jim Gordon (Ben McKenzie) to “kill” him he would be loyal to him. Obviously, this happened with Gordon not killing Penguin and then in turn Penguin becoming Falcone’s secret informant (or little bird as the case may be). Fish, meanwhile, groomed Liza (Makenzie Leigh) to become Falcone’s object of affection, telling her about Falcone’s mother and using that knowledge for her to get close.

In “What the Little Bird Told Him,” Fish “kidnaps” Liza and makes a play to Falcone for his position of power for her life. It seems to be all going to plan and Falcone sees no way around the situation … that is until Penguin arrives late to tell him that Liza is just a plant from Fish in order to gain power over him.

Penguin was late because of the conclusion of the first two-parter in GOTHAM in the ending of the Jack Gruber storyline and Gordon’s return to the Gotham PD. Of course, in the previous episode during his time as an officer at Arkham Asylum, Gordon was tracking a case of someone using electricity to torture some of the inmates there and then use them to his bidding. It was Gruber who escaped after a mass riot. Gruber is now loose in Gotham and terrorizing those that did him wrong before he was arrested. One of these people just happens to be Maroni (David Zayas) and he attacks him getting Penguin caught in the mess (where he spills the beans about having a meet with Falcone to Maroni, which no doubt will come back to haunt him at some point).

Luckily, Gordon put on some rubber heavy boots and when Gruber aka The Electrocutioner comes calling and knocks out the entire police force, he stands tall and is able to defeat Gruber (rather easily). With the arrest of Gruber, Gordon gets his shield back and gives the commissioner a warning that he has no intent on slowing down his personal war on corruption.

Back at Falcone’s, Penguin informs the mob boss about Liza before he meets with Fish. When he does, you know it isn’t going to end well for her right from the start. Falcone knows everything and kills Liza and Fish’s crew before promising he will torture her and make it personal because that’s what she did by using his mother as bait to get to his emotions. A truly dark, glorious end to the shenanigans that have been going on between the two and with everything now in the open, this will be a fun watch in the episodes ahead.

What was lacking from this episode was any plotline surrounding Bruce Wayne (David Mazouz), Alfred (Sean Pertwee) and Selina Kyle (Camren Bicondova), which isn’t a bad thing. Of all the subplots happening on GOTHAM, the surprisingly dullest is that involving Wayne and his quest to find the killers of his parents as well as become a better fighter. While Selina has been able to branch out a bit from being confined in this same plotline, she too has disappointed. Hopefully in future episodes, Wayne will have a better storyline but right now it stinks.

Overall, without Wayne and a huge move forward with the mobster turf war, GOTHAM is heating up already in the second episode back from the winter break.