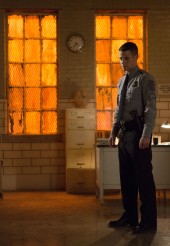 © 2014 Jessica Miglio/FOX
Gordon (Ben McKenzie) begins his work at Arkham Asylum where things are not ordinary from the very beginning. 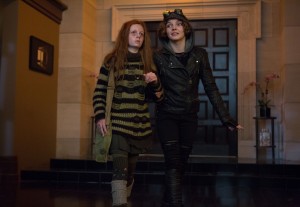 I have finally caught up on GOTHAM and it’s safe to say at this point that this show is one of the best new shows on television this season, as I predicted early last year.

Not only does the show do a great job of balancing the “bad guy of the week” with the main narrative focusing on James Gordon (Ben McKenzie) and Harvey Bullock (Donal Logue) but with all the various subplots going on in each episode the mythology progresses at a nice pace regardless of what the main issue of the episode happens to be.

Bottom line: The entire city of Gotham is corrupt. From top to bottom, in every nook and cranny, someone is on the take and its mob rule. Nothing summed it more than the “Penguin’s Umbrella” episode where Victor Zsasz (in a great debut for the DC character) walked into the police station threatened the entire force of 50 cops and they all left in fear.

We’ve come a long way since then and Gordon has found some allies in the MCU as well as an upstart attorney with a nasty angry management problem in Harvey Dent. After “Lovecraft,” Gordon has been shipped off to Arkham Asylum to be one of the wards there to look after the crazy inmates that were shipped there after the mayor reopened the aging mental hospital.

Gordon’s first few days at the facility, which take place in “Rogues’ Gallery,” are anything but ordinary. The main narrative of the episode functions more as a horror movie than a television show as someone is experimenting with the inmates by electrocuting them and it seems to be progressing from a simple lobotomy to making them come under the villain’s command. Gordon, of course, won’t just let the issue lie and soon discovers something is amiss with the lady nurse that seems far too nice. Turns out she was actually an inmate at the original Arkham facility and has just been hiding out the whole time until they reopened the place.

Like any good horror flick, there was a twist. And, naturally it had to do with Jack Gruber, someone Gordon talked with earlier that seemed far t0o sane to be in an insane asylum or maybe so insane he appeared sane. Anyway, turns out Gruber was the one experimenting with everyone including the old nurse lady and having her do his bidding. Gruber escapes at the end of the episode and we are left with one of the first open ended episodes yet carrying over to the next episode in two weeks.

Now apparently they are doing the introduction of the Electrocutioner with Gruber, which is interesting because this is not exactly who it is in the comics, but given the villain isn’t a huge one maybe they are taking some liberties here.

Meanwhile, unlike other episodes there wasn’t much going on with the mob war battle or with Bruce (David Mazouz) and Alfred (Sean Pertwee) perpetual training. Honestly, that’s not a bad thing as the one boring part of GOTHAM has been the development of Bruce Wayne, which is somewhat ironic I suppose. Penguin (the brilliant Robin Lord Taylor) didn’t have much going on either as he was locked in prison and taught a lesson by Maroni (David Zayas) to not overstep his bounds as a henchman. We did get the re-introduction of Ivy Pepper aka Poison Ivy (Clare Foley) as we discover she’s a friend of Selina Kyle (Camren Bicondova) and the elimination of another mob boss but since we have had little character development in this area it wasn’t a major event. In essence, this was almost a standalone episode for GOTHAM something that hasn’t really happened.

That said, GOTHAM continues to be a great crime drama but one that just happens to be one where we know the outcome and what the characters will grow up to be. But it also functions as one hell of a badass origin story for characters we know very well.