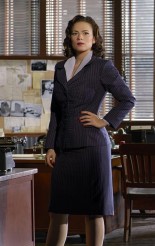 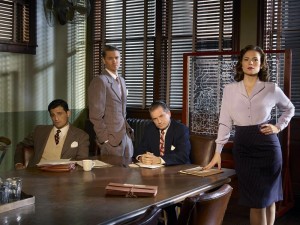 On ABC’s freshman eight-episode series MARVEL’S AGENT CARTER, Tuesdays at 9 PM, we’re with the resourceful Agent Peggy Carter (Hayley Atwell) just after the end of World War II. Carter is part of the Strategic Scientific Reserve (SSR). Carter is the SSR’s most valuable asset, a fact that is lost on most of her male colleagues. No matter – Carter has no problem saving the day without credit. A good thing, too, as SSR will one day become S.H.I.E.L.D., which is explored in the present day in MARVEL’S AGENTS OF SHIELD (which will resume its second season when Season 1 of AGENT CARTER ends).

Jeph Loeb, head of television for Marvel Studios and an executive producer on both series, makes himself available for some discussion of what’s up with AGENT and AGENTS.

JEPH LOEB: I don’t know that they’re different. I just think that each show has its own set of challenges. When you’re dealing with SHIELD, it is a gigantic, huge cast and a tremendous number of special effects and locations and very, very complex storylines that are interwoven. And fortunately, we’ve got amazing show runners [on SHIELD] in Jeff Bell and Maurissa Tancharoen and Jed Whedon. CARTER is a little bit more contained. Some of that has to do with the fact that it takes place in 1946 and so it has to have a certain look to it in terms of where it is. The cast is not quite as large, but by the same token, because everything has to be of that time, cars, makeup, hair, wardrobe, all of those things have to be taken into consideration and still have its own different kind of special effects, most of which have to do with things like backdrops and skylines and those kinds of things. So from a production point of view, and again, we’re very lucky that we’re doing it with our partners at [the feature side of] Marvel Studios, so having Kevin Feige and Lou D’Esposito involved is tremendously helpful. And then there’s the other side of it, which is that Tara Butters and Michele Fazekas and Chris Dingess are world-class show runners, so they’re in it.

But also, it’s very different to produce something which only has eight episodes. It has a beginning, a middle and an end, and you can see the end as you’re starting the beginning. And when you go down the road of doing twenty-two [episodes, as with SHIELD], that’s a really long road, and in fact, we’re in the middle of the second season on top of everything else makes it a different set of challenges.

AX: Will you be you bringing any comic books out of the AGENT CARTER universe?

LOEB: Well, I can’t speak for the publishing division, but I think that it’s safe to say it’s all connected.

AX: Does it make it easier on AGENT CARTER that you’re unlikely to have a massive plot shift dictated by something in another medium, as happened with SHIELD in its first season because of events in the CAPTAIN AMERICA: THE WINTER SOLDIER feature?

LOEB: We’re still a part of the Marvel cinematic universe, we are talking about things that are very important to the origins of that universe, so we just can’t run amok. Everything is very carefully plotted out so that it matches up. And not only does it need to match up to the Marvel cinematic universe, it needs to match up to what happens in AGENTS OF SHIELD, because this is the origins of S.H.I.E.L.D. in its own way.

LOEB: That’s a really good question. At the end of the day, we make our shows for everybody. They’re not intended to be shows that you have to watch other shows or other movies in order to understand or follow or be part of, because it doesn’t mean that you can’t benefit more so by being part of that world. It’s very much like our movies. You didn’t have to have seen IRON MAN in order to understand THE AVENGERS; it’s just a lot more fun. And that’s really what it’s about. We don’t do it for any purpose other than to increase the fun quotient to make it work, and – [CARTER co-creator] Chris Markus was talking about this a little earlier – there is something about the interconnectivity that people really respond to. 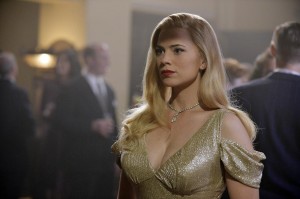 AX: Is there anything you’d like to say about AGENT CARTER or AGENTS OF SHIELD right now?

LOEB: I can’t say it enough, which is, we’re back [tonight, January 27], we run the last five episodes right in the row and then we are back with SHIELD and we will run SHIELD uninterrupted to the end of the season. So it’s a pretty exciting time to be a Marvel fan and to be a fan of the shows.

This interview was conducted at ABC’s party for the Television Critics Association press tour.