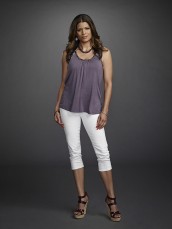 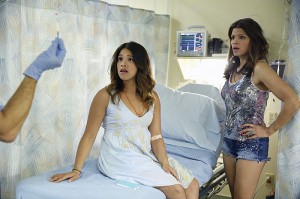 The cast of The CW’s JANE THE VIRGIN is in a celebratory mood. The series, now in its first season 9 PM on Mondays, has been officially picked up for a second year. Furthermore, leading lady Gina Rodriguez, who plays the title role, has just won a Golden Globe for her performance.

JANE THE VIRGIN, based on a telenovela, is a comedic soap opera. Suavely narrated by Anthony Mendez, it tells the story of Jane, a young aspiring writer who has held onto her virginity but finds herself pregnant via a mistaken artificial insemination (it was supposed to be a pelvic exam). Jane (not showing yet) has decided to keep the baby and is currently dating the father, wealthy hotel owner Rafael (Justin Baldoni), which is upsetting to Jane’s lovelorn ex-fiance, the lovelorn Michael (Brett Dier).

Jane’s grandmother Alba (Ivonne Coll) is in the hospital, having been pushed down the stairs by the mother of Rafael’s estranged wife Petra (Yael Grobglas). Alba fakes unconsciousness to sway her own daughter, Jane’s single mother Xiomara, played by Andrea Navedo, to make a bargain with God. Xiomara is growing close again with Jane’s father, telenovela star Rogelio (Jaime Camil), but she promises the Almighty that she’ll remain chaste if only he’ll spare Alba, unaware that Alba is recovering anyway.

The CW has arranged for the membership of the Television Critics Association to visit the Redondo Beach, California soundstage where JANE shoots. At a Q&A session in one of the sets for Rafael’s upscale hotel, Navedo is so overcome with emotion in speaking about Rodriguez’s Golden Globe win that tears come to her eyes, causing Rodriguez to well up as she thanks her cast mates for their support.

Navedo (rhymes with “the meadow”) has been on the soaps ONE LIFE TO LIVE and GUIDING LIGHT and played Detective Ana Cordova on LAW & ORDER, among other credits. When the Q&A is over, the actress answers a few more questions about Xiomara, who fiercely loves her daughter and still harbors showbiz aspirations for herself.

AX: Are you actually old enough to be Gina Rodriguez’s mom?

ANDREA NAVEDO: I actually am, believe it or not. I’m significantly older than her.

AX: Are we looking at several different generations of people having different notions about how to raise a baby? Are Xiomara and Alba going to try to impose their child-rearing ideas on Jane?

NAVEDO: Oh, that’s certainly a possibility, because for Xo, the most successful thing she’s ever done is raising a child, having a daughter, and she’s super-proud to be a mom, so I think she’s going to really love being a grandmother. I think the show is definitely reflective of different ways of raising a child successfully. I mean, there’s no one right way. There used to be a right way, but it really isn’t necessarily that way any more. The world has changed, we’re much more modern and I’m certainly a product of a single mom raising me, although my father was always there, and I survived.

AX: With the vow of chastity, if Xo finds out that Alba was only pretending to be comatose, will she still feel obligated to keep that vow?

NAVEDO: On some level, yes and no. Xo did it for herself, she really did, because she’s trying to find herself as a woman, she’s trying to find her value and her worth. And before Rogelio came along for the second time, she tended to choose love in all the wrong places, which meant that she wasn’t putting herself first, or wasn’t valuing herself as a person. So now making this vow of chastity is picking herself, making herself Number One, and not putting her value in her sexuality.

AX: Cheech Martin is playing Alba’s love interest. Did you get to work with him?

NAVEDO: I did. I have a scene with him and I loved him. Super-charming, very intelligent man, very worldly. He has so much to offer, a wealth of knowledge of the arts and culture. I just so appreciated him sharing all of that. Because he has this persona, this image of how his character is, THE BAMBOO ALBUM and all that other stuff, so you think that’s what you’re going to get. And no, super-intelligent guy. I so admire him. He’s very politically active, which is where that intelligence comes into play.

AX: Obviously, Xo likes Michael more as a match for Jane, but do you as an actress have more fun playing the confrontational scenes between Xo and Rafael?

NAVEDO: Oh, yeah. Actors love to play drama. They love to dig their heels in and go for it. So yeah, I really do – the actress Andrea sides with Michael for some reason. I’m an audience member, too. I do watch the show as an audience member and I really feel for Michael, so I have no problem tearing into [Rafael].

AX: The Narrator has said that Michael will love Jane for as long as he lives. Does that mean he’s going to die and come back, but that’s going to be the death of his love, or …

NAVEDO: I do wonder, because [series creator/show runner] Jenny [Snyder] pulls no stops. I mean, she goes for it, if the storyline’s going to bring her there, if it’s crazy, she’s still going to go for it and bring it there. So it’s certainly a possibility – I would hate to see him go [laughs].

NAVEDO: My favorite episode so far is the one [that aired] on January 19, Episode Number 10.

AX: Where you think that Alba is dying?

NAVEDO: Yes. As an actor, I got to play some pretty dramatic stuff, so I loved that.

AX: And Alba is in the hospital because Petra’s mother shoved her down the stairs …

AX: What’s the most physically strenuous thing you’ve had to do on the show?

AX: When there was the flashback to Jane’s quinceanera and you sang the “Milkshake” song?

NAVEDO: The “Milkshake” song wasn’t that bad. Actually, the pilot was the hardest. I had a very tiny stage, so you could easily step off the stage and fall and bust your butt. So I had two days to learn choreography and the lyrics and then the dress I was wearing was super-uncomfortable, with super-uncomfortable shoes, so all of that was very strenuous for me.

AX: What would you most like people to know about JANE THE VIRGIN right now?

NAVEDO: I’d love people to know that it’s a unique show that offers comedy and drama and just a wonderful feel, light and bright and wonderful entertainment, and it’s going to be a nice escape for them.