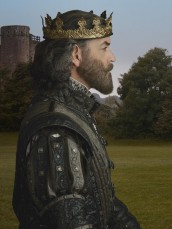 The actor also talks the end of PSYCH 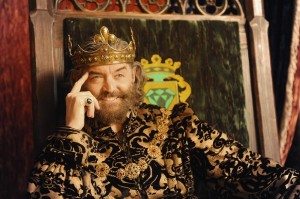 In ABC’s musical comedy fantasy series GALAVANT, which concludes its first season tonight, Sunday, Jan. 25, with two half-hours begging at 8 PM, Timothy Omundson plays King Richard. Richard is a genial tyrant, who kidnapped the beautiful peasant Madalena (Mallory Jansen) away from her true love Galavant (Joshua Sasse). However, Madalena has chosen Richard and his riches over romance, leaving Galavant bereft. Madalena then turns out to be much more despotic than Richard, who is somewhat baffled by his bride’s megalomania.

Omundson is delighted by all of it. The actor, born in Missouri and raised in Seattle, recently wrapped up eight seasons as police detective Carlton Lassiter on PSYCH. Omundson’s other credits include a series regular stint on JUDGING AMY and a current recurring role on SUPERNATURAL as the Biblical character Cain. He also participates in THE THRILLING ADVENTURE HOUR, a stage hit in Los Angeles and on tour that has new comedy “episodes” each month as it parodies various types of Forties radio serieals.

GALAVANT was created by Dan Fogelman, with music by Oscar winner Alan Menken and lyrics by Glenn Slater. ABC throws a party for the series and the Television Critics Association, with Menken performing a medley of his greatest hits. When the GALAVANT cast, including Omundson, is done gathering round the piano to sing back-up on the show’s theme song, Omundson talks about playing Richard.

ASSIGNMENT X: You had a recurring role as the prophet Eli on XENA, which was at its time a very innovative, funny fantasy. Were you looking to do something else along those lines?
TIMOTHY OMUNDSON: I wasn’t looking, per se, I wasn’t searching it out, and it just came to me. I was if anything – I just wanted to do something good. The fact that it’s a period piece always intrigues me, and it was just a happy circumstance that it’s this crazy show.

AX: Would you say the King comes in feeling he’s a relatively sanguine fellow, or is he getting crankier as his marriage is not what he was hoping?

OMUNDSON: I think he’s maybe he’s having a little more difficulty understanding the world, since his world is attempting to be Madalena and that’s not quite working. But a king’s a king. It doesn’t change him too much. I think he’s always been this way. In Episode Six, you [got] to see why he is the way he is.

AX: Is that the episode with Ricky Gervais guest-starring as a wizard?

AX: Were you thinking, “You know, when I signed on, I was not expecting Ricky Gervais”?

OMUNDSON: Oh, my God. It was one of the greatest days I’ve ever had on a set. I love him. I think he’s one of the funniest human beings on the planet, and when I realized that I pulled the long straw and got to work with him, man. He was fantastic.

AX: Is your musical comedy performance inspired by any particular other character or actor?

OMUNDSON: Well, my actual performance is inspired by many, many, many people. I steal from everyone. The musical aspect of it, I’m just trying to do the best I can, honestly. [Laurence] Olivier did a film called THE ENTERTAINER, where he plays a vaudevillian and tells the story of one of his friends coming to him and saying, “You danced so horribly wonderfully.” And he [Olivier] said, “I didn’t have the heart to tell him I was actually dancing as good as I could. I was not trying to be horrible.” So I’m trying to do the best that I can, but the performance, the whole comedy acting part, it’s everything. It’s everything I’ve ever seen. It’s from the hard drive.

AX: You have said that you get bored easily and GALAVANT now looks like it may continue into another season. Do you think you may get bored?

OMUNDSON: Oh, I’ve got a few more in me with this one, believe me. This one is not boring me at all.

AX: How long do you get to rehearse with this? It seems like it might be on a more hurried schedule than the average musical.

AX: How long do you get to rehearse the choreography?

OMUNDSON: If we’re lucky, an afternoon, preferably the afternoon before [shooting]. There have been a couple of occasions where they’ve said, “Okay, come look at this choreography,” which I didn’t realize actually meant, “Come learn this choreography.” And that’s during a lighting change, when I’d normally be learning my lines or working on my lines or shooting the breeze with the other actors. So it’s been quite a learning curve for me.

AX: How have you learned to assimilate choreography more quickly?

AX: Do you have any particular favorite moments in what we’ve seen?

OMUNDSON: I’ve had the time of my life on this show. It’s like your babies – I can’t pick just one. It’s been absolutely fantastic.

AX: Were you happy with the way PSYCH wrapped up?

OMUNDSON: I was very happy with the way PSYCH wrapped up. All good things must end, and one of the things I know [PSYCH creator/show runner] Steve Franks really asked for was time to put the right ending together. And I thought he did an amazing job with that script. And I feel it was incredibly satisfying for all the characters. And I think the audience felt that way.

AX: Is there anything else that you’re doing that we should know about?

OMUNDSON: I do a lot of THRILLING ADVENTURE HOUR. They’re kind enough to have me come play with them. And right now, just spending some time with my family, since I’ve been gone so much and done so much lately. So it’s really them and waiting for this sucker to keep going.

OMUNDSON: It’s going to make you laugh. Unless your soul is dead.