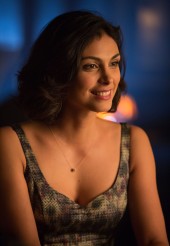 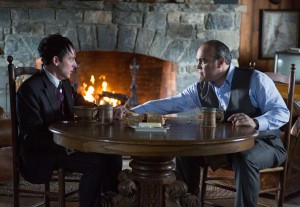 The thing that I am enjoying about GOTHAM is even when we get an episode that is just a bridge to another (possibly more mythology driven) episode, it still does a great job in building the storylines we have seen so far in the season.

That’s what we got with “The Fearsome Dr. Crane,” the first of a two-parter that will conclude next week. Overall, the story was about a serial killer that is preying on the fears of others by killing them using the exact fear they hate the most. Dr. Crane (guest star Julian Sands) has targeted a fear support group by infiltrating it and then finding those with major fears and then disposing of them and extracting fluid from their bodies in the name of science, or so he says. Do it for science!

Of course, this is just a great way to introduce the future Scarecrow, aka Jonathan Crane, aka Dr. Crane’s son, who we will see in the next episode (and possibly his origin into why he became the menacing Batman foe). Here’s why GOTHAM is so enjoyable. While yes we are getting the early years of the “major” Gotham villains including Penguin, Riddler and Catwoman but we are also slowly getting introduce to some of the other maybe not-so-famous villains in the Batman universe. Given how many there are, this could go on for many seasons but I like that they are bringing them to the table right now in the first season. Obviously so no one gets upset, I realize that Scarecrow played a major role in Christopher Nolan’s DARK KNIGHT trilogy but as far as the comics go, the popular villains are the ones above along with Joker (who we still have yet to see).

So Bullock (Donal Logue) gets the first stab at the case looking for Crane while Gordon (Ben McKenzie) spends time dealing with whiny Bruce Wayne (David Mazouz) and defiant Selina Kyle (Camren Bicondova) as well as exploring a new found relationship with Dr. Thompkins (Morena Baccarin). Thompkins took another step toward more screen time in future episodes given she will be the new Gotham PD forensic doctor after Edward Nygma (Cory Michael Smith) set up the current forensic guy because Nygma can’t stop doing autopsies when he isn’t supposed to (despite the fact he always finds something interesting and Gordon actually is calling on him to do the work).

So far they have done a good job building the Gordon/Thompkins relationship with Gordon being “dating strange” and Thompkins being aggressive in her attraction to him. Now part of this has to do with the fact that Morena Baccarin is awesome eye candy and giving her more screen time is OK by me but also it seems this is a more stable relationship than what Gordon had going with crazy Barbara Kean (Erin Richards).

We also got a good helping of the mobster storyline with Fish (Jada Pinkett Smith), who exiled herself from GOTHAM after getting targeted by Falcone (John Doman) in the previous episode, spilling the beans to Maroni (David Zayas) about Penguin’s (Robin Lord Taylor) true allegiance. So Maroni sets up Penguin in a test of loyalty that he fails miserably and plans to kill him in a very James Bond-ish way (an elaborate crush him in a car and send him to Falcone way) only to have Penguin once again figure out a way to survive. Of course, this sets up the inevitable confrontation between Falcone and Maroni that probably won’t happen for a bit but it’s the buildup damnit, the buildup!

Overall, another solid fun episode of GOTHAM with lots of storyline progressing to future episodes that will probably be more action packed and mythology driven.