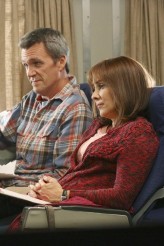 Getting picked up, work ethic, working with young people and much more 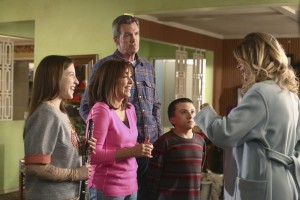 ABC’s THE MIDDLE, Wednesdays at 8 PM, is now in its sixth season. The half-hour comedy stars Patricia Heaton as Frankie Heck and Neil Flynn as her husband Mike, parents of Axl (Charlie McDermott), Sue (Eden Sher) and brainy Brick (Atticus Shaffer), all living the middle-class live in Orson, Indiana. The Hecks are quirky in the way that all families are quirky, often quarrelsome and yet ultimately loving.

THE MIDDLE and its ABC comedy stable mate MODERN FAMILY launched at the same time. Even though the latter gets far more press, the ratings for the two shows are very similar.

Eileen Heisler, who co-created THE MIDDLE with her writing partner and fellow executive producer DeAnn Heline, is herself a Midwesterner, hailing from Chicago, Illinois. At a party thrown in Los Angeles by ABC for the Television Critics Association, Heisler talks about enjoying success in THE MIDDLE.

EILEEN HEISLER: No, there’s still, “Oh, my God we got picked up” – there’s both. I think there’s always, “Are we going to get picked up?” Until you hear it for sure, I think everyone wants to know for sure that they see it on TV, or online, that you are officially picked up. It wasn’t like we were ever really on the bubble or anything, we were always told, “You’re back” and they’d let us hire writers for next year and things like that, but we always like to know for sure, especially as we get into the upper years.

AX: Do your leads Patricia Heaton and Neil Flynn still get excited?

HEISLER: Well, I mean, for Neil – where is excitement in Neil? [laughs] Neil doesn’t ever send you a text that has an exclamation point. Neil’s very even. They all are, I think. Our cast is very Midwestern. They’re happy to come to work, they’re happy to be here. Of course, you don’t have that first-season feeling of, “Oh, my gosh, we have a show!” You know how to do it by this point, so there is that. But I think after they have a long hiatus, they’re usually pretty excited to come back.

AX: Three of your leads are young people. Have you reached the stage of thinking, “We didn’t expect the kids to get this old, now what are we going to do?”

HEISLER: It’s weird. We’re kind of shocked when we see [reruns]. Now that the show’s in syndication, when we see the old [episodes], we can’t believe how much they’ve grown, we can’t believe how tiny Brick was [laughs]. We’re like [gasps], “He’s really gotten big.” I think our kids have been able to age – we just keep thinking, “What would happen at this age?” I think with Sue’s senior year of high school, I might prefer if she was in her junior year [laughs], because we kind of secretly had Axl be in high school for five years, but few people noticed that. We kind of didn’t say what year he was. But for the most part, it gives us new stories. I mean, I think with six years, you can’t do the same stories over and over and over, and I think the fact that Brick’s getting older is giving us new challenges. Now that he’s in middle school and looking at girls, what does that mean for Brick? I think this is the year of Sue. It’s big senior year for Sue, so she’s put a lot of irons in the fire over the years, and hoping some of them pan out, and she gets some wins. We’ll see what happens.

AX: At what point do you feel THE MIDDLE hit its stride? When would you say you figured out what the parameters were of what the show was and was not?

HEISLER: Let’s see. We’ve had some great seasons. A lot of people thought Season 4 was when we took off. I think the first season, you never know for sure. So I would say from 3, 4, 5 and on. I think it takes certainly at least a year and sometimes two to figure out what you do well, what works, what doesn’t. I think we’ve learned that the family is the guts and the heart of the show. Those are always the episodes everyone loves best. They love them all together. In the first season, it wasn’t until Episode Thirteen that characters went out on their own without Patty [Heaton]. Neil didn’t even have a story by himself until Episode Thirteen in the first season. I hope we’re still hitting our stride. We try to hold ourselves to a high bar.

AX: How do you and your writing/producing partner DeAnn Heline divide up your work on the show? 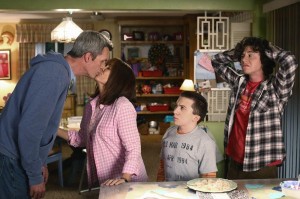 HEISLER: When we’re writing a script ourselves, we split the acts. We each write an act, and we all know what we’re doing because of the outline. But I’ll usually take the first half, she’ll usually take the second, and then it all goes together and we mix it all up. That’s really for efficiency and time.

HEISLER: I’ve sort of ended up with more car scenes, I think, just because. I tend to like to do really talking scenes. We’ve been a writing team for so long that I think she often writes the way I would have written it. It’s more like, “That’s in the first half, that’s in the second.” I direct and I do more of the editing and that kind of stuff and she stays in the writers’ room all the time, but I’m also going back and forth between those jobs.

HEISLER: What has to happen is, the family has to be together. They have to have a certain amount of struggle. We need big family scenes; they have to be in a car [laughs]. They can’t get a divorce. If they snark at each other, it has to be fun; they can’t turn into jerks.

AX: Could Sue get pregnant?

HEISLER: It depends how many seasons we go. Can she get pregnant in high school? No [laughs]. I think we ask ourselves those kinds of questions. I think we had the episode last year of what Mike was afraid would happen with Sue and Darrin [Sue’s boyfriend, played by John Gammon]. Sue said, “I’m not ready for that yet,” but the real “Mom, I need birth control” episode, I don’t think that’s necessarily right for our show. We try to be edgy and family-friendly simultaneously, but we are always conscious of who’s watching it and that it be a show people can watch with their kids. So when we say things that go “edgy,” usually we hope that they’re in such a way that only the parents would understand, and that the kids that are too little wouldn’t.

AX: Do you think you might ever add any more regulars?

HEISLER: I don’t know. I don’t really think so. Never say never. I guess it depends on how long we live. Shows have to evolve and if we go lots more seasons, you never, ever know. But I think the core always is the family. I feel like the poster is them, and they’re it.

AX: A lot of shows are supposedly about middle-class families, but the Hecks are one of the few TV families that are neither wealthy nor impoverished. Can Mike get a job that would make more money and change their income bracket, or could they go broke and lose the house?

AX: Do you think that organically, or do you think that with the knowledge of what everybody thought of the last season of ROSEANNE where they suddenly got rich, even though it turned out to be a dream?

HEISLER: I was a writer on ROSEANNE before that and I thought that was horrible. I think it organically. I just think it wouldn’t – I just don’t think it’s true to our people. I think the joy of their life doesn’t come from how much money they have, and I think that we’ll keep going like that.

HEISLER: [laughs] Sometimes. I think their share is maybe a little bigger than us, but …

AX: Do you feel like one of the reasons that THE MIDDLE fans appreciate THE MIDDLE is that it’s a successful show, but that it’s a kind of quieter success?

HEISLER: You know what is really funny? It’s true. We’re okay. As long as people know us and watch us and keep us alive and keep us on, we’re kind of very Midwestern about it. If you talk to Neil Flynn, he’s always like, “Don’t put your head above the wheat. Just keep doing your business, we can be slow and steady, and they’ll go, ‘Oops, look, they were here for ten years.’ It’s okay.” Absolutely. I think it’s okay because no one’s trying to shoot you down. As long as we have people rooting for us, that’s great.

AX: Are you working on anything else we should know about?

HEISLER: No. We’re so happy to be here at this point on the show that we love that we’re giving it all our time. They always ask us if we’re developing – we’re kind of like, “One thing at a time.”

AX: And is there anything else you’d like to say about THE MIDDLE right now?

HEISLER: Oh, God, I can’t remember. I told you about Sue and her teeth. Just everybody should watch, and I hope we’re around forever.