A solid and satisfying set of episodes of a terrific series 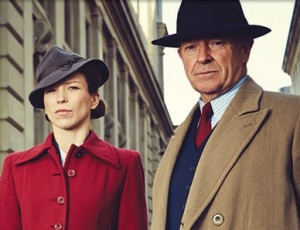 Although it’s been threatened several times before, Season 8 (or Series 9, as it’s known in Britain) really is the last of creator Anthony Horowitz’s wonderful series FOYLE’S WAR. Unlike previous seasons, which have run in the U.S. on PBS, Season 8 is available in America only via Acorn TV (at acorn.tv), which will now run/sell all of FOYLE’S WAR.

When FOYLE’S WAR first aired in 2002, Christopher Foyle, played by Michael Kitchen, was a police detective investigating crime in a small coastal town in the south of England during WWII, frustrated by not being permitted to do his part for the military.

The war ended in Season 6, but Foyle stayed on. In Season 7, he joined a division of the British Home Office. Despite, or perhaps because of, his effectiveness, Foyle’s work is not entirely appreciated by his superiors.

As Season 8 opens with “High Castle,” which debuts on Acorn February 2, a brief prologue in 1942 introduces us to two lads who sneak aboard a merchant ship with the intent of stealing some liquor. Then we move forward to 1946, when a university professor is found murdered. Foyle and his driver/protégé Sam Wainwright (Honeysuckle Weeks) soon learn that the deceased has some ties to an American oil company, whose founder (John Mahoney) now resides in England. Further, the murder victim has just returned from Nuremburg, Germany, where officials from the I.G. Farben chemical company are being tried for war crimes.

Sam, meanwhile, has her hands full at home. She’s pregnant and husband Adam (Daniel Weyman) thinks she should stop work, even though he’s trying to get a female factory worker (Jaime Winstone) reinstated in her job after she’s been displaced by a returning war veteran.

The details are suspenseful, even though viewers who have knowledge of I.G. Farben’s horrific history won’t be surprised by where the A story is headed.

In “Trespass,” which premieres on Acorn TV Feb. 9, Sam has cause to remark to Foyle, “Just like the old days, sir – police, dead body, grand old house.” The episode deftly weaves together separate storylines that deal on both personal and international levels with the chaos involved from all sides in establishing what would become the nation of Israel, and with British fascism and xenophobia that remained after the war had ended.

In “Elise,” which debuts on Acorn Feb. 16, the shooting of a character we’ve viewed as unimpeachable leads to the uncovering of dark deeds during the war, while Foyle and Adam find themselves dealing with two sides of the same postwar black market case. Sam, meanwhile, is reaching turning point.

The joy of Horowitz’s writing for FOYLE’S WAR is that it combines its procedural, espionage, historical and character elements in just the right amount, making us feel at home and immersed in its world while illuminating lesser-known details of the past.

Kitchen is perfectly authoritative, urbane and the soul of quiet rectitude as Foyle, and Weeks is as ever a paragon of discreet determination. Ellie Haddington is splendid as one of Foyle’s bosses and Conleth Hill, known to GAME OF THRONES fans as Lord Varys, plays a key role in “Elise.”

“Elise” is billed as the FOYLE’S WAR series finale. If this is indeed the case, it’s a shame to say goodbye to the show, but Season 8 is an entirely worthy last installment.