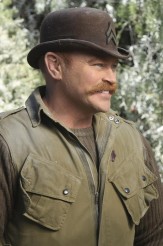 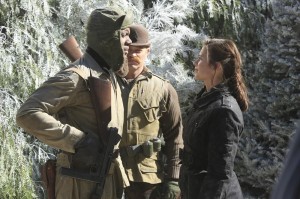 “The Iron Ceiling” was a turning point for Peggy Carter on MARVEL’S AGENT CARTER for a number of reasons.

First, Carter (the lovely Hayley Atwell) got to showcase her kick ass skills by killing a slew of nameless Soviet soldiers and leading the SSR and Howling Commandos into a facility to uncover why a typewriter is giving instructions in Russian to someone in the U.S. about Howard Stark (Dominic Cooper) technology. But it also showed that she has many more skills that can be leveraged by the SSR than anyone within the organization realized.

Of course, we all know about her prowess, but given she is a woman, they view her as only making coffee and getting lunch … until this episode where not only does she lead the team but is the most kick ass one of the bunch and even rescues Agent Thompson (Chad Michael Murray) after he breaks down during a fight. But Carter did what she wanted to do within the SSR and that is prove that she can be just as good as a man on a mission and earn their respect.

She also realized that she has been going about working with Stark in a very wrong way. Instead of superseding SSR and going behind their backs to help Stark and prove who really stole his technology and is selling it to the crime organization Leviathan, she should have been working with them to prove Stark’s innocence. Something that will no doubt come back to haunt her if the previews for the next episode are any indication.

Carter went so far as to even say bluntly to commander Dooley (Shea Whigham) that she believed Stark was innocent and not tied to Leviathan, trying to have them come around to her thinking and maybe seeing beyond just what is happening at face value. Of course, this isn’t going to help her out because Sousa (Enver Gjokaj) has been tracking down the woman in the blond wig since episode one and when he catches Carter without a cover up he sees her bullet wound scars that match to the photo they took of the woman in the blond wig (who was indeed Carter). Obviously, as the previews show, she will pay for her ill-advised trust in Stark and going behind SSR.

I liked that in this episode they gave some humanity to Thompson, who until this point has been just a jerk in all ways. His story about his time during the war gave some emotion to him that is important if they plan to keep the same cast around if this series gets renewed. They have already built up Sousa very well but keeping Thompson on the show with some character development is a good thing especially given this organization is what evolves into S.H.I.E.L.D.

It was also nice to see the Howling Commandos back in action especially how they respect and treat Carter given their history. Since Carter has been part of SSR she has been nothing but neglected and disrespected and to see the reverse of it was nice especially with Thompson seeing her in a new light.

With only three episode left, we have a lot of ground to cover as to the solution of the Leviathan plotline, if Howard Stark will be cleared, if Carter will earn her respect, if S.H.I.E.L.D. will be formed and much more. But it will be a fun ride if any of the other episodes have been any indication.