A brutal episode filled with eye gauging, stabbings and hoods getting gunned down 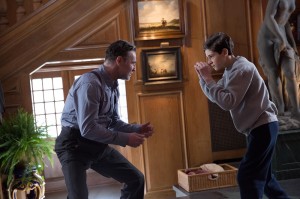 There were a lot of positives about GOTHAM this week in the episode aptly entitled “Red Hood,” which tells the origin story of the criminal that wears a red stocking mask and has been used by many characters over the years in the comics. Here, the red hood in question is just a regular mask that was cut out but somehow gives whoever wears it a sense they are unstoppable and overwhelming confidence.

This was the main storyline involving Gordon (Ben McKenzie) and Bullock (Donal Logue) as they try and track down a group of criminals that are robbing banks but giving portions of what they take to the populace – in some sort of twisted Robin Hood thing. But all of the gang members begin to get jealous of whoever wears the red hood and kill the next person wearing it – thus living up to the tradition of multiple characters donning the hood.

Eventually, Gordon and Bullock track the criminals down and are able to take the rest of them down but the mask gets passed along to another, younger troublemaker making it seem as if we are seeing where it all began and someone that would eventually face off against the Batman.

Meanwhile, the rest of the episode was extraordinarily brutal with eye gauging, knife stabbing and betrayal. Maybe the most important thing that happened outside of the Gordon story was Bruce Wayne (David Mazouz) and Alfred (Sean Pertwee) finally became interesting for the first time on GOTHAM. We are introduced to a former mate of Alfred, Reggie (the wonderful David O’Hara), who served in the military with him as part of a special ops and says he has fallen on hard times.

So Bruce and Alfred take him in and he immediately brings a different vibe the entire plotline with Bruce and Alfred as he is a harder chap that tries teaching Bruce some different more brutal ways of fighting and tells stories about Alfred’s less than heroic past. But in the end, Reggie has more nefarious plans in store so much so that he stabs his former friend in the gullet, leaving Alfred in dire straits and Bruce vulnerable to the Wayne Enterprises Board of Directors that didn’t take too kindly to the boy coming in and announcing he was going to be investigating them. By far, this is the most interesting thing they have done with the future Batman and that’s good because it has been sheer boredom up until this episode.

Fish (Jada Pinkett Smith) isn’t having a great time of things either after being kidnapped and locked away in a basement with a host of other people. Of course, she took over the basement and agrees to meet whoever is in charge. Well, she doesn’t meet him but meets the second in command that is played by horror icon Jeffrey Combs. After she threatens him, he threatens her back and before anything can be done to her she scoops out her own eye with a spoon – to avoid having her eyes taken as part of the illegal organ trade which this shop happens to be.

Gotham continues to be fine television and proves again it is willing to be brutal and bloody when it needs to be and with Bruce/Alfred finally beginning to get interesting, things will hopefully only get better.