Home » The Mysteries of Laura interview 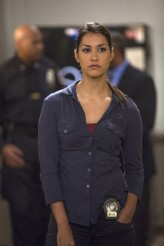 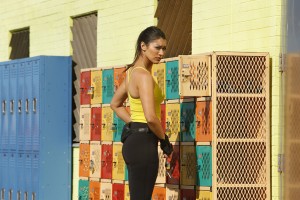 Gavankar is known to TRUE BLOOD fans for her role as shape-shifter Luna Garza. The Illinois native has also appeared on ARROW as Detective McKenna Hall, THE VAMPIRE DIARIES as Tessa, THE L WORD and the Web series NIKKI & NORA, among other projects. Gavankar’s feature credits include THINK LIKE A MAN TOO and SATELLITE OF LOVE.

AX: Is Meredith Bose your first non-genre character in awhile?

JANINA GAVANKAR: Yes and no. I do a lot of indie films. I work on a lot of friends’ projects that people don’t really hear about, so people know me for the quote-unquote bigger projects that have big machines behind it that let the press know about it. In that regard, yes. But otherwise, I play humans all the time.

AX: So really, your genre characters are the witch and the shape-shifter, but those are the ones that get the most press …

GAVANKAR: Yeah. And then on THE GATES, my heart was in a box, so maybe I was questionably a zombie. And there was another one – I’m forgetting what I was, but I have quite a few supernatural elements to my life. Do superheroes count? [On] ARROW, I was running around after a superhero. But it’s fine with me, because my favorite television show is BATTLESTAR GALACTICA. I mean, anyone who’s reading this knows that I’m a tried and true geek, and I like these kinds of things anyway.

AX: Has all of the kickassery in the genre shows helped you play a regular cop?

GAVANKAR: Absolutely. Because when I was running around in Vancouver shooting STARGATE: ATLANTIS, they taught us how to shoot P-97 submachine guns. No nine-millimeter is as scary as a P-97 submachine gun. After I did that, I was like, “Ah, I can do anything. [laughs] I can chase down human beings with this little …”

AX: You also had some jumping on people and punching and biting in TRUE BLOOD …

GAVANKAR: I’ve had some pushing over in my dog form, from dog to human, yes. I’ve had a very interesting, diverse career, yes.

AX: Is there any aspect of playing somebody who is sometimes a dog help you in any of your work on MYSTERIES OF LAURA?

GAVANKAR: [laughs] If we get a canine element – one of my friends in my hometown is a K9 cop and she actually sometimes works homicide, so if we ever do that, if we become K9 cops along the way, it will definitely help.

AX: A lot of actors sometimes, for different parts, will go to the zoo and observe a panther or an eagle or an animal they think has things in common with their characters …

GAVANKAR: It’s helpful in the physicality, when you’re trying to find your inner power, yes. I would say the animal that fits [Meredith] the best – right now, she’s a puppy. She wants so badly to be loved by the chief that she is just chomping at the bit, trying to get some love and attention.

AX: Is she liable to get or attempt to get closer to Jake the boss?

GAVANKAR: I believe that even though Meredith is a classy girl, and would never do anything to hurt her stature within the precinct, I do think she thinks Jake is really cute. And whatever happens from there, we’ll see. 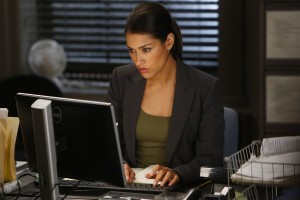 AX: Enrico Colantoni played the boss in the opening episode, before Laura arrested him for murder. When you saw you were working with Enrico Colantoni briefly, did you think, “Oh, good, he’s here – oh, rats, he’s not,” or did you know from the outset that he was only in one episode?

GAVANKAR: I knew from the outset. But I was like, “Enrico Colantoni!” [laughs] It was pretty cool. He’s so nice. And he and Debra have known each other for a long time, too. He was so fun to work with. But I had read the pilot before I even auditioned, so I knew.

AX: How is working with Debra Messing and Josh Lucas and Laz Alonso?

GAVANKAR: Debra’s a powerhouse. There is an absolute reason why she is one of the biggest TV stars of today. She’s completely worthy of that title. Laz and I get along very, very well. We hung out all today and he just basically cracked jokes on me and I was totally okay with it, and Josh – I feel like it’s Josh Lucas for president. His physicality is very politician when he talks to people and he’s a classy guy and I’ve definitely worked with people who aren’t that [laughs]. I really think we have a great group of people.

AX: How about Charlie Reina and Vincent Reina, the little boys who play Laura and Jake’s unruly sons?

GAVANKAR: Oh, they’re adorable in real life. They’re so lovely. I’m going to tell you something about them – it all comes down to the parents. Their parents own a company called Music to Your Home. And it’s a company that gives you instrument coaches. So if you’re studying if you’re studying music and you want a piano teacher, they will send one to your house. They’re huge supporters of the arts from a training perspective, so that’s great. I grew up studying classical music, so I love that. They told me this story where [the twins] made a little bit of money off of this pilot and [the parents] said, “With the money that you’ve earned, you can both get iPhones.” And they said, “Oh, great, we’re so excited.” And they did a little happy dance. And then they whispered to each other and they came back and asked the parents, “Can we buy one for our cousin, too?” Can you believe it? So already they’re displaying, they’re lovely children. I’ve worked with some kids that are not so great. They are a good breed. They come from good stock.

AX: How did you feel about Luna’s exit from TRUE BLOOD?

GAVANKAR: [laughs] I thought it was going to happen much sooner than it did. When I signed on to TRUE BLOOD, I signed my life away, so I was a series regular, and I was quite sure I was only going to live a year. And when I made it past one year, I was so excited to be able to come back [laughs]. So I knew it was impending doom for Luna. When you’re Sam’s [played by Sam Trammell] love, it doesn’t bode well for most girls.

AX: Well, in the books – spoiler alert – Sam ends up with Sookie.

GAVANKAR: He does, of course. That’s who I wish he did end up with. He’s the best of all of them, in my opinion.

AX: How was working on THINK LIKE A MAN TOO?

GAVANKAR: I had a very fun day doing a funny scene and a half.

GAVANKAR: I did a movie called THE WHITE ORCHID – it’s a bit of a thriller, Olivia Thirlby’s in it. I did a movie called WHO IS AFRAID OF V*GINA WOLF?, which is delightful. I just watched it in Germany with a room full of German women. It’s such a good movie. It’s available on demand. I did a few short films also. So I’m always busy. There are so many people whose projects I want to support. So I get around.

AX: Anything else you’d like to say about THE MYSTERIES OF LAURA that hasn’t been asked yet?

GAVANKAR: What hasn’t been asked yet? We’re not getting naked. It’s NBC. Sorry [laughs].

This interview was conducted at a party thrown in West Hollywood, California, by NBC for the Television Critics Association.