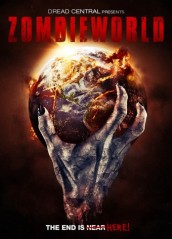 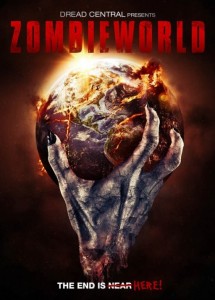 ZOMBIEWORLD is not to be confused with ZOMBIELAND, or indeed any other zombie feature out there. If anything, the nearest contemporary comparison might be the V/H/S horror film series, as both are horror anthologies with international entries. The main difference is that, per its title, ZOMBIEWORLD has a specific focus.

In fact, ZOMBIEWORLD has a binding element, a newscast by Marvin Gloatt (Bill Oberst Jr.), who is not about to let a little thing like a bite from a walking corpse get in the way of his reporting the global zombie pandemic.

There are entries here from around the United States, as well as Australia, Canada, Ireland, Spain and more. Even though the segments are tied together by Marvin’s broadcast, no one seems to have laid down ground rules for the diverse filmmakers, with the result that sometimes the zombies can run and sometimes they must walk, sometimes they turn instantly and sometimes it’s a slow transformation.

The most provocative, crazy and entertaining piece – at least for those not easily offended (and why would someone who is seek this film out in the first place?) – is the Spanish-language “Fist of Jesus,” directed by Adrian Cardona and written by David Munoz, which brings a whole new interpretation to Lazarus and the loaves and fishes. It has the crazy kinetic energy of something like THE RAID 2, with an absurdist take that’s reminiscent of Monty Python, if Python went for nonstop gore.

Cardona and Rafa Dengra co-directed “Brutal Relax,” which starts quietly and quizzically before going bonkers and letting us in on why its protagonist has been sent to vacation at the seaside.

At the other end of the spectrum, Australian director/writer Cameron McCulloch’s “Home” is almost meditative, as a woman alone contemplates her ever-dwindling options.

The wraparound section could be handled better. First, for no evident reason, Day 9 of the pandemic comes before Day 7. Second, although it goes exactly where we’d expect, it takes what seems like forever to get there. Third, the segments are interspersed in an order that feels very random. It’s okay to start with the you-are-there melee of “Dark Times,” but after that, we’re bounced around with seemingly no rhyme or reason. For example, “Dead Stop,” which involves an unwary police officer investigating a disturbance outside a convenience store, comes rather late in the running order, long after the world seems to have gone to hell. Having to figure out whether individual segments are part of the timeline or just haphazardly placed at the same time Gloatt continues to deteriorate is more distracting than artful.

Further, a few of the segments are relatively similar to one another, though there are enough variations to keep us engaged.

ZOMBIEWORLD has its flaws, but for fans of the living dead, it’s a mostly fun variety pack.