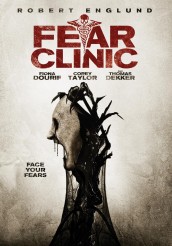 FEAR CLINIC, the new film from the estimable director/writer Robert G. Hall (LIGHTNING BUG, LAID TO REST) has a lot to recommend it. Written by Hall and Aaron Drane, it is legitimately creepy, has a good premise, trippy special effects and – no small prize in the low-budget horror genre – characters whose behavior makes sense in context.

Based on the five-episode 2009 FEARnet.com series, also written by Drane and directed by Hall, FEAR CLINIC takes us inside the title establishment, where Dr. Andover (Robert Englund, who headlined the series) is having a series of mysterious setbacks. Andover is world-renowned for his ability to cure phobias via an immersive device he’s invented, but the mechanism seems to have backfired.

While Andover stews in a funk of guilt and bewilderment, five of his former patients, all survivors of a lone gunman’s rampage, start having terrifying hallucinations. Sarah (Fiona Dourif) is determined to get Andover’s assistance, since it’s the only thing that’s helped so far. Since Andover himself isn’t sure what he’s dealing with, he’s hardly able to effectively communicate why he doesn’t think he can help anyone now. We learn that Andover’s prized creation has developed cracks, which cause surprising problems.

It’s perhaps not possible to show the ultimate in anything, but Hall and company do a good job of creating a wide variety of terrors that goes from the realistically horrifying – the gunman in the diner – to some Lovecraftian imagery that is visceral and chilling.

However, what’s especially gratifying in FEAR CLINIC is that we’re never once given cause to ask why anyone is taking any particular action. Andover is trying to figure out what’s gone wrong so that he can set it right, his patients are seeking help and the clinic’s maintenance men, played by singer Corey Taylor and Hall movie regular Kevin Gage, are just trying to keep the lights on. No one intentionally goes wandering around in a dangerous area – the danger keeps coming to them.

Englund is at once as versatile and stalwart as can be in a role that calls for a great many facets. Dourif exhibits intelligence, strength and vulnerability and Thomas Dekker is very good as a young man suffering from brain damage. The excellent makeup effects are courtesy of Robert Kurtzman and Steve Johnson.

There are a few dangling plot threads that seem as though they could have been woven together to make a stronger storyline, but overall, FEAR CLINIC delivers scares that are both plentiful and satisfying.

The disc includes a behind-the-scenes featurette.

For Los Angeles-area residents, actor Dekker is doing a signing at the Dark Delicacies Bookstore in Burbank on Tuesday, February 17 at 7 PM.