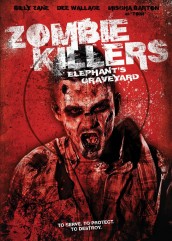 A zombie movie with more ambition than resources 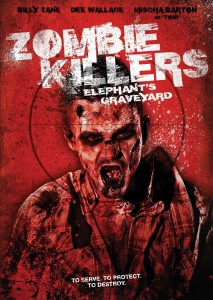 ZOMBIE KILLERS: ELEPHANT’S GRAVEYARD has more on its mind than it can accommodate. On the one hand, it’s frustrating to see intriguing plot threads float off into the ether; on the other, director B. Harrison Smith and his co-writer David Agnew Penn are to be commended for having storytelling ambitions well beyond the scope of the average low-budget undead run ‘n’ gun fest.

The little rural town of Elwood, USA, is fenced off from the walking dead. No one knows how much (if any) of the rest of the world still lives. Fears that the virus may be spread through the water supply make Doc (Brian Anthony Wilson) the most powerful man in town, since his tests supposedly show who is healthy and who is infected and must be “evicted.” He seems compassionate and thoughtful, but those who carry out his will are sadists. Meanwhile, ex-soldier Seiler (Billy Zane) has shaped all of the local young people into a militia that protects the perimeter.

There is a lot going on here, what with the quality of life issues, Doc’s motives, the ambiguous past between an older man (Brian Gallagher) and his pregnant younger wife (Mischa Barton), religious zealotry, infected animals, the suggestion of another predator at work and the phenomenon that provides the “elephant’s graveyard” segment of the title. The filmmakers clearly want to make us think and tell a story larger than what’s conventionally associated with stories about a small group of people fending off zombie hordes.

However, ZOMBIE KILLERS: ELEPHANT’S GRAVEYARD is a zombie movie. Having characters talk about how zombie movies always get it wrong doesn’t qualify as meta-humor here (the film is far too serious for that) and in fact brings to mind the adage about glass houses and stones. It is nice to see little flourishes like running zombies who still limp due to broken bones (and kudos to the stunt people pulling it off), but we’re not so far from regular undead mythology that this is a game-changer.

There are also some peculiar choices in how certain sequences are staged. When characters are shot by the militia, it is almost always out of frame. At first, this choice is so at odds with the genre’s bloody ethos that we’re primed to expect the characters to resurface alive. When they don’t, this seems like a weird experiment in being delicate, or budget-conscious in the wrong way, or both. For that matter, while the zombie makeups are full throttle and there’s a “delivery” scene that’s as disturbing as anything out there (horror points for this), ZOMBIE KILLERS is comparatively light on gore for something with this title.

Fans of the genre will want to check out ZOMBIE KILLERS: ELEPHANT’S GRAVEYARD more for what it tries to do than for what it achieves. It does provide something different, but it lacks the time and clarity to make its novelties into something more.