A nice starter car, no frills but it gets the job done

On first impression, the 2015 Mitsubishi Mirage ES is an odd bird of a car. When it arrived for review with its Kiwi Green coloring (I like to call it Lime) and compact size, it came across as almost too small and basic of a vehicle.

Yet, for all its no frills aura, the Mirage ES is actually a pretty decent car for those needing a  starter vehicle to get the job done and allow you to get to your destinations.

For this test, I took the Mirage from Los Angeles to Northern California. It was a quick trip, and I was alone so the car certainly is comfortable for one or two people with no worries.

My biggest concern was how the vehicle would handle going the long stretch of mountain over the Grapevine. Even in a regular vehicle, going uphill in the winding Grapevine roads can be a challenging, but the Mirage passed this test with flying colors.

The six hour drive was actually pleasant. Driving down Interstate 5 can be a slog with little variation, but if you manage to avoid traffic, it’s a pretty breezy clip.

Gas mileage was surprisingly good for this little vehicle, which is also a plus. 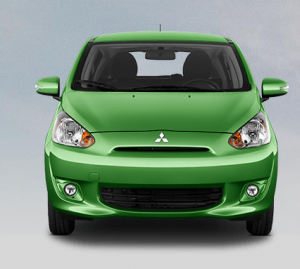 I have to admit that driving around in a Kiwi green car was a bit too showy for my tastes. That is part of the style of these cars though. The thinking, I assume, if you’re going to be small, give the car something that makes it standout, and all the colors are very colorful and vibrant including Infrared, Sapphire Blue and Plasma Purple. However, if you want a more conventional look the Thunder Gray is actually a pretty damn snazzy and Mystic Black is my favorite look of the bunch. So flashy vs. traditional is an option with these cars.

One of the things I came to enjoy about the Mirage was the ability to fit in comfortably in just about any parking space. Additionally, driving around was effortless on city streets. It did its job and did it well.

The drive back, this time at night, was also a breeze. Again, I prefer my cars a little beefier, especially driving at night alongside diesel trucks, but with little traffic, the road was all mine. 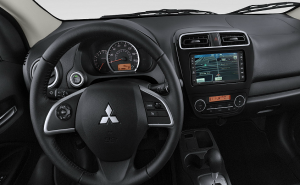 As far as comfort, this is a compact car, so the seats themselves are okay, but nothing special. There’s a USB port that allows you to hook up your music player (or phone). I still miss cars with a standard CD player, but those seem to be few and far between with everyone’s music now conveniently stored on phones or iPods. 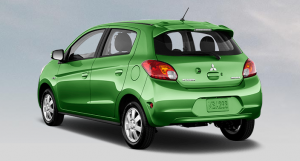 Trunk space is problematic. Clearly with the vehicle’s small frame, there’s not much there, there. So to get a Mirage as a family vehicle would probably not be very wise.

You do get a navigation system as part of the deal (though I’ve always found car navigation systems to be more trouble then they’re worth). Wireless Bluetooth capabilities is also a nice accessory.

The best part of the Mirage ES is starting price is around $14,095, which is a bargain if you’re looking for something simple, sleek, no frills and efficient.