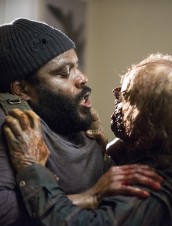 TV Review: THE WALKING DEAD – Season 5 – “What Happened and What’s Going on?” 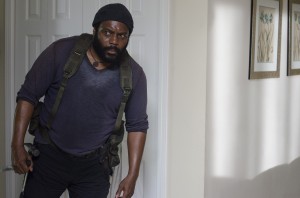 Chad Coleman as Tyreese checks an house for zombies on THE WALKING DEAD "What Happened and What's Going On?" | © 2015 Gene Page/AMC

I truly enjoy THE WALKING DEAD but sometimes they outthink themselves. Take “What Happened and What’s Going On?” for instance. I get that they needed a reflection-type episode given all the high drama and loss that has been going on since the beginning of Season 5 but at the cost one of your arguably better characters in the TV TWD universe is a bit hard to swallow.

Of course, this was the swan song for Tyreese (Chad L. Coleman) the highly emotional, massively strong man that has been part of the group for the better part of three seasons now. Of course, in the comics version of THE WALKING DEAD Tyreese is a strong, kick ass, highly emotional man as well but he ends up getting his head chopped off during the raid on the prison by the Governor (rather than Hershel in the TV universe).

In the TV TWD universe, Tyreese in some ways had become the emotional core of the group now that Rick (Andrew Lincoln) once again became the Ricktator. Tyreese questioned whether they should be killing everyone, if there was a better way to do something and had become a foundation of forgiveness and fortitude. When Bob (Lawrence Gilliard Jr.) had to be put down he stepped in for Sasha (Sonequa Martin-Green). When someone considered an all-out assault to get Beth (Emily Kinney) back, he offered a trade instead. Need I mention he saved Judith at the prison and carried her around for weeks after that?

He was a major character on the show from the standpoint of the emotional glue holding much of survivors together. Which is why the way he went out was probably the worst and dumbest thing THE WALKING DEAD could have done to start their second half of Season 5. If they wanted to make an impact, that’s fine, why didn’t they have him go out in a blaze of glory saving his friends or making a sacrifice where there was no other choice? But having him get bit by a zombie, only to succumb to those injuries is weak sauce on so many levels.

First, showrunner and writer of this episode, Scott M. Gimple, decides to create some sort of acid flashback mindf**k where we see the same visual glimpses over and again … sometimes as the future, sometimes as the past, sometimes who the hell knows. These images range from the Prison, to Woodbury, to Hershel’s Farm, to a skeleton in the forest, to a trapped walker in a car, to a car driving and more. Secondly, after Tyreese gets bit he begins to see the Ghosts of Futures Past including the Governor, Bob, Beth, Lizzie and Mika either telling him he’s better off because he’ll be dead or the Governor’s ghost berating him for not paying his debts (life debts).

I get it. Look how far we’ve come on the show and how far Tyreese made it. That’s clever and neat and stylish. I also get it is a nod to the comics where “anyone can die at any time” but again make it more important. Make Tyreese’s death mean something to someone. Not just from a random zombie in a town we won’t ever see again. He had probably one of the greatest heroic movies on the show by rescuing Judith and then having to tag along with Carol (Melissa McBride) after knowing she had killed his girlfriend. He even forgave her.

Now maybe, future episodes will show the impact here and I’ll be proven wrong that it was just a shock move and maybe it will have some meaning. But a character that was as good as Tyreese (in the TV universe) it seems like a senseless death. I have read some places where the death of Tyreese may have been because the group will need a lack of a moral compass with what they have to face coming ahead. Maybe a prelude to the zombie torsos that were piled up in the van (probably, definitely has something to do with that).

Now, does this episode beat a “Beth at the hospital” episode? Hands down. And the push to find a place where they can stop running and find a purpose again suggested by of all people Michonne (Danai Gurira) is a good one. But still, they could have done the same reflection, flashback acid mindf**k type of episode and still given Tyreese a proper sendoff.