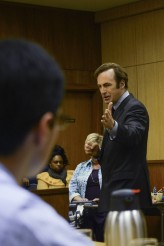 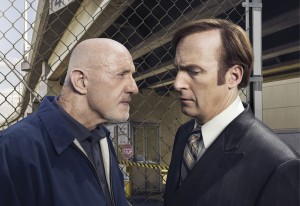 In the finale of AMC’s multi-Emmy-winning BREAKING BAD, Bryan Cranston’s indelible Walter White went out with a bang. However, the universe created by Vince Gilligan is back in a prequel, BETTER CALL SAUL, which premiered Sunday, February 8, before settling into its regular Monday-night timeslot at 10 PM the following night.

BETTER CALL SAUL centers on the character played by Bob Odenkirk, Walt’s dodgy lawyer Saul Goodman, back when he was still going by his real name of Jimmy McGill and still had integrity left to lose. Jimmy has a beloved, ailing older brother, Chuck (Michael McKean), and is just getting acquainted with Mike Ehrmentraut (Jonathan Banks), who BREAKING BAD fans know will eventually become Saul’s investigator.

Gilligan created BETTER CALL SAUL with fellow executive producer Peter Gould, who was a writer/producer on BREAKING BAD. Following a Q&A session for the Television Critics Association, where both Gilligan and Gould express great enthusiasm for their new show, the two men attend a small roundtable discussion with four journalists to talk about SAUL.

On whether BETTER CALL SAUL was born out of the conviction that Saul as a character should have his own series, or because Gilligan was reluctant to leave the BREAKING BAD universe and wondered, “What else can we do with this?”:

VINCE GILLIGAN: I don’t know if I’ve really admitted that completely to myself, but that’s got to be a part of it. Because I didn’t want to let it go. I think you’re probably on to something there. I haven’t actively put it in those words before, but there’s probably a lot of truth to that. But also, we just loved the character of Saul. And I should preface it by saying, there are a lot of characters we love in BREAKING BAD and a lot of characters that we truly believe could carry their own show. I’d like to be precise and say, this is not the only character we think could carry his or her own series, but somehow this one seemed – [to Gould] why do you think this one, of all of them?

GOULD: You know, we never learned that much about Saul. And there’s a hidden area. I have to say also, I think we’re all hoping it would work out, because we didn’t get everybody back together, but it’s like playing in a band with a lot of people you really like and you feel comfortable with and you’ve done work that you’re proud of. Why not continue? So there were people we’d worked with who were excited about doing this, and I think we felt a desire to make it work, but then, there was a long period where we had to walk around the back streets of Burbank while Vince was finishing the post on BREAKING BAD and talk it through and try to figure it out. People want there to be a show here, but that doesn’t mean there is. I’ll speak for myself – I was concerned about doing something that I wanted to reflect well [on BREAKING BAD], so I was very concerned about that. And then, the more we started talking about it, especially when we’d stop and get beer, I started having that feeling like Sherlock, “The game’s afoot,” where you start, “Well, there are worlds to be explored there. This is worth doing, this is fun.” I think people sometimes feel that it’s more engineered, it’s more a cool, distinct evaluation, but it really is just about what’s going to excite us. We are, as Vince likes to say, the first and best fans of the show, and so if we’re not excited about it, we shouldn’t be doing it. This one, I have to say, I started feeling, “This feels good,” but I don’t think we knew for sure that it was going to work. We still don’t know if it’s going to work commercially, but it works for us.

GILLIGAN: Yeah. And that moment – I think I said it, more exuberant than usual, I think – I don’t usually brag on our stuff, but it just sort of popped out of me earlier on that panel, because I didn’t know for the longest time. I hope I made that point. I knew I wanted it to be good, and we still don’t know if people are going to dig it –

GOULD: And we work just as hard. 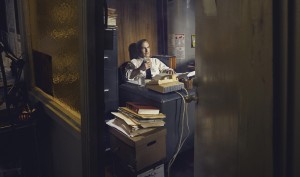 GILLIGAN: And we work just as hard, but I didn’t know – I didn’t feel as good about it as I do now, until that editing process, until seeing these actors together and the chemistry that they have. I can’t wait for you to see later episodes, because all the stuff, and you guys, when you get to see Rhea [Seehorn] as Kim, and you guys get to see more of all these characters, I’m really looking forward to that.

On whether Mike Ehrmantraut was chosen to be Jimmy’s foil in BETTER CALL SAUL because there were many areas of mystery in his background that could be filled in:

GILLIGAN: It’s [that], plus one other thing, which we always say is the chocolate and peanut butter thing.

GOULD: Yes. Very early on, it’s a very unusual process, because usually, when you create something, you sort of create it off to one side and then you present it to the business side. This one, there was an appetite from the company. They were interested if we had something worth presenting. And early on, the question was, is there somebody we should hold on to? And I think we both immediately said, “Jon Banks.” And part of it was, yes, Mike’s a wonderful character, but also, he’s a great contrasting character with Jimmy. He’s a man who hardly speaks, who weights every word. Jimmy is a motormouth. Mike has great physical courage, he’s got physical cool. Jimmy, you can practically see little sweat droplets flying off his head. And we just felt that having those two characters together, that there would be sparks. It would be like peanut butter and chocolate.

GILLIGAN: And there was one other very meat and potatoes practical point, which is that, not the very first time we meet Jimmy, but very shortly into knowing Saul, rather, on BREAKING BAD, we see that his private eye is Mike. So it makes practical story sense based on the canon, or the pre-existing story.

GOULD: Because there are so many cast members we would love to have brought back if it would have fit the story.

GILLIGAN: And maybe we will. Not to sound like a tease, because honestly, we don’t know ourselves right now. We’re trying to figure it out.