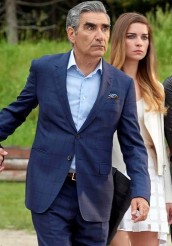 The co-creator/producer/star talks working with his father, Eugene Levy 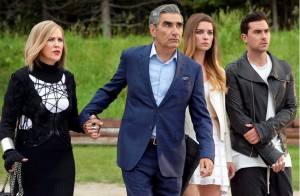 Pop Television’s SCHITT’S CREEK, Wednesdays at 10 PM, tells the story of the Rose family. Back when they were incredibly rich, the Roses purchased the little town of Schitt’s Creek as a joke. Now the joke is on them, as patriarch Johnny Rose, played by Eugene Levy, has gone broke and moved wife Moira (Catherine O’Hara), son David, played by Dan Levy, and daughter Alexis (Annie Murphy) into a motel in Schitt’s Creek, the only place they can now afford to live. Not only must the Roses cope with their reduced circumstances and the townsfolk, but they must also actually spend time with one another.

SCHITT’S CREEK was created by Dan Levy (pronounced to rhyme with “heavy”) and Eugene Levy, son and father. This is the younger Levy’s first scripted series as a writer/producer/star – he’s previously had film roles and hosted MTV LIVE – and also his first time collaborating with his comedy legend father.

As Eugene Levy explains at a Q&A panel for the Television Critics Association, “All through school, everything [son Dan] had been associated with, every play, I would offer my help and he would say, ‘No, I got it, I’m fine.’ So I always that that basically, even if he ended up in show business, ‘I got it’ would be the catch phrase, and I would never end up having anything to do with him in this business. So when he came to me and said, ‘Do you want to work on a show together? I have an idea,’ I thought it was a really fantastic thing. My heart was palpitating.”

A short while after the panel, Dan Levy is at a lunch hosted by Pop, also for the Television Critics Association. He’s happy to talk about working up in Toronto on SCHITT’S CREEK.

DAN LEVY: I feel like the idea of nepotism in entertainment – people are so quick to judge children of people in entertainment, I just thought, if nobody knows the association and I’m able to build something for myself, then I can introduce my dad – when people actually respect me for what I’ve done, as opposed to snap-judge why I got the job or what I was doing. So I waited, yeah. And again, you want to know that what you’re doing is going to work for yourself before someone comes along to help you. So it was very important that I get my footing and get some confidence in my abilities before I turned to my dad at thirty-one and said, “Let’s do something.”

AX: Part of SCHITT’S CREEK is obviously the parent/child relationship. Is that based at all on your family relationship?

LEVY: It is based on a writers’ room of family stories. It was a really fun show to write, because once all our writers came in, we just started talking about family fights, family hang-ups, different stories, and the storytelling that came from all of our writers is sort of what resulted in the Rose family. We’ve definitely written to my dad’s strengths, I think. And knowing him as a dad, when he worked, I really made sure that some of those eccentricities made it into the show, and I think it’s there. There’s a little fiber of my dad in that character.

AX: Did you develop this show specifically for Pop Network, or did you just develop it and think, “Where do we take it?”

LEVY: It was independently developed, and then when we were putting it all together, the CBC [Canadian Broadcasting Company] commissioned it, and then Pop came on board, and then we had our show. So once the ball started rolling, it was a very smooth process. I mean, for us, what was most important was the enthusiasm from most networks and the rest is sort of history.

AX: Is this primarily a fish out of water comedy, or is this about seeing snobs having to deal with people who are – or at least until now have been – less well-off?

LEVY: It’s fish out of water, but really, at its heart, it’s a family story that we’ve used a fish out of water scenario to help dramatize that story. And really, having them away from everything that they’ve turned to in terms of all the glue that held the family together and really forcing them into a motel room and having that season of a family examining what it means to be a family and what relationships are and having the time to concentrate and focus on who they are to each other and what they mean to each other. It really is a family story and the backdrop is a fish out of water setting, which has really helped to emphasize that storytelling.

AX: You’re on basic cable, and the rules have changed about what you can and can’t say, but obviously, they’re going to be saying “Schitt’s” a lot.

LEVY: “Sh**” was actually the one word that our writers’ room was banned from using in the writing process. We thought the name spoke for itself. Once you start watching the show, whatever provocation comes with the name goes away quite quickly when you realize that this is just the mayor of the town and this is his town and this is what it’s about. So we didn’t want to play into it. It’s not a show that’s really about that. So that was actually the one word that we weren’t allowed to use.

AX: So is this a very polite town where they don’t swear a lot?

LEVY: There’s some swearing. We just never play up the “sh**” card. But no, I mean, swearing always works when it’s necessary, so that’s how we approach the scripting of it. When a character needed to swear, they would swear.

LEVY: No. Maybe to a fault, I never thought about how I would play it. Once we started with this character and started to explore his journey over the first thirteen episodes, the focus was on David, and I knew the character so well on paper that I guess it sort of just made it easier to bring it to life. But no, we were focused on the character, and then the challenge for me was bringing that character to life.

AX: I don’t know if this is a question you can even answer, but do you have a division between your father as you know him and the public perception of Eugene Levy as a comedy actor/writer?

LEVY: He is a very gentle, kind, wonderful soul, and as Catherine said earlier, he is the loveliest person you will ever meet. And I think people probably see him as Jim’s dad [from the AMERICAN PIE movies] or they see him in BEST IN SHOW, and there’s sort of a goofy lovability about him, but behind closed doors, he is incredibly smart and so caring and warm and wonderful, and this whole experience for me was just a blessing.

LEVY: I think we wanted to give my dad a little bit of an edge in terms of the type of character that he is, because he always plays a certain type, the Jim’s dad character or the Jerry Fleck in BEST IN SHOW, and this character is a lot more short-tempered, and he’s come from building a multi-million-dollar empire. So the challenge for my dad, and for us in terms of what we wanted to get him to do, was really play someone that he’s never played before, and I think that Johnny Rose is an amazing character and it’s great to see my dad doing something a little bit edgier, which is great.

AX: Is your mom an actress?

LEVY: Absolutely not. She’s there for support and encouragement.

LEVY: My sister [Sarah Levy] has a very small part in the show, a very funny little part, and yeah, it’s been fun.

AX: Is there anything else you’d like to say about SCHITT’S CREEK that hasn’t come up this morning?

LEVY: This has been the most incredible experience of my career so far. And the time we spent and the group that’s come together, our production team, was the most lovely experience professionally. It happens so rarely that you get a group of people together who are all on the same page, who are open to collaborate. There were no egos on set and I think that’s why we have the show that we have, because it really was a result of an ego-less production. It was just a group of people working for the betterment of the show and every decision that was made was made for the show and not made with any sort of personal or ego agenda. So it really has been a dream come true for us and it’s surreal to be here promoting it.