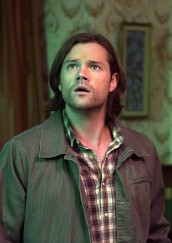 Aka Charlie and the Genuinely Surprising Plot Twists 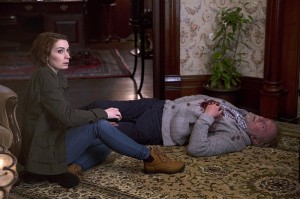 Sometimes it’s not a good sign when the “previously on” recap section feels like it runs as long as an actual episode, but on SUPERNATURAL’s “There’s No Place Like Home,” the reminders are both warranted and worthwhile.

Things we need to know for “Home.” 1) Dean (Jensen Ackles) is still struggling with the Mark of Cain, which makes him prone to violence. 2) Dean and Sam (Jared Padalecki), as well as the offscreen Castiel, are trying to figure out a way to get the Mark off of Dean before he succumbs to its dark, homicidal temptations. 3) Winchester ally Charlie (Felicia Day) blames herself for the car accident when she was a child that claimed her father and left her mother brain-dead; Charlie didn’t cause the accident, but her parents were on their way to pick her up early from a slumber party when their vehicle was hit by a drunk driver. 4) Charlie went to Oz (yep, that one) with Dorothy (again, yep, that one) to help fight the wicked witches that were threatening that magical land.

Since Charlie is ostensibly over the rainbow, Dean and Sam are very surprised to see her show up on an Internet video. They’re even more surprised to see that she’s apparently torturing some poor schmoe, since Charlie is normally sweet and pleasant. Both brothers rationalize this – after all, if someone who didn’t know what was going on videotaped some of their actions, it would look pretty bad.

However, when they catch up with Charlie, she is an unrepentant badass – and a mean one at that. Charlie leaves the brothers confounded – and then absolutely stuns them by pulling up in a yellow car seconds later, all smiles.

Light Charlie (as we’ll call her for now) explains what’s going on – there are now actually two of her. In Oz, the Wizard decreed that it was necessary for Charlie to unleash her dark side to win the war. To this end, Charlie actually became two separate entities, although Light Charlie knows they’re really still the same person. Dark Charlie won the Oz war single-handed, but she did some awful things to accomplish this. Now she’s back in this world to track down and kill the man responsible for the car accident that took her parents.

So far as Light Charlie knows, the only person who can put the two of her back together is the Wizard of Oz, and the only way to get back to Oz is with a key that is currently broken. More bad news – if one Charlie is injured, both will have the wound. Despite promising Sam and Dean that she just wants to talk to the former drunk driver (Barclay Hope), a realtor who bribed everyone involved so that he’d never be arrested for the incident, Dark Charlie kills him when she finds him, then flees.

Light Charlie, Sam and Dean are able to track down Clive Dillon (Duncan Fraser), a now-elderly former Man of Letters who, like Charlie, traveled to Oz.  Clive is in fact more like Light Charlie than expected – he also became two people while in Oz, and his dark side stayed there as the Wizard. Without the witches to oppose him, who knows what Clive’s dark side will do to Dorothy? There’s no way to get back to Oz to warn Dorothy, but because whatever happens physically to Clive will also happen to his dark half, Clive shoots himself (not fatally), which summons the very angry Wizard.

While Dark Charlie and Dean pummel each other on the lawn, the Wizard makes ready to kill Charlie and Sam. With Clive’s urging, Light Charlie forces herself to shoot Clive, killing both him and the Wizard. Dark Charlie is happy to see that both halves of herself can rise to the occasion and the two Charlies merge back into one.

Unable to return to Dorothy and Oz, Charlie offers to go to Italy to follow up a lead that may help Dean with the Mark of Cain.

Charlie’s struggle with the two sides of her personality are such an obvious analogy for Dean’s problems with the Mark of Cain that the teleplay by Robbie Thompson doesn’t feel the need to put the issue into words too often. Ackles has some great, thoughtful reactions, and beautiflly plays Dean’s helpless guilt after beating up Charlie. Day has a lot of fun with the kickass version of her character, as well as bringing back the enthusiasm we normally associate with Charlie. Paul McGillion of STARGATE: ATLANTIS has a few scenes as one of the guilty parties who (albeit with much pain) survives Charlie’s wrath.

For all that the episode illuminates many of SUPERNATURAL’s ongoing themes, it also has some great surprises, starting with Charlie beating someone up and moving on to the revelation that there are two of her. The Wizard turning out to be somebody’s bad side is also an intriguing tweak, as is Charlie’s method of reuniting herself. It’s fun to have some honest-to-Pete plot twists, and a reference to Dean and Sam as Rocket and Groot does not go amiss.

The “you had it in you the whole time” theme is of course a huge part of the OZ movie mythology that’s been with us now for nearly eight decades now, and it resonates wonderfully with SUPERNATURAL’s ethos. There’s no place like home inside yourself, indeed.