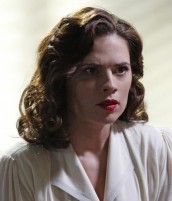 A good episode where characters die, Peggy reveals all and sets up a good finale 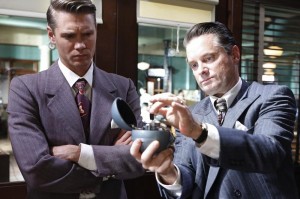 The penultimate episode of the first season of MARVEL’S AGENT CARTER was extremely good in wrapping up all the storylines going on the show in preparation for what should be a very good finale.

In “SNAFU” we had the culmination of the arrest of Peggy Carter (Hayley Atwell), the reveal of all the things Peggy has been doing behind SSR (the government branch that will morph into S.H.I.E.L.D.), the reveal of the villains behind Leviathan including the evil Dr. Ivchenko (Ralph Brown) that has been inside of SSR for the last few episodes and a sacrifice from the big boss man Roger Dooley (Shea Whigham) after being roped along by Dr. Ivchenko to do his dirty work.

After questioning Peggy about why she was behind being at all these locations throughout the first season where either people were killed, technology was stolen or something bad went down, they didn’t believe Peggy regarding any of her answers. Only after Peggy sees Ivchenko sending Morse code signals to someone else does she spill the real beans about working as a double agent in order to clear Howard Stark’s (Dominic Cooper) name and why she didn’t work with SSR. She effectively points out that to them, Peggy was a coat rack, not seen or heard and only good for getting lunch or coffee. So she was able to come and go as she pleased without anyone really questioning it.

It was only the good detective work of Sousa (Enver Gjokaj) that was able to piece everything together.

Meanwhile, Ivchenko – who we see at the beginning of the episode learning his skills during World War II to comfort injured Soviet forces – has Dooley wrapped about his finger (literally) and has him lock away both Peggy and Jarvis (James D’Arcy), dismiss the scientists working on Stark’s technology and finally steal Project #17. Oh and he straps Dooley to a Stark device that doesn’t work right and burns through anything it touches.

Dooley instead of trying to get the device off, opts to take himself out and he’s blown up as he dives through the SSR window in a dramatic fashion.

We end up seeing a taste of what Project #17 is after Dottie (Bridget Regan) and Ivchenko release a weird gas in a movie theater that turns all the movie goers into stark raving mad people with blood lust. The final scene is of a movie worker opening the theater to see a slew of dead bodies mangled and bloody.

This is why AGENT CARTER has been good in its first season, it has been unflinchingly brutal in just killing off not just random people but some of its decent characters. This was a good episode because it did everything they need to do to finish the first season (hopefully not the last) in good fashion with the conclusion of the Leviathan arc.