Home » two and a half men interview chuck lorre 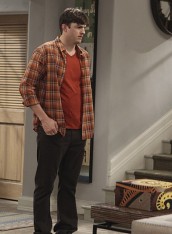 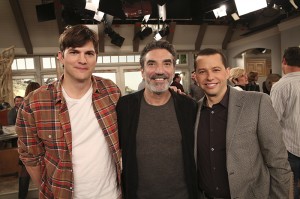 With four hit series on CBS, all of which have won Emmys, Chuck Lorre is the indisputable king of comedy at the network. Yes, TWO AND A HALF MEN, which Lorre executive-produces and created with Lee Aronsohn, is finishing its twelve-year run with a one-hour special on Thursday, February 19. This still leaves the other shows Lorre executive-produces: THE BIG BANG THEORY, created by Lorre and Bill Prady, now in its eighth season, MIKE & MOLLY, now in its fifth season, and MOM, created by Lorre, now in its second season.

When Lorre is at a party thrown by CBS for the Television Critics Association, he takes some time to talk about his wide variety of series.

AX: You’ve said you don’t like the word “empire” to describe your group of Emmy-winning shows, so what word do you like to use to describe what you’ve got here?

CHUCK LORRE: Um, a wavy field of gratitude. [laughs] I don’t know. My goal has always been in every day, on every page, to try and make people laugh. And that’s our mission, if we had one. I don’t want to waste that opportunity to cause laughter. That seems like a worthy goal to have when you get up in the morning.

AX: With TWO AND A HALF MEN, why did you decide to wrap it up at twelve seasons?

LORRE: We were having conversations with CBS last winter about whether we should wrap it last year. And they came back and said, “Do one more season.” And we said, “That sounds right, let’s do that.” And I talked to [series stars] Jon [Cryer] and Ashton [Kutcher], and they were both game. That was a big part of the conversation – “You still want to do this?” And they both said, “Yeah, we’ll do one more year.” Then we said, “Yeah. Let’s step up one more time and see what we can do.”

AX: Jon Cryer’s character Alan has been kicked in the teeth so many times over the seasons, will he ever get a victory?

LORRE: He’s marrying a billionaire, [laughs] how bad is that?

AX: You’ve had some well-publicized issues with some of the now-former TWO AND A HALF MEN cast members. Is there an upside to that?

LORRE: It makes me more grateful. It makes me really grateful, because I’ve been really blessed to work with remarkable, wonderful, joyful people. The BIG BANG cast, the cast of MIKE & MOLLY. The cast of TWO AND A HALF MEN, by and large, has been a joy, and for eight some-odd years, it was a joy with Charlie [Sheen]. We had a great time. Angus [T. Jones] spent more time doing TV on this Earth than he’s spent [doing anything else]. He spent ten years doing television, so he wants to go to college. I think it’s really commendable that he wants to make that the next part of his life, and it really is wonderful. And [MOM] was an experience of a lot of fun.

LORRE: Very much so.

AX: So is this a theme that resonates with you?

LORRE: I find it infinitely intriguing, healing your life.

AX: How would you describe MOM?

LORRE: It’s about someone trying to start their life over again and repair the damage of the past and lead a happier, healthier life, but not necessarily having the tools to do so, like a carpenter with a hammer and a screwdriver trying to build a house. 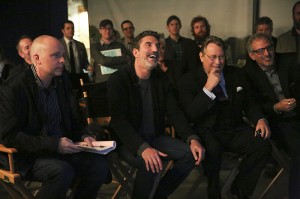 AX: At what point did you decide your heroine Christy, played by Anna Faris, should be a waitress at a restaurant?

LORRE: The initial idea was that she be literally surrounded by something that she needs to gain control over, which is alcohol, that it be almost the air that she breathes, and that in that environment, she needs to pull her life together. I think that’s probably going to become less important that we go on, the environment of work. It’s always about people. It’s never where, it’s who. It’s the people that she’s in relationships with.

AX: How would you compare the tone of MOM to your other shows?

LORRE: We’re trying to ground it in as much reality as we can muster. It’s certainly dealing with some serious issues, and you don’t want to be flippant about serious issues, but you don’t want a melodrama, either. I thought that there was an opportunity in television now to do a sitcom that tackles some real issues, issues that real people face in their daily lives that we don’t necessarily talk about, in this genre. It gets talked about all the time in television, but not necessarily in half-hour comedies. It used to be.

MOM very definitely was a desire on my part to go back to something I started in ’93 with GRACE UNDER FIRE, telling a story about a single mom trying to keep it together. And I thought it was a great story back then, and I only did that show for one season and then I left. And I really wanted to go back and try it now and see if we could tackle real stories, make them worth watching, make them funny, but without being disrespectful.

AX: With MIKE & MOLLY, did you expect that to pop the way it did?

LORRE: From the beginning, I thought [leads] Melissa [McCarthy] and Billy [Gardell] were spectacular together. From the first time they sat in a room and read a scene together, it felt like, “Okay, this is a TV series. These guys are incredible together.” So that’s been a lot of fun. It’s been a great joy and incredibly satisfying to watch Melissa’s film career explode.

AX: What are your hopes for BIG BANG this season?

LORRE: I just want to make sure that we stay true to the characters each week and push the envelope where appropriate. It’s been an unbelievable experience the last couple of years. The show has been accepted. We’ve got Steve Molaro and an amazing writing staff that have brought the show to a new level last year, clearly brought it to a new level. I’m glad I get to hang out [laughs].

AX: BIG BANG THEORY doesn’t just have fans, people who enjoy it, it actually has a fandom in the way STAR TREK has a fandom.

AX: How do you like having that kind of fandom around one of your shows?

LORRE: It’s unbelievable. It’s overwhelming, it’s a thing that you never anticipate will ever happen, and then when you wake up one day and you go, “This is really happening” and you see the reception this is getting, it’s extraordinary. I don’t want to miss a minute of it, is my feeling. I want to stay around for every second of it, because this is one thing that just generally never happens.

AX: How edgy do you like to get with your comedy?

LORRE: Well, it’s easy to shock people. It really is. It’s easy to do material that’s shocking. The bar for edginess is whether or not it’s truly funny and meaningful to the story and the characters. If it’s not and it’s just shocking, I try and avoid that.

AX: Norman Lear was another highly prolific, successful writer/creator/producer. Do you see similarities between your career and his?

LORRE: He was a groundbreaker. He reinvented television in a matter of a couple of years by tackling issues that were verboten. I mean, no one discussed the stuff he discussed and made it funny. So it’s quite a high bar. I don’t want to discuss that bar, other than the fact that it’s an inspiration.

AX: Did you ever think you would have four shows all running on one network?

LORRE: Thirty years ago, I was in [the Beverly Hilton] hotel playing “Bad, Bad Leroy Brown” for a bar mitzvah, so [laughs] everything that’s happened in my career has been a gift. Talk about a second chance.

AX: Do you have any desire to get into drama?

LORRE: I’m working on some things that are in the dramatic world, but not in television.

AX: So you’re branching out into either features or theatre?

AX: Any interest in doing features?

LORRE: I’m not doing anything in features right now. I actually like television. I like the immediacy of it. I think it’s a great way to reach an audience and tell a story.

AX: Are you going to want to do a fourth show when TWO AND A HALF MEN goes away?

LORRE: I have no plans right now. My plan probably will be to take a nap.

AX: What’s your optimum number of shows to have on the air before you explode?

LORRE: You know, there comes a point of diminishing returns when you simply can’t be available and you can’t help, you can’t participate, because there are not enough hours in the day, and you want to avoid that. I do. I don’t want to put a show on the air and then not be able to be useful on it.

AX: So you think three shows might be a good number to go with for now?

LORRE: [laughs] Three would be terrific.

Article Source:Assignment X
Article:  Chuck Lorre on the end of TWO AND A HALF MEN – exclusive interview