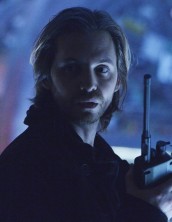 The actor talks his time-traveling role 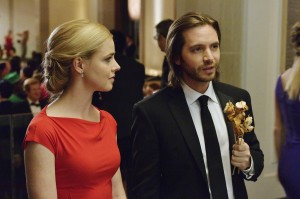 In Syfy’s 12 MONKEYS, Fridays at 9 PM, Aaron Stanford stars as James Cole. Cole is one of the few survivors on a disease-decimated Earth, and one of even fewer who are still remotely civilized. He’s sent back to 2015 by a small team of scientists to try to stop the plague from happening in the first place, but the mission goes awry, with the result that Cole must travel all over the temporal map in an effort to prevent both the epidemic and worse alternatives from occurring.

12 MONKEYS is based on the 1995 feature film of the same name, which is in turn based on the 1962 French piece LA JETEE. One difference between the TV series, adapted by Terry Matalas & Travis Fickett, is that in this version, Cole can alter the past.

The Massachusetts-born Stanford previously spent four years playing Seymour Birkhoff on the CW spy thriller NIKITA, which shot in Toronto, like 12 MONKEYS, and which also had Fickett and Matalas on its writing staff. Stanford’s other credits include the title role in the series TRAVELER and playing Pyro in X-MEN 2 and X-MEN: THE LAST STAND, as well as a guest gig on MAD MEN.

AX: At the time 12 MONKEYS came along, were you actively looking to play a series lead?

STANFORD: I was looking to work. So stumbling into a series lead is just a nice piece of luck. I’ve worked with both Terry and Travis before on [NIKITA], and we work well together, and they always tried to write specifically for me, I always loved the material they did, so when they told me they were working on something new, I was thrilled to come on board.

AX: Is it tough staying in Cole’s mindset? Because he seems depressed, to put it mildly, most of the time.

STANFORD: Yeah, it is heavy. He’s a heavy guy. Luckily, I’m a depressive by nature, so it’s not that difficult for me to stay in that place.

AX: So it doesn’t bum you out further than you were bummed out already?

AX: What is the key to playing Cole?

STANFORD: I don’t know if there is one key to playing him. The key to playing any character is trying to understand the circumstances and understand what it is they’re going through and equate it to experiences from your own life and things that you’ve witnessed. So for Cole, although he’s a survivor of the apocalypse, which is very difficult to relate to, one thing I can imagine and relate to is this idea of him as a veteran. He’s a war vet, he’s been through combat, he’s seen a lot of trauma, he’s seen a lot of horror. So although it’s a science-fiction flight of fancy that he’s from the future, the reality of his experiences can be grounded in our world.

AX: Have you thought about, “What would it be like if my body was a time machine?”

STANFORD: It’s meant to be a painful process. The time travel experience takes something out of him every time that he does it, and it takes something out of him that cannot be put back in. So I think what they’re working with is that there will be a finite number of times that he’s able to do this. So working with that idea of things being extracted from your body and life being sucked out of you – basically, the [pilot] director, Jeff Reiner, told me to imagine the worst hangover I’ve ever had in my life and multiply it times several million. 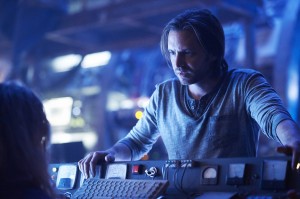 AX: Is that going to be tough to sustain from season to season?

STANFORD: I’m going to have to do a lot of drinking. That’s the bottom line. [laughs] You know, he does recover. He’s not on the ground [in pain] the entire time, but the experience does take something out of him and I think he will have to see that in order to live through his arc. He’s chipped away at, bit by bit.

AX: And what’s his relationship with Amanda Schull’s character Dr. Railly? Is Cole attracted to her, is he too bummed out to be attracted to anybody …?

STANFORD: I made the choice not to think about it too much. The stakes are so high, the circumstances so extreme, that there’s not really time for a lot of romance. Certainly, there’s an electricity, there’s definitely an attraction, there’s a charge between them, and they’ll explore that however they explore that as the series goes on, but it’s certainly not your textbook film romance.

AX: Are you happy about working in Toronto again?

STANFORD: I am. It’s a great city. I was there for three-and-a-half years. Sometimes going on a new location, it can be a little daunting – you don’t know where anything is, you don’t know anybody, you’re isolated, and I get the pleasure of going back to a city that I know and love and where I have a lot of friends.

AX: Have you had to learn how to do anything for this role, like how to handle X kind of gun?

STANFORD: They [had] me going up there a couple of weeks early to do stunt training. It’s a very active role. There’s a lot of combat, there’s a lot of firing of guns.

AX: Is there anything else you’d like to say about 12 MONKEYS right now?

STANFORD: Just that I think it’s going to be a fantastic show. I’m very, very excited about it, and I can’t wait for people to see it.

This interview was conducted during Syfy’s portion of the Television Critics Association press tour at the Beverly Hilton Hotel.

Related:  12 MONKEYS showrunners give the scoop on Season 1 – exclusive interview