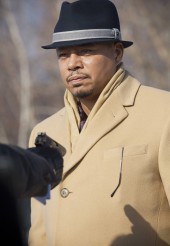 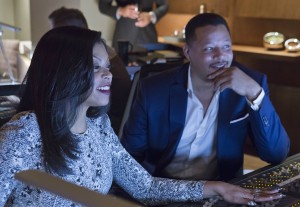 Fox’s new drama series EMPIRE, Wednesdays at 9 PM, has turned into the kind of popular and ratings hit that would thrill its ultra-ambitious, powerhouse characters. Created by Danny Strong and Lee Daniels, EMPIRE is set in the world of hip-hop music, where terminally ill recording kingpin Lucious Lyon (Terrence Howard) wants to select one of his three sons – businesslike Andre (Trai Byers), talented, kind, gay Jamal (Jussie Smollett) and gifted but irresponsible Hakeem (Bryshere Y. Gray) – to take over when he’s gone. Lucious’ ex-wife Cookie (Taraji P. Henson) returns from prison and would like to control the situation herself.

Ilene Chaiken, whose previous credits include BLACK BOX and THE L WORD, is one of EMPIRE’s executive producers, along with Daniels, Strong, Brian Grazer and Francie Calfo. We catch up with Chaiken at the EMPIRE premiere party on the rooftop of Hollywood’s W Hotel to discuss her work on the show.

AX: What is the division of responsibility between you and Lee Daniels and Danny Strong?

ILENE CHAIKEN: There is no division of responsibility. We all work together to try and make the show that Lee and Danny created. I’m the show runner, I have the show runner responsibilities. I check in with them daily when they’re not where I am to make sure that what I’m doing is true to their vision. They’ve created an amazing show.

CHAIKEN: Some people are better at some things than others, but it’s not as if we have a writer who writes this character. We all make up the room. We don’t divide and conquer – we all work together, we break stories together and then we break off and write our episodes. It’s very much a collaborative process.

AX: Your lead actors Taraji P. Henson and Terrence Howard have both said they felt this was challenging material because of the subject matter. Do you feel that EMPIRE is risky, or do you feel that broadcast can do this kind of thing now?

AX: Is EMPIRE actually about hip-hop, or is just set in the world of hip-hop, and it’s really about something else?

AX: Can you talk about what makes hip-hop different from other forms of music?

CHAIKEN: I can’t tell you. I am not the right person to talk about it. I am not authoritative enough and I don’t want to make a fool of myself. I’m learning it as I write and I’m working with writers who really know those answers and have them on my writing staff. They’re specifically and carefully chosen, and they should be talking about that.

AX: Can you talk about how, overall, the element of music influences how you’re writing EMPIRE, versus a drama set in a non-creative world? 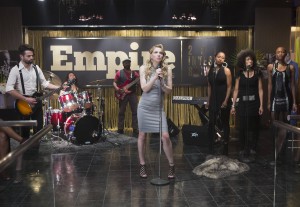 CHAIKEN: Music is story in the show. The show is infused with music. We never do music just for the sake of music. So it creates a rhythm and a drive to the writing. The writing has a beat as seductive as the music. It very much sets the tone of what we do.

AX: Does the production team commission new music to be recorded, or do you take existing music and use that?

AX: When guest artists appear, are they playing part of Lucious’ stable of singers/songwriters?

CHAIKEN: Sometimes they are. Sometimes they play characters, depending on the individual artist, sometimes the artist is willing to come on as her or himself and say, “I’m on Empire Records.” Because it’s a little fiction, and it’s a fiction we can get away with.

AX: Can you say whether Fox’s experience with making the musical series GLEE has helped with EMPIRE, even though the styles of music and the stories are totally different?

CHAIKEN: That it’s just going to be a great, wild ride and that every episode will take your breath away.