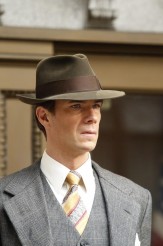 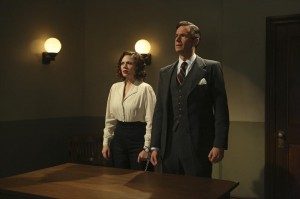 On ABC’s MARVEL’S AGENT CARTER, which has its first-season finale Tuesday, February 24 at 9 PM, Hayley Atwell’s titular character is the reluctant ally of billionaire inventor Howard Stark (Dominic Cooper) just after WWII. While Carter can’t trust Stark all of the time, the two of them both rely greatly on Stark’s butler Edwin Jarvis, played by James D’Arcy.

D’Arcy, born in London, recently appeared in the feature films JUPITER ASCENDING and LET’S BE COPS. Last year, he starred opposite Chloe Sevigny in the series THOSE WHO KILL as a troubled American forensic psychologist.

Jarvis is already known to Marvel movie audiences as the artificial intelligence assistant, voiced by Paul Bettany, of IRON MAN hero Tony Stark. The Edwin Jarvis we see in AGENT CARTER is the human basis for Tony’s sidekick.

At a party thrown by ABC for the Television Critics Association, D’Arcy expounds on playing the actual intelligent man that precedes Stark’s artificial simulacrum of his persona.

JAMES D’ARCY: It is a truth of the comics that the real-life Jarvis becomes the Jarvis in the Iron Man costume becomes the Vision later on. That’s the comic book mythology.

AX: Did you study Paul Bettany’s voice performance at all?

D’ARCY: No, I predate Paul Bettany. There’s nothing to study. He should go back and redo all of his voice work now, based on what he’s seen of me [laughs]. No, I don’t need to. He’s an A.I. system. He’s Tony Stark’s memory of what the real-life Jarvis is like, so he doesn’t have to sound like me, he doesn’t even have to behave exactly like me, he has to behave like Tony Stark’s memory of me. So that’s the one thing that we know, is that I’m going to meet Tony Stark and I’m presumably a big part of his life in his childhood. But we haven’t had any conversations about that, I’m just telling you what is. It’s pretty self-evident.

AX: Besides the writing on the page, were there any models for Jarvis that you had in mind at all?

D’ARCY: There were anti-models. There were so many people who played butlers, and I didn’t want to do something that you’ve seen before. I didn’t want the viewer at the end of the first scene to go, “Oh, right, that guy, I don’t really need to ever see him again, because I know exactly what he does.” I wanted to do something a little bit different, a little bit surprising. And it is kind of gratifying that the relationship between Peggy and Jarvis seems to be somewhat popular, so I hope that that’s sort of working in a way that is attractive to people.

AX: How do you see the relationship between Jarvis and Peggy Carter?

D’ARCY: With Peggy, I mean, it’s like a funny brother/sister relationship, isn’t it? He can call her on her sh**, and he can do it very politely, and he can be a guide to her and a confidante, which is obviously important and it was discussed at the panel. At the same time, he’s got a wry irony and doesn’t take any of this war terribly seriously – he has other interests, and he makes that clear. I think that’s very grounding for Peggy, because she can get swept up and lost in this pretty easily. And then there’s the fact that secretly, he’s loving it. In my head, Jarvis thinks that he’s Jackie Chan. That’s what I admire. Jarvis thinks that he is a badass.

AX: And what do you think Jarvis’ attitude is towards Howard Stark?

D’ARCY: I owe him a great, great debt of gratitude. So that’s the starting place for that relationship. I’m enormously grateful to him. I don’t know that I necessarily approve of everything that he’s done.

AX: Does Jarvis feel that he’s sometimes all that stands between Howard and complete disaster, or at least complete disorganization?

AX: Who do you think Jarvis is at his core?

D’ARCY: Kindness and generosity, I can play that. And then if it’s funny, great, and if it isn’t funny, it doesn’t matter, because I don’t think that’s the heart of who this guy is. So I went for that, and that was the hook that I was able to get into.

AX: How is it playing a character in the period immediately after World War Two?

D’ARCY: The costumes are great, the cars are great, the sets are great, all that kind of stuff. Really, though, what I like is the way people treat each other. Particularly Peggy and Jarvis. They call each other “Miss Carter” and Mr. Jarvis.” They look each other in the eye, and they’re polite. We’ve sort of got that the other way around now, because we’re all talking to each other while texting at the same time. I found that [courtesy of the period] rather touching.

AX: After playing American in THOSE WHO KILL, is it a relief for you to be able to play a character with your normal speaking voice?

D’ARCY: I wouldn’t say it’s a relief, no. I love being an actor and I love a variety of roles. I like challenges, so no, the accent is rarely the major thing that worries me, to be honest.

AX: When THOSE WHO KILL ended, were you actively looking for something lighter to do, or was AGENT CARTER just a good thing that came along?

D’ARCY: No, I had just come off BROADCHURCH [Season 2, premiering in the U.S. on BBC America Wednesday March 4], which isn’t a light show at all. I was still shooting BROADCHURCH when this came along. So I didn’t really think about that. I was very happy when it did come along. I’ve never done any comedy before, so it was great.

AX: Are you a comic book fan at all?

AX: Did you know the Marvel universe movies at all?

D’ARCY: I would say I’ve seen most of the movies.

AX: Do you have any feeling about being a part of this Comic-Con-culture show?

D’ARCY: I’m very happy to be part of a very good show. I think the writing’s spectacular. Beyond that, I haven’t had a great deal of exposure to any of that, so we’ll see what that looks like in the future, I guess.

AX: What would you most like people to know right now about AGENT CARTER?

D’ARCY: I hope that audiences have as much fun watching it as we did making it.