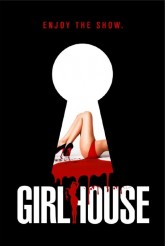 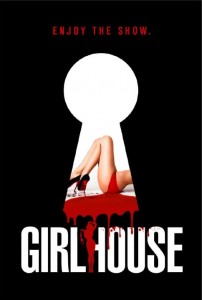 The power of technology and the horrors that we let into our lives as a result are at the center of GIRL HOUSE.

After waxing poetic about the true nature of porn and how it has gone mainstream and isn’t what it used to be in the public eye (pointing to the success of transition stars such as Sasha Grey among others), Kylie gets to know all the other housemates before doing her thing and attracting the eye of a rather aggressive and troubled individual only known as Loverboy (Slaine). Of course, in the opening of GIRL HOUSE we see a young Loverboy getting tormented by young girls (including a cameo from GOTHAM’s Camren Bicondova) where he actually ends up killing one of them by pushing her off a bridge after she wipes out on her bike. So the guy already isn’t stable given he’s killing little girls at an early age, so when he fancies Kylie (who uses her real name for some reason when on cam) he becomes a little more than obsessed, especially when he sends a photo of himself and the girls all make fun of him. Don’t make fun of Loverboy! Loverboy is sensitive!

So the first half of GIRL HOUSE focuses on Kylie’s decent into taking her clothes off and finding a romance with a former High School mate who happens to have seen her on camera and tracks her down in a not-at-all a stalker way. Along the way we get some gratuitous nudity (or maybe with a film focused on girls taking their clothes off for money maybe isn’t gratuitous because that’s the storyline … sorta like SHOWGIRLS). And then the second half of the movie turns into what has to be called an homage to HALLOWEEEN right down to Loverboy donning a very similar mask and killing the iron-clad security at the Girlhouse compound before going on a murderous rampage on all the hot chicks in brutal ways. Oh yeah, he also is pretty unstoppable and has inhuman strength.

GIRL HOUSE doesn’t have any original things going on here. Hot chicks dancing on a camera, mass amounts of people dying to a masked serial killer that is overweight but somehow can outrun a fitness chick, loads of poor decisions, some SCREAM-like attempts to inject humor into the situation from a third party guy watching the cams. It’s all been done before. But this is OK because it doesn’t pretend to be original, obviously, by not-so-subtle Michael Myers comparisons.

What is good is that the production values are very high, the acting is decent, the chicks are good looking and frequently naked, the blood, gore and deaths are all in your face (as opposed to off camera). Plus the modern age serial killer thing is done well (even if a blatant rip-off) with the hacking of servers, using IT knowledge to hijack cameras and door controls to trap people, even a slight nod to maybe technology isn’t all that it’s cracked up to be. If you are aching for a decent slasher, this one will fit the bill.

GIRL HOUSE is in limited theaters and on VOD everywhere on Feb. 13.