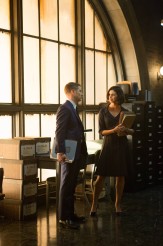 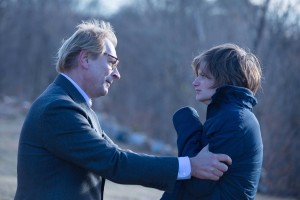 All things being said, I was a bit disappointed in the second half of the GOTHAM two-parter that introduced the origin of Scarecrow in the aptly named “The Scarecrow.”

Mostly, because it lacked the very person the episode it was supposed to be about. Obviously, maybe he’ll reappear in future episodes and this was all just a set-up to future things but for the most part all we got was an ending where Jonathan Crane (Charlie Tahan) sees visions of an evil scarecrow tormenting him because his father pumped him full of drugs including the fear secretions he extracted from people in the first part of the two-parter last week.

Instead, we got more boring plotlines with Bruce Wayne (David Mazouz) as he trekked out into the wilderness in order to find his path or some sh** and instead ends up breaking his ankle and has to climb his way out of a pit. Of course, Alfred (Sean Pertwee) was just waiting there for him as some sort of lesson he continues to teach him. All of it was just more of the same and until Bruce gets a better storyline is by far the weakest part of GOTHAM.

We also got the rebirth of Fish Mooney (Jada Pinkett Smith) after finding herself captive in some weird prison with a slew of other men and women being held there for yet unknown reasons. Fish takes the opportunity to take out the so called boss of the prison and insert herself into the top spot. This is an interesting development and Fish may have found an army that can rally behind her to get back to Gotham.

The Gordon (Ben McKenzie) storyline focused more on his budding relationship with the newly hired forensic scientist for the police in Dr. Thompkins (Morena Baccarin), than Crane and his crazy father. Of course, since the two happen to be dating it creates some tension for Gordon as he doesn’t really enjoy the public displays of affection she is so eagerly wanting to show.

The last few minutes of the show finally deliver the pay off with Crane and his son with Gordon and Bullock (Donal Logue) having to put him down and then the reveal that Jonathan Crane sees scary scarecrows and has gone off the deep end.

I did enjoy the whole first meeting between Penguin (Robin Lord Taylor) and Edward Nygma (Cory Michael Smith) as it was awkward and funny all at the same time. As obviously both have a long history in the Batman universe (working together occasionally) this was a fun moment.

But even the Penguin material this week was not that enjoyable either as it had more to do with why Maroni (David Zayas) wasn’t going to try to kill him and it took only a request from Falcone (John Doman) – along with a bit of bribery – to do so.

Hopefully next week will be better as this is the first Gotham episode I haven’t really enjoyed so far this season.