Home » How to get away with Murder interview 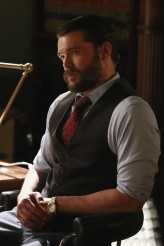 Charlie Weber on HOW TO GET AWAY WITH MURDER – exclusive interview 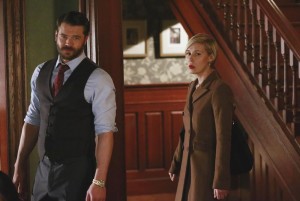 ABC’s HOW TO GET AWAY WITH MURDER, which has its first-season finale Thursday, February 26 at 10 PM, is the latest hit from executive producer Shonda Rhimes. Created by Peter Nowalk, MURDER focuses on Philadelphia law professor Annalise Keating, played by Viola Davis, who winds up giving her students much more hands-on experience in concealing crimes than anyone anticipated.

Charlie Weber plays Annalise’s investigator Frank Delfino, an expert in both digging up and hiding dirt. Weber, a Missouri native, got his big screen break in THE BROKEN HEARTS CLUB and shortly thereafter spent a season on BUFFY THE VAMPIRE SLAYER as Ben, the unlucky young man who shared a body with Clare Kramer’s hell god Glory. Other major roles have included stints on UNDEREMPLOYED, EVERWOOD and the recent incarnation of 90210. With HOW TO GET AWAY WITH MURDER renewed for a second season, Weber looks likely to continue playing detective – unless of course Frank meets with an untimely end in the season finale.

AX: When you landed HOW TO GET AWAY WITH MURDER, seeing that most of Shonda Rhimes’ Thursday night shows turn into hits right away, did you feel any sense of a job security?

CHARLIE WEBER: [laughs] It’s hard not to, but you never know how things are going to pan out. I remember, I watched the first episode with Tom Verica [who plays Sam Keating], Liza Wilde [who plays Bonnie Winterbottom] and Karla Souza [who plays Laurel Castillo]. They showed it to us, and right when it started, I was like, “Oh, my God, this is great. This is great.” We shot a great show, but you never know how it’s going to turn out, and it’s great, with Shonda behind it, Pete Nowalk’s a great, great writer, and Viola. So with all those ingredients, it’s an amazing show and I’m thrilled to be a part of it.

AX: Were you surprised or simply gratified when it became a huge hit?

AX: Did you do any prep for your character, researching the law or detective work?

WEBER: Well, more so than the legal stuff, which I did look into, I met more with private investigators for what it is that Frank does, but for me, Frank is the guy that’s from Philly. So I spent a lot of time in Philadelphia, getting down with the people and just hanging out and taking in the city. There’s a very unique energy there and the way that people are very aggressive and always moving forward, and I try to capture that and put that into Frank.

AX: HOW TO GET AWAY WITH MURDER shoots in Los Angeles, so do you have to get yourself into a Philadelphia mindset?

WEBER: Yeah. Luckily, we got to shoot the pilot in Philadelphia, and then when we got picked up, I went to Philadelphia for a few weeks and just lived there and worked on Frank, just doing character stuff, and then as soon as we break, I will spend more time in the beautiful City of Brotherly Love.

AX: Do you feel that Frank is genuinely not intimidated by Annalise, or that he actually is intimidated, but keeps up a good front?

WEBER: It’s a combination. I think they have a deep, deep, deep relationship, that they need each other, and so despite bickering, he recognizes her as his boss, but has a respect for that. When she snipes at him about this, that or the other, it rolls right off, because Frank knows that she needs him. And he loves her.

AX: How are you enjoying going toe to toe with Viola Davis?

WEBER: It’s a dream come true. That’s what you want as an actor. You want to work with the best, and now I get to on a daily basis.

AX: What is Frank’s attitude toward Annalise’s law students? Does he think it might be fun to get involved with one of them?

WEBER: Yeah, it’s fun from time to time, and I think the rest of them – Frank occasionally takes one seriously but usually doesn’t, because there’s a turnover. This isn’t the first time we’ve had the students in the office, far from it. And so there are people that he likes, people he doesn’t care about, people he doesn’t like. There’s a whole array of feelings for all the students.

AX: How involved are executive producer Shonda Rhimes and creator/show runner Peter Nowalk? Do they come in and say, “Do it a little more that way”?

WEBER: There is an unbelievable amount of trust in Shondaland. So when Shonda steps in, it trickles down to us, but she trusts Pete, and Pete trusts us, and she hires people that she thinks are capable, talented people.

AX: Do they tell the actors the plotlines in advance, or are you there with the audience going, “Who killed him?!”

WEBER: We’re right there with the audience. The only way we’re ahead of the audience is, we’re shooting ahead of what’s coming out, but every time we get a script, we don’t know what’s in it.

AX: You were on BUFFY THE VAMPIRE SLAYER …

WEBER: You’re right. I did the fifth season – “Ben is Glory, Glory is Ben.”

WEBER: That was amazing. I was really young. That was my first gig that really spanned time. To get to jump in the deep end with Joss Whedon was amazing.

AX: What would you most like people to know about HOW TO GET AWAY WITH MURDER right now?

WEBER: Just to stay tuned, because it’s going to get crazier.

This interview was conducted at ABC’s party at the Pasadena Langham-Huntington Hotel for the Television Critics Association.

Article Source:Assignment X
Article: Charlie Weber on HOW TO GET AWAY WITH MURDER – exclusive interview