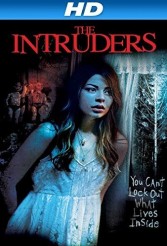 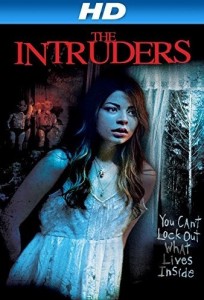 The new release THE INTRUDERS, not to be confused with either 2012’s feature INTRUDERS or 2014’s BBC series INTRUDERS, is a fairly generic PG-13 thriller. It’s not a worst-case scenario of the form, by any means, but it steadfastly fails to gain traction as it goes along.

College student Rose Halshford (Miranda Cosgrove), on a leave of absence from study, is moved by her architect father Jerry (Donal Logue) from California’s Bay Area to Chicago after the death of the family matriarch. Jerry has purchased an immense old house that he looks forward to restoring. Despite apparent good intentions toward his daughter, Jerry is a workaholic, and Rose, recovering from a breakdown, is left alone in this creepy old structure she detests. There are inexplicable noises, words carved in the wall and possibly malignant neighbors. Is Rose relapsing, is there some sort of sinister human behavior at work or are supernatural events occurring?

We rule out the first of these possibilities right away, mainly because we’re not given any flashbacks to support the fragility of Rose’s mental state. She’s distraught over the loss of her mother, but that’s natural enough. Beyond that, we get some catch-all dialogue, but nothing that indicates Rose disconnected from reality at any point.

Screenwriter Jason Juravic dutifully sets up clues (and red herrings) as to what’s actually happening here, though occasionally there are major stretches – when Rose finds an old newspaper headline online that is something to the effect of “Mother and Son Take in Runaway,” we wonder just how slow the news days can get in Chicago-area suburbs. Director Adam Massey doesn’t do much with jump scares, though when a certain type of menace rears up, it’s effectively nasty.

Cosgrove, previously of Nickelodeon’s iCARLY, shows off decent leading lady chops and Austin Butler is agreeable as a possible love interest. Michael Luckett does a very good job in a near-impossible role.

THE INTRUDERS isn’t particularly scary and it’s not at all psychologically acute. It could have been a movie of the week in any era when such things were commonplace, or a defanged episode of CRIMINAL MINDS. It is simply okay, no better or worse than its parameters suggest it ought to be.

THE INTRUDERS is available on DVD and Digital HD release. The DVD includes two making-of featurettes.