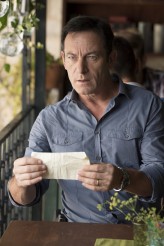 The scoop on DIG the new USA Series – interview 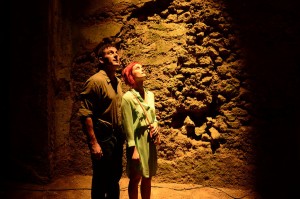 In USA’s 10-episode miniseries DIG, which premieres Thursday, March 5 at 10 PM, Jason Isaacs stars as Peter Connelly, an FBI agent stationed in Jerusalem, Israel. His investigation into a murder leads him to uncover a vast, long-lived conspiracy that threatens the world.

DIG is created by its executive producers Tim Kring (HEROES, TOUCH) and Gideon Raff (HOMELAND, TYRANT). Kring, who is also working on HEROES REBORN for USA’s sibling network NBC, participates in a show runner panel held by NBC Cable for the Television Critics Association. When it ends, he takes time to answer a few more questions.

One notable production aspect of DIG is that it was forced to move locations early on. Originally, it was going to be shot in its primary setting of Jerusalem. Unfortunately, the start of filming with conflict between Israel and the Gaza Strip that included rocket barrages, so production relocated to New Mexico.

AX: When did you realize that you needed to get out of Jerusalem?

TIM KRING: Basically, we were all living in this sort of surreal experience of being in Tel Aviv, which is a very cosmopolitan, lovely city, while this conflict was going on, and every day, usually once, maybe twice a day, you’d have to go into the stairwell of the building, or maybe the bomb shelter, and sit and wait out the air raid sirens. And so we had that sort of surreal experience of just sort of pushing forward as though it was all going to go away, and it just didn’t go away.

AX: How long did it take you to move?

KRING: As I was saying, we fortunately had had this built-in hiatus between the first and second and third episodes, and so the week of production, we finally sort of pulled the plug. And I think we were back in production about six weeks later. So it was about a six-week push, something like that.

AX: Did you get a later airdate as a result of that?

AX: Do you feel the move to New Mexico was successful?

KRING: It absolutely worked, and I defy people to tell the difference. The show takes place in Jerusalem, and so yeah, that’s the backdrop. We had banked some B-roll kind of stuff, second unit stuff, so I think it’s amazing how well it worked. Actually, some things worked out better. We had a storyline in the show – there are multiple storylines – one of the storylines takes place in the American Southwest. We were shooting that in Israel and finding it very difficult to double. Anything that has an Americana feel is so difficult to find – a gas station, a diner, a motel in New Mexico, just the smallest little things that we take for granted. Those kinds of things, we looked all over the country, we couldn’t find it. When we got to New Mexico, you couldn’t throw a rock without hitting any of those things. They were everywhere you turned. So in some ways, that part of that aspect of it actually became easier. We built our major sets, like the interior of the U.S. consulate, a hotel room, that kind of stuff, all in New Mexico. And so all in all, it kind of worked out. 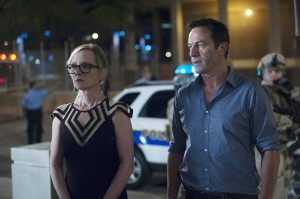 AX: Were you ever in Morocco?

KRING: No. I don’t think we even sent a location scout. We based our decision on some location footage that we had seen of another show. But anything in the Mediterranean for about a week was a discussion – Malta, Croatia, Sicily. We had all sorts of options.

AX: Can DIG be serialized past this season?

AX: Would Jason Isaacs remain with it if it becomes a franchise?

KRING: I certainly would think so, yeah. That’s sort of the idea, but in absolute all honesty, that’s not how we entered into it. We thought, “Well, if it works, then great.” Like a Bond film or a BOURNE IDENTITY, you come back and you do another one – you’ve got a franchise. But we are wholly committed to having this have an ending that’s completely satisfying at the end, and if it lives well and dies young, we’re okay with that.

AX: Speaking of endings, how did you feel about the way you wrapped up TOUCH?

KRING: Well, the truth is, we wrapped it up without knowing that we were wrapping it up. So it would not be how I would have wanted it.

AX: What did you want to do for the ending on TOUCH?

KRING: Well, it’s a long way down the road. We were a long way away from having an ending. And it was not the kind of show that begged – it was not a “get off the island” kind of show. So it did not have an ending like that in it. It was meant to have all kinds of stories that could be told for multiple years, and evolve as a show. It never promised an ending from the very beginning.

AX: Where are you in the process of HEROES REBORN?

KRING: Currently we’re going into production in a couple months, and so, yes. The train’s moving down the road.

AX: Do you know when it will begin airing?

AX: What would you most like people to know about DIG?

KRING: It is for people who love murder mysteries, for people who love conspiracies, for people who love thrillers – a paranoid nightmare kind of thriller – the idea that the world is closing in around your lead character and he can’t figure out which way is up and down. Those kinds of viewers are going to find this show exhilarating. I want them to know that it’s going to have a beginning, a middle and an end and that will all happen in the ten episodes, so if you log on at the beginning, we will bring this storyline to an ending, and the mystery will be solved.