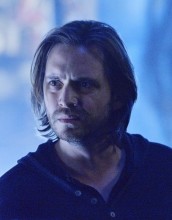 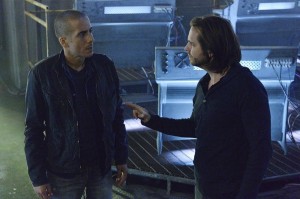 In Syfy’s 12 MONKEYS, Fridays at 9 PM, a plague wipes out humanity in 2015. Almost three decades later, unreliable time travel has been invented, and a small group of scientists send James Cole (Aaron Stanford) into the past to try to prevent the outbreak from happening. Cole teams up in the present with Dr. Cassandra Railly (Amanda Schull). This, at least initially, is of great alarm to Railly’s ex-fiancé Aaron Marker, played by Noah Bean.

Bean previously worked with 12 MONKEYS co-creators Travis Fickett and Terry Matalas (the TV version is based in part on an original work by Fickett and Matalas and in part on the 1995 feature film TWELVE MONKEYS, directed by Terry Gilliam from a screenplay by David Webb Peeples & Janet Peeples, which is itself based on the French film LA JETEE) on NIKITA, which was made in Toronto. The Massachusetts-born, Connecticut-raised actor has also had recurring roles in GANG RELATED, ONCE UPON A TIME, DAMAGES and DARK BLUE.

Bean sits down in a lounge area at the Beverly Hilton Hotel to discuss working with MONKEYS.

AX: It’s hard to tell at the start if Aaron is going be increasingly helpful or increasingly hindering. Did they tell you which direction he’s going?

NOAH BEAN: Yes. I don’t know exactly how we arrive places and what the journey entails, but I think it’s safe to say that my character will eventually be in on more of the situation, the reality of what’s happening. Because ultimately, his girlfriend comes up to him and says, “I got abducted by a time traveler. And I need to meet him in two years in this bar in Philadelphia.” I think probably most people would say, “Sweetie, we need to bring you somewhere [for psychiatric help], let’s figure this out.” And she ultimately sacrificed her career, her fiancé, everything, for this reality which is very hard to believe. They actually cut out some other scenes from the pilot that were more about my character trying to help her. And eventually, I think we are going to go back and see that time period, when Cassie, is waiting for Cole to come back, and how her life unravels. My character will be in on it. He’s chief of staff to a senator, so he has access, he’s kind of the inside man, he starts to figure out what, why and who is possibly creating this virus that we know is going to do some terrible things eventually.

AX: Why did they break up? Couldn’t Aaron have just said to Railly, “Well, does the time traveler need you to do anything else that’s odd during those two years you’re waiting for him, or can things be normal and then I’ll take you to Philadelphia in two years?”

BEAN: Right. You would think. Ultimately, she left him. We’ll see when we get there if he was not supporting her in the ways that she wanted to be supported, but she seems to have been fairly fanatical and then abandoned her career, abandoned everything, for this idea, this chance encounter that she’s now waiting to see if it’s going to be a reality. And she’s left Aaron. But I think I won’t be a stick in the mud for long.

AX: And you’re probably not going to turn into a villain?

BEAN: You know, I couldn’t tell you for sure. I think that the really fascinating thing about the show, too, is the way that we when we go back and change the past, the future is broken. And that is going to affect the way that people behave. If Cole goes back and does something and changes the course of history, that’s going to affect what my character does. Do I go into politics, do I become something else? It’s like that flap of the butterfly’s wings that change the course of history. I think that’s the really exciting thing about 12 MONKEYS, is that they can really go anywhere, and not only about events, but it can be about character, about people, about emotions, how you feel toward somebody. The way you behave may change throughout the course of this adventure.

AX: You were also on NIKITA. What was your character like on that show?

BEAN: I played Ryan Fletcher, who was a low-level CIA analyst, and got roped into Nikita’s [Maggie Q] world and then became a part of Nikita’s fight against this black ops organization called Division, and eventually rose through the ranks to then run Division once it was taken over by good, and then was a part of destroying it. And then ultimately sacrificed everything for Nikita’s vision of the way she wanted to save the world.

AX: And you worked with 12 MONKEYS co-creators Terry Matalas and Travis Fickett on NIKITA …

BEAN: Terry and Travis were a writing team on NIKITA, and that’s how I first got hold of a script [for 12 MONKEYS]. They were up there producing one of their episodes in our fourth season and I saw it hanging out of their bag, and I said, “What’s that?” And then they said, “Well, why don’t you take it and give it a read?” I flipped out about it, and that’s when the conversation started and then eventually we are now sitting here, talking to you.

AX: So did they bring you in to Syfy and said, “We think he’d make a good Aaron Marker?”

BEAN: Yeah. I owe them a lot. They really championed me and they were totally supportive and I think for Aaron [Stanford], too, everything worked out. I’m thrilled. You don’t always get the chance to work with people that you know and like in this business, because you’re constantly doing all these different things, so to be able to come back and do something with Terry and Travis, and Aaron as well is fantastic. And Amanda, actually, she did a guest spot on NIKITA one season, so it’s all in the family. And I think that’s good. It strengthens your trust. You need to be able to be vocal and be collaborative to make something really great.

AX: Have you had to learn how to do anything to play Aaron?

BEAN: I did some research on politics – I read GAME CHANGE, a few books that are about the behind-the-scenes of politics and presidential elections and stuff like that, just to get in that world and remind myself how conniving and backstabbing and crazy that world can be. It’s not just people standing around in suits. And actually re-watched HOUSE OF CARDS. Not that this show is that, but my character has an existence in that world

AX: You’re relocating to Toronto for the series, but how was shooting the 12 MONKEYS pilot?

BEAN: It was a blast, such a good time to shoot and it was a tough shoot. We shot in Detroit in dead of winter and it was absolutely freezing, but cinematically, it’s a wonderful city to shoot and it worked really well for what we needed, I think. And we’ve got a great cast. Jeff Reiner, our director, is fantastic. So it’s been a joy.

AX: Are you a sci-fi buff as a reader or a viewer, or is this just where you got the job?

BEAN: I love this movie. I was a big fan. I love Terry Gilliam – TIME BANDITS, THE FISHER KING, I just love his world, so that was the big appeal at first. But I do love GAME OF THRONES. As I kid, I would go down to the comic book store and buy that. I kind of left that along the way somewhere, but I love all the Marvel movies that are coming out now. It’s really fun, actually – Chuck Roven, Richard Suckle, our executive producers, they’re producing BATMAN VS. SUPERMAN, so I was just asking Richard about that and stuff like that. So I like the genre. I’m shocked when people don’t like sci-fi, because it’s just fun.

AX: Besides onscreen work, you also do theatre – you played Michael Cassio in the 2014 San Diego Old Globe summer production of Shakespeare’s OTHELLO with Blair Underwood and Richard Thomas. Can you contrast doing classical theatre with doing contemporary/futuristic television?

BEAN: Well, the thing about Shakespeare – Shakespeare is visceral, it is immediate, it is blood and guts and drama. He was not only writing the greatest poetry that may ever have been written, he’s writing great entertainment. And I think sci-fi is all about that. It’s about great entertainment. The stakes are huge. It is life and death, it is fast-paced, it’s sudden turns. And in Shakespeare, it’s all about that. It’s like opera, it’s big. So it’s been great. It’s been great to do that, and I really feel so happy and lucky to be able to go from that straight into 12 MONKEYS. It’s rejuvenating to go back and do a play, and especially do Shakespeare and bring that kind of immediacy hopefully up to the set of 12 MONKEYS.

AX: Is there anything else you’d like to say about 12 MONKEYS right now?

BEAN: Well, I just think the thing that’s so fascinating is this idea of, just because you can change the past doesn’t mean you should. And I’ve been sitting around with friends, asking that question, “If you could go back and do one thing, what would you do?” And of course, you’d say, “I’d go buy stock in Microsoft,” or “I’d want to see Babe Ruth hit a home run.” But when it comes to world events, how would you change the world? The ripple effect of those things, when you really start to contemplate it, it gets a little tricky. Sure, you want to go back and kill Hitler, which of course would be a good thing, but possibly you and I would not be here. It would change the course of history. So it’s just a really interesting, fun thing to talk about. And the show is going to explore that and hopefully fans will have fun thinking about it.

This interview was conducted at Syfy’s portion of the Television Critics Association press tour.