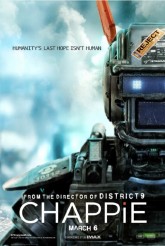 Sweet, dark and a bit retro

Although CHAPPIE is clearly a product of present-day filmmaking – the motion capture is state of the art – it harks back to the kinds of stories that filmmakers were telling in the early ‘80s, like E.T. (minus the alien element), ROBOCOP and TERMINATOR. Director Neill Blomkamp and his co-screenwriter Terri Tatchell have a lot of love for the first sentient, self-aware robot they depict here, but they also show a sense of darkness, anarchy and a taste for the old ultra-violence.

A flash-forward testimonial at the start of the film indicates that the populace is well-pleased with the title character of CHAPPIE, played via motion capture and voice by Sharlto Copley. A year or so earlier, this wasn’t the case – although, indeed, nobody was expecting robots that could think for themselves. No one, that is, except robotics engineer Deon Wilson (Dev Patel), who is obsessed with creating not just artificial intelligence, but something that is capable of having genuine opinions and self-awareness.

Since Deon works at a weapons manufacturing company in Johannesburg, South Africa, his boss (Sigourney Weaver) and colleagues are far more interested in the robot police officers he’s created, which are controlled by humans in helmets who can manipulate the non-sentient metal bodies via thought. It’s certainly good for the Johannesburg police force, though a lot of regular folks are terrified and the crooks are really irked.

When Deon steals a damaged robot from his workplace, he’s blissfully unaware of the machinations of three desperate criminals (Ninja, Yo-Landi Visser, Jose Pablo Cantillo), to say nothing of the building resentment of an angry fellow robot developer (Hugh Jackman). All Deon wants is to bring up his “baby” properly, but there are unexpected developments.

CHAPPIE is the kind of grab bag of ideas that are more the province of indie films than major studio sci-fi releases, with accelerated mental growth, overkill by police, religious xenophobia, redemption, an upbringing that mixes “street” necessities with moral underpinnings, hard science-fiction and bloody action.

As portrayed by Copley, the (starting off as) human hero of director Blomkamp’s debut feature DISTRICT 9, Chappie is an absolutely endearing metal adolescent who only wants to make friends. There’s no way to be sure, but it seems that CHAPPIE’s R rating has (or should have) more to do with a few sequences where Chappie is tortured than the human bloodshed and/or the salty language. Speaking of language, dialogue that is delivered in strong South African accents is subtitled for viewers, even though everyone is speaking English.

Patel is suitably bright, driven and geeky and Jackman puts a lot of glee into his overgrown kid of a bad guy. Ninja and Visser give striking performances (the pair are rap/rave performers, married to one another in real life), as does Cantillo as their associate.

CHAPPIE’s overall aesthetic is moderate urban blight, heightened but not unduly futuristic – this is, after all, supposed to be only a year from now. Blomkamp keeps things moving but has plenty of time for grace notes. Most importantly, he makes us care about all of the characters, so that by the end, we’re genuinely invested it how it all turns out.