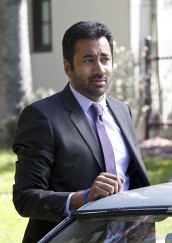 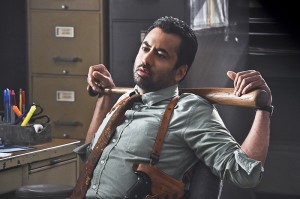 Battle Creek, Michigan, is a real town that, until now, has been most famous for being home to many popular brands of breakfast cereal. It is now also the landscape for CBS’ new series BATTLE CREEK, Sundays at 10 PM. Originated by BREAKING BAD’s creator Vince Gilligan and co-developed with HOUSE creator David Shore, who is now the show runner (Gilligan is devoting his energies full-time to BETTER CALL SAUL), BATTLE CREEK explores what happens when cynical police detective Russ Agnew (Dean Winters) must work with optimistic FBI agent Milton Chamberlain (Josh Duhamel).

Kal Penn plays Russ’ regular partner, Detective Fontanelle “Font” White. Penn is known to comedy feature film audiences for the HAROLD & KUMAR franchise. He’s also done a lot of independent dramas. He worked with BATTLE CREEK’s Shore for several years on HOUSE, which Penn left in order work for two years with the White House’s Department of Public Engagement. He had a recurring role on HOW I MET YOUR MOTHER for CBS, and last season was one of the stars of the network’s short-lived half-hour comedy WE ARE MEN.

AX: Were you cast before or after David Shore was brought onto the show?

AX: Was your shared background on HOUSE a factor?

PENN: You know, I’d heard about the project and I’d read the script, because of course pilot season, agents try to send you as many scripts as possible and so I read the script, and I just thought, “Okay, I need to email David Shore immediately. I want to be part of this show.” And I alluded to this earlier – it was kind of the concept of, cops always need to play by the rules. That’s the nature of their work. But then, knowing David Shore and Vince Gilligan and reading the pilot, you’ve got that blurry line of, are these cops folks who, by virtue of the types of things they’re working on and the tension between the two leads, the FBI guy and the cop, going to have to get into a situation where you question playing by the rules? Being a fan of both BREAKING BAD and of course HOUSE, I thought this would be an interesting thing to tackle. So I emailed David and we talked about it and I knew he had a whole bunch of other moving pieces in terms of the casting and the production and all that, so I’m really glad it worked out.

AX: Did he make you sign an agreement where you promised you wouldn’t leave for the White House?

PENN: [laughs] We joked about it. I said in one of my emails to him, “If this works out, I promise I won’t make you [write the character out] to go work in government.” I loved my two years there. I was actually only going to do a year at first, and stayed for a second year because I enjoyed it so much. But no, I don’t have any plans to go back.

AX: Are you doing anything else for the White House on a one-off basis?

PENN: Yeah, I sit on the President’s Committee on the Arts and Humanities right now, which is not a full-time thing. We work with arts in education in thirty-five schools around the country. So I help out with that, I help out with a couple other things on the side, but for the most part, I’m here.

AX: In the pilot, Font seems like he’s neither overjoyed nor upset by Milt’s arrival. In fact, Font seems to be the most even-keeled person at the precinct. Are you worried about the possibility of winding up as the relative straight man on the show?

PENN: If I did, I think it would be a welcome change from some of the other stuff I’ve had to work on. So it’s an interesting question in my mind. I think what I liked about Font was, everyone else is so enamored by Milt’s arrival. And I think Font isn’t, because he’s been partners with Russ for so long that he’s just seeing how all the parts are going to play out, and he seems to be the kind of cop, at least in the first couple episodes, who likes to play by the rules. But David Shore and Vince Gilligan, as we know from their past writing, they don’t necessarily have all the characters play by the rules, so I’m really curious to see whether I’m going to be the guy who suddenly changes, or if, as you said, he is more of a straight man. It doesn’t worry me – I’m actually interested to see what happens when the scripts come out.

AX: You’ve said you did some ride-alongs with actual police officers for research: How was that?

AX: Apparently, it is the right of any American citizen to do a ride-along

PENN: Yes. But all the journalists I’ve talked to have only done it if they were researching something. Same with actors. It was incredible to see everything from the paperwork to actually going out and watching drug busts and watching gang interventions, traffic violations, everything from really small, somebody who didn’t put a turn signal on, to some of the more intricate gang intervention things they had going on. I didn’t realize that there would be that type of drug and gang activity in Battle Creek, but it’s really fascinating. I didn’t grow up in a place with a lot of crack, as far as I know, so it was really interesting to see, and on a more serious note, I wanted to bring, and I think we all do, a certain amount of realism to a show that has a lot of levity as well. So seeing something like that, having a chance to spend time with officers of the real Battle Creek Police Department, gives you a little more understanding of some nuances that maybe you don’t get to have exist in a TV version, but they’re still in the back of your mind and you hope to do justice to them.

AX: What made the biggest impression on you?

PENN: Honestly, the more fascinating stuff was having a chance to spend a few hours in the office, in the precinct with some of the officers. Because you see the banter behind the scenes, you see what they do on their downtime. There is a lot of paperwork any time you make an arrest or try to get a warrant, and having an understanding of what that is, those are not the more interesting things that end up showing up on TV – you don’t watch LAW & ORDER: SVU and get interested by the warrant process, it’s always busts and things like that. But I feel like building a character, you have to have that understanding, and it’s really useful to have that understanding.

AX: Is there anything else you’d like to say about BATTLE CREEK right now?

This interview was conducted at CBS’ day for the Television Critics Association at the Beverly Hilton Hotel.