gotham review the anvil or the hammer 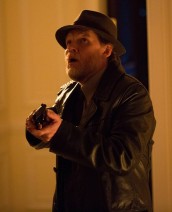 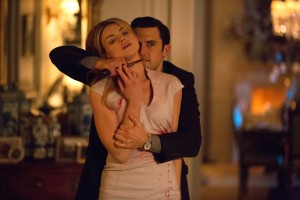 The penultimate episode of Season 1 for GOTHAM had to do yet again with The Ogre. The third episode in a row where Gordon (Ben McKenzie) and Bullock (Donal Logue) try to track down the serial killer that targets the loved ones of cops that try to bring him to justice.

Needless to say, three episodes is a bit much and The Ogre was getting a bit long in the tooth but I suppose Gordon and Bullock needed a plotline to kill time between the last few episodes and the season finale when everything comes to a head (or at least so it appears). “The Anvil or The Hammer” picked up where the previous episode left off with The Ogre (guest star Milo Ventimiglia) taking Barbara Keen (Erin Richards) hostage in an attempt to get to Gordon. Of course, Gordon is interested in getting her back but not as interested in keeping Dr. Thompkins (Morena Baccarin) safe since that’s where his heart is at now.

Luckily, the episode had much more than just this main plotline going for it because what was happening in the subplots was much more interesting than Bullock and Gordon hunting the Ogre – and it ended as you might expect with the two getting their man after Barbara is forced to watch her parents slain in front of her. Probably won’t be the last we see of her and her troubles but at least it is over for now.

Meanwhile, Cobblepot (Robin Lord Taylor) enacts a plan to kill Maroni (David Zayas) by setting up a number of weapons in a restaurant he frequents. But when both guns misfire, he kills both of the guys sent to kill him and declares a war between himself and Falcone (John Dorman). Now this isn’t much of a surprise given how confrontational the two have been throughout the first season so an all-out war between the two was pretty much inevitable. But this definitely sets the stage for an interesting finale especially with the return of Fish Mooney (Jada Pinkett Smith) after her issues on the island where people are experimented on.

Of course, not all of the subplots can be good. Continuing what has been a Season 1 theme, Bruce Wayne (David Mazouz) and Albert (Sean Pertwee) continue to get muddled in a lame plotline involving Bruce trying to determine what’s going on with Wayne Enterprises and why the corporation is doing dastardly things. When he confronts one of the main guys at the corporation he tells young Bruce that his father knew all of the bad things happening but still proceeded to go along with things. I understand they are setting the stage for something bigger and it is an origin story but at least we could give the little rugrat something more interesting to do during his formative years. The pain that made him the Batman hasn’t really been shown at all unlike how they have done a pretty good job with Selina Kyle (Camren Bicondova) in establishing she isn’t the nicest or fairest person.

With the season finale coming next week, hopefully they give us a good send off and sum up all the building plotlines that have been happening during Season 1.