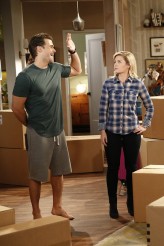 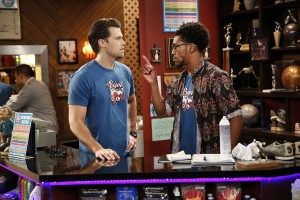 In NBC’s ONE BIG HAPPY, which has its first-season finale Tuesday, April 28, 2015, Nick Zano stars as Luke. Luke is a straight man who has made a plan with his lesbian best friend/roommate Lizzy, played by Elisha Cuthbert, to have a baby together. However, just as Lizzy gets pregnant, Nick falls head over heels with Prudence, played by Kelly Brook, who can only stay in the U.S. if Nick marries her. Hence the show’s title.

Zano, originally from New Jersey, has done a lot of television comedy before, along with television drama and films, including BEVERLY HILLS CHIHUAHUA, JOYRIDE 2: DEAD AHEAD and THE FINAL DESTINATION. He previously worked with ONE BIG HAPPY creator/show runner Liz Feldman on TWO BROKE GIRLS and with cast mate Cuthberg in HAPPY ENDINGS.

AX: So you met Liz Feldman while you were both working on TWO BROKE GIRLS …

NICK ZANO: She was a writer and producer over there, and we got along. There would be moments when we would be shooting the show and we’d lock eyes and started talking and we had an instant friendship. And I respect her tremendously as a writer.

AX: Was she instrumental in you getting the lead in ONE BIG HAPPY?

ZANO: She called, I became available and I had a meeting. I literally had followed through her entire development process, being friends, and I knew the show, I knew about the whole thing. So when it happened, she was like, “Do you want to do this?” And I was like, “Yeah, let’s do this.” Because I traveled a lot on a lot of different shows, and I picked things up along the way that I love, and people that I love – case in point Liz, case in point Elisha. Those are two people from two different shows that I realized, “I want to work with you guys and you guys are very special,” and I feel very fortunate. In that personal journey that I was on, I came across those two that I have a beautiful working relationship with.

HAPPY ENDINGS was a very highly comedic cast. It was an amazing show. And I learned a lot, but I learned something about Elisha on a personal level during that time, which is that Elisha’s hilarious. So when her name came up, I genuinely recruited her. She was on vacation. I called her on the phone. I was like, “Elisha, we can do this, we can do this together.” I sold her, as if it was a sports program. I wanted her there so bad and I knew everything she can do that nobody knew she could do.

AX: Did you have input into Luke’s character during the development process?

AX: Does Luke have any idea about what he wants out of parenthood? For instance, is he envisioning teaching the kid how to throw a football very badly, or …?

ZANO: In their world, [Lizzy]gets pregnant and [Luke and Prudence] get married. And we’re playing it in real time, so it’s an honest six weeks. Six weeks of finding out that information can really rock your world. I think it’s more a matter of a juggling thing he’s doing with [both women]. Like, “I don’t want to get her upset” and “I’m trying to keep my love alive.” It’s a show at its core about relationships and it’s a relationship between a best friend and the love of his life and it’s a matter of marrying those two worlds together.

AX: Ellen DeGeneres is the executive producer on ONE BIG HAPPY. What’s it like working with her?

ZANO: It is literally everything you think it is. She’s fun, but she has incredible ideas. She comes from a comedic brain that is like a black belt in jujitsu. She sees things – there are times when I feel like I’m playing checkers and she’s playing chess, and I’m like, “Wow, I didn’t see that, and you’re right.” She shows me the Matrix of comedy.

AX: How hands-on is she with the show?

ZANO: Here’s the thing Ellen’s doing on our show. She’ll warm up the audience. The audience is two hundred people. It’s like MTV UNPLUGGED, but comedy. Everybody who’s in the crowd is like, “Oh, this is just for us.” Ellen gets everyone fired up, she does a ten-minute set, and we sit back there, and we’re like, “Oh, God, Ellen’s crushing it right now. And we’ve got to do the show, we’ve got to follow Ellen after she just crushed to this crowd.” So we’re like, “All right, let’s do it.” But there are times when we wait backstage, and she’s doing an opening bit, and we’re laughing, so it kind of loosens us up. It’s very cool. It’s special. The people who are there who watch, they feel how special it is. We are in this all together, collectively, and it’s a different feeling when everybody is all in.

AX: There is some nudity on the show. What is Kelly Brook as Prudence actually wearing on set when she is supposed to not be wearing clothing?

ZANO: That is up to Ms. Brook to share with you. That is her inside secret. One thing I learned is, don’t comment on naked ladies.

AX: Is she the only person who’s required to be undressed, or are you undressed at some point?

ZANO: There is some nudity from me.

AX: What are you wearing?

ZANO: I wear the same thing that Kelly wears. From about neck to knee, I’m pixilated. It costs a lot, but …

AX: Do you have favorites among your recent work on other shows?

ZANO: I don’t know. I’ve learned a lot from TWO BROKE GIRLS, from [that series’ creator] Michael Patrick King, [who] has been a fantastic mentor and friend. And HAPPY ENDINGS – I never went to UCB [Upright Citizens Brigade comedy troupe], but every single cast member is a very experienced UCB member and you either hang or you look like you don’t hang.

AX: Was it helpful starting up with ONE BIG HAPPY that you had already worked with both Liz Feldman and Elisha Cuthbert?

ZANO: Yes. I mean, that plays into it. I’ve been on sort of a tour of shows in the past year and a half – TWO BROKE GIRLS and HAPPY ENDINGS, COUGAR TOWN, and picked things up along the way that I really enjoyed, and people up along the way, and Elisha’s one of those people that I met and I spent time with and she’s just incredible. So when she came in, I’m like, “Great, we’re going to do this together.” I had dinner with her husband and her, so we have a real-life friendship. When Kelly came in to play, the two of us were like, “Yeah, this totally fits. This is the three of us and we’re about to do this for real.” We had several reads together and it was pretty much the easiest sale of all time. That was a no-brainer for anybody who saw it in the room. She came in and just crushed.

After that experience [of working on many different shows within a short time frame], all I wanted was to set up a home base. And the fact that the home base actually started with a friend and then another friend and then a wonderful actress, it felt immediately like, “Wow. This is sort of our thing.” And it’s something we take a lot of pride in. We enjoy it. I enjoy their company. We have nights where we just study together, the three of us, and we go over stuff, we read. We work hard and it pays off.

AX: How much does the live audience for ONE BIG HAPPY influence your timing and what you’re doing?

ZANO: There are times where a joke will hit that didn’t hit during rehearsal, and the audience loses it and you’ve got to wait it out. So if we’re in a heated moment, I’m staring at you, trying to keep this energy and wait for a laugh to die. So it’s sort of this crazy, weird way of acting, but after you do it, you could do pretty much anything.

AX: While you’re in the wait period, has anybody ever done something that created a new laugh?

ZANO: Oh, God, yeah. So many. I wish you guys could see our gag reel. We did six episodes and we have an eleven-minute gag reel. It’s pretty epic. Request it.

This interview was conducted during NBC’s press day for the Television Critics Association at Pasadena’s Langham-Huntington Hotel.