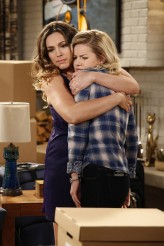 The comedy's creator talks the real-life inspiration for the show 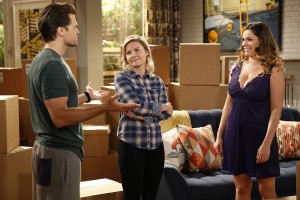 In NBC’s half-hour comedy ONE BIG HAPPY, Tuesdays at 9:30 PM, Elisha Cuthbert and Nick Zano star, respectively, as lifelong best friends Lizzy and Luke, who have decided to have a baby together. As Lizzy is a lesbian and Luke is heterosexual, the baby is conceived via Luke’s sperm donation. However, at about the same moment Lizzy discovers she’s pregnant, Luke falls head over heels for Prudence (Kelly Brook), an Englishwoman who reciprocates his ardor, but is about to be deported. One quick marriage to produce a green card later, and Lizzy, Luke and Prudence – plus the impending baby – are ONE BIG HAPPY.

Liz Feldman created the series, which is executive-produced by Ellen De Generes. Feldman talks about the inspiration for her comedy and the characters in it.

AX: You’ve said that in your real life, you were planning to have a baby with a male friend?

LIZ FELDMAN: I really was, yeah. We had planned from a very early age to have a baby together, but when he did meet the love of his life, and it really was love at first sight, plans started to change, and we both understood that things were going to be a little bit different. I knew as soon as he met her that the course of my life was going to be very different than I had been planning. And that’s really the basis for the show.

AX: You had already worked with Ellen De Generes?

AX: Was she urging you to try to come up with a sitcom?

FELDMAN: No, not at all. I mean, we had actually not worked together for a few years at that point, and I actually was writing on TWO BROKE GIRLS at the time, and I really wanted to tell this particular story, and I was given a development deal by Warner Brothers, and I thought this would be a good time for this story, and I knew if I paired with a big producer, I might actually have a shot at getting it on the air, and so I went back to Ellen, and that’s how we paired up.

AX: How did you come up with the character of Prudence?

FELDMAN: Honestly, I am very enamored of English people. I knew I wanted her to be from another country, because we needed a green card element to it, and I really, truly have such an affinity for British people – one of my best friends is from the north of England – and it was really fun to write an English character, because I knew that person could be so diametrically different than Lizzy, and that’s why I did it.

FELDMAN: [Luke] is basically an amalgam of a bunch of different straight guy friends that I have. He certainly is inspired by my best friend, but I’ve got a long history of being very close friends with guys. I know it’s weird to say this as a lesbian, but I love men. And I’ve always counted very many close male friends among my very best friends, and so this is almost like a love letter to all my straight guy friends.

FELDMAN: You know what’s funny? When I first asked Elisha, I thought, we’re probably very different people. And what we came to realize is that we are incredibly similar.

FELDMAN: And petite, yeah. So that works. But the character is Type A, and that resonates with me. The character is also very dorky and very sensitive and really just wants to have a family so badly. That rings true for me, too. So there definitely are a lot of aspects of the character that are close to home for me, but once I cast Elisha, we really were able to fully flesh it out and make it a real person, based on who I am, based on who she is and based on who we became when we had a character together.

AX: Are you going to continue with that love at first sight vibe between Luke and Prudence?

FELDMAN: Well, what’s interesting is, love at first sight eventually becomes “love because I actually know you.” I’m definitely going to have them continue to get to know each other over the course of our first season, and God willing, if we get a second season, you start to learn things about each other that you would have never known and I think we’re going to see that love at first sight makes room for a lot of surprises.

AX: How long is it going to take Prudence to realize or care that she kind of drives Lizzy crazy?

FELDMAN: Well, I think that you’re going to see a major transformation in Episode Six, and I’m really excited about that.

AX: How many episodes is your first season?

FELDMAN: Six. So we really went for quite a big season finale. Episode Six is quite a major story and I think it will answer a lot of your questions.

AX: What would you most like people to know about ONE BIG HAPPY right now?

FELDMAN: What I’d most like people to know is that my agenda is to make people laugh, and I feel like we’ve accomplished something really funny with this show, so beyond any politics or sexual identity questions, it’s a funny show, and I hope people enjoy it.