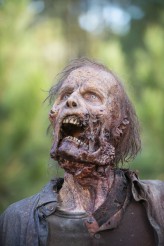 An entertaining finale that firm establishes Rick and company in Alexandria 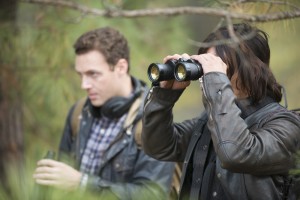 Warning: Massive spoilers ahead, read at your own risk.

Multiple pathways and plotlines were presented in “Conquer” including some familiar faces and old grudges coming to a head all seemingly coming together by the end of the episode.

We’ll start with the Rick Grimes (Andrew Lincoln) arc since it is at the heart of what we will more than likely be seeing for the foreseeable future on THE WALKING DEAD. After Rick’s meltdown with Pete (Corey Brill) and subsequent knock down, window breaking fight in which Rick went on a tirade about the people Alexandria not being prepared or worthy of the comfortable surroundings they find themselves in. The populace of Alexandria are not really hot on having Rick and crew in their community at this point. Much of the episode involves conjecture about what the group will do if they decide to oust Rick and whether or not they will either rise up and conquer Alexandria or leave or just let Rick go alone.

Of course, this is about a loss of power from Deanna (Tovah Feldshuh) and the loss of what her community has before Rick and crew arrived. But it becomes apparent during the community meeting after many of the crew give detailed examples of how Rick has seen it all and lived through it all and how the community hasn’t had to do anything really, that maybe Rick is right. That there are enemies beyond the walls and from within. That becomes overly apparent when Pete attacks the group and slashes Reg’s (Steve Coulter) throat. Deanna tells Rick to do it and we see him firing a bullet into someone (Was it Pete? Was it Reg? We’ll assume it was Pete.).

Just as this happens Morgan (Lennie James) strolls in looking a hell of a lot better than the last time we saw him. Wait Morgan is there? Yes and he’s a bad ass. We open the episode seeing Morgan take on two of the people that have been going around marking zombies with “W” and setting various traps for people looking for food or supplies. We next see him saving Daryl (Norman Reedus) and Aaron (Ross Marquand) from one of these traps at a canned food facility. Daryl and Aaron had been tracking not only the wrath of these W people but another survivor that they hoped to bring back to Alexandria. Unfortunately, that poor soul was already captured by the W clan and Morgan comes in to save the duo just in time, the other guy was not so lucky. When we last saw Morgan he was batsh** crazy, trapping people and killing anyone that came into his town after the loss of his son. Apparently, he got the message Rick was trying to give him and decided to catch up to him after all this time. Morgan has always been a good character on this show and his badassry is something that will be well received in the next season. As long as they let him stick around this time.

Meanwhile, Glenn (Steven Yeun) and Nicholas (Michael Traynor) have their battle that has been brewing for a few episodes outside the walls of Alexandria with a back and forth going on before Glenn finally gets the upper hand and drags Nicholas back to the community another example of enemies within.

As finales on THE WALKING DEAD go, this one ended with more of an optimistic view of things (well, except for a death at the end) with Father Gabriel (Seth Gilliam) trying to find forgiveness, Tara (Alanna Masterson) waking up and the group becoming more entangled with those in Alexandria. But we are only scratching the surface of things in Alexandria. There is much more to come if they follow the path of the comic book and things will get better and much worse as time goes on. Hopefully, they will dispense with some of the more snooze worthy episodes from Season 5 and follow more of an enjoyable path such as this episode.