The walking Dead review Them 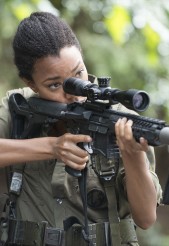 An episode of reflection, which means nothing really happens 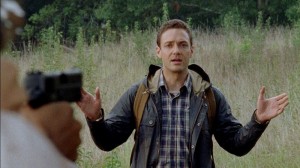 Since showrunner Scott M. Gimple took over the ship of THE WALKING DEAD he has loved giving us episodes such as “Them.”

An episode where really, let’s be honest, nothing happens. Instead it is a bridge to future episodes where something more interesting will take place to more along our weary survivors to hopefully better (or at least stable) times. Of course, this is a great time to add in some reflection about the things that have happened in previous episodes and since two major character deaths have happened back-to-back (Tyreese and Beth), there’s a sh**load of reflection in “Them.”

The episode focused on the continued fight among the survivors for the basic needs in life – food, water, shelter and safety from the constant threat of zombies. The problem is they are in the middle in the summer and water is nowhere to be found and food is just as hard to find. So much so, they resort to eating a pack of dogs that come upon them rather aggressively – a lone shot of a collar with a name attached shows these dogs belonged to someone at some point.

We center on three characters most hit by the recent events – Daryl (Norman Reedus), Maggie (Laurent Cohan) and Sasha (Sonequa Martin-Green). Daryl and Maggie mourn for Beth in very similar ways. Maggie contemplates just ending it all because where it the hope? What does he have to keep fighting for? Daryl in his own way does the same thing by cutting himself off from the rest of the group and also wondering what’s left for him in the world. Sasha is the exact opposite and wants to kill everything in sight (for example the dogs) even to the point of risking the group by abruptly nixing their plan to kill a small horde of zombies.

Rick (Andrew Lincoln) tries his best to keep the whole gang together by telling a story about how his grandfather used to believe he was already dead in order to keep going and how they were “The Walking Dead” but Daryl discounts this by saying “we aren’t them” although sign he has forgone all hope entirely.

Along the way they receive a gift from someone following them. It’s bottles of water and they immediately are suspicious (by this point you’d have to be). But before they can make heads or tails of it a huge storm hits and they must take refuge in a barn only to get attacked by another horde of zombies and band together to hold the bar door together.

In the morning, Maggie and Sasha venture out to see the storm has devastated everything around them (including the zombies) but left the barn intact. As they sit enjoying the sunrise, Aaron (Ross Marquand) approaches and says he’s friendly and wants to talk to Rick.

Of course, anyone who has read the comics knows this exact spot where this plotline happens and it will be interesting to see where the TV universe takes it.

All in all, this is two mediocre episodes back-to-back but hopefully things will get more interesting starting next week.