Home » ABOUT A BOY interview 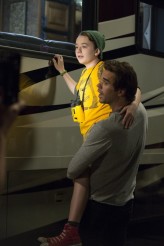 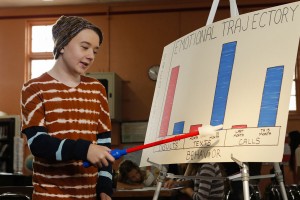 In NBC’s ABOUT A BOY, Tuesdays at 9:30 PM, Benjamin Stockham plays Marcus, the boy in question. Marcus is a tween whose life is forever changed when carefree Will (David Walton) moves in next door to Marcus and his overly protective single Mom Fiona (Minnie Driver) in San Francisco. The series, now in its second season, is adapted by show runner Jason Katims from Nick Hornsby’s novel (which was also made into a 2002 film starring Hugh Grant and Nicholas Hoult).

Stockham, now age 14, has been acting since he was five years old, with plenty of film (QUARANTINE, SIMON SAYS) and television series regular (1600 PENN, SONS OF TUCSON) credits already on his resume.

At the end of Season 1, Walton’s Will moved cross-country to be with his new girlfriend, though he’s since returned to San Francisco and Marcus’ life. At a party thrown by NBC for the Television Critics Association, Stockham talks about what’s new with his BOY.

AX: Were you confident that ABOUT A BOY was coming back for a second season, or did you have concerns and then went, “Yay!” when it was picked up?

BENJAMIN STOCKHAM: Yes, I was confident. But it’s always nice to hear that, “Yay, you’re coming back.” Because it’s like, I know it’s going to get it, but why am I still so nervous?

AX: Is this your first TV show that’s gone to a second season?

AX: Have the producers talked to you about what’s going to happen if your voice changes?

STOCKHAM: It already sort of has. Not like a lot, but it’s a little bit deeper. And no, we have not talked about that, but I’m assuming that it’s just going to be “Marcus ages.” It’s not going to be that big of a deal.

AX: So the show is probably going to progress in more or less real time?

AX: Can you talk about changes for Marcus in Season 2? Is he pissed off at Will for having left?

STOCKHAM: I don’t know about “pissed off.” Maybe a little bit upset and disappointed, but he can never get super-mad at Will. And even if he could, I don’t think he’d be pissed off for going off with somebody he loved.

AX: Do the producers let you make suggestions?

AX: Did you learn anything last year that you felt was useful going forward?

STOCKHAM: Well, to me, timing is one. You have to say the joke at the right moment or it just won’t be funny. And there’s also character. You really have to get inside the mind of your character – what would they say, what would they think? And you can put your own little spin on the lines – don’t completely rewrite it, but sort of inject your character into the words. 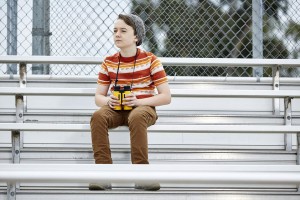 STOCKHAM: This is going to be a cliché – I really liked in the pilot episode when Marcus is singing [at a school talent show] and Will comes to save him. It’s really sweet.

AX: Do you like to sing apart from that, or was that a one-off?

STOCKHAM: Not well, but yeah, I do sing. Not professionally or anything. Kind of really off-key in the shower.

STOCKHAM: In 2015, a DreamWorks Animation [feature film] called BOO will be coming out, so look out for that. It’s animation.

AX: So you’re voicing that?

AX: And is there anything else you’d like to say about ABOUT A BOY right now?

STOCKHAM: It’s got a second season, so woohoo!