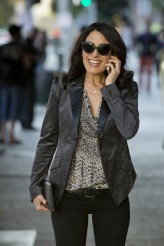 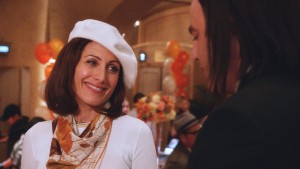 Marti Noxon began 2015 as a very busy executive producer, supervising post-production on two different TV series on two different networks. UN-REAL, which Noxon created with Sarah Gertrude Shapiro, is a satiric scripted look at a BACHELOR-style reality show, which will air on Lifetime later this year. Noxon also created GIRLFRIENDS’ GUIDE TO DIVORCE, currently airing on Bravo Tuesdays at 10 PM and renewed for a second season, which stars Lisa Edelstein as a romance advice expert navigating the end of her own marriage.

Noxon’s previous credits include executive-producing the last two seasons of BUFFY THE VAMPIRE SLAYER and more recently writing and producing on MAD MEN and GLEE, as well as writing the screenplays for the features I AM NUMBER FOUR and the remake of FRIGHT NIGHT. She participates in a show runners’ panel hosted by NBC’s cable division for the Television Critics Association, then takes some time for a brief private discussion.

AX: One of your shows is very meta, and the other one is very not-meta. Does one call on different things from you creatively than the other?

MARTI NOXON: Absolutely. I go into the room on UN-REAL and I would talk about, “This isn’t despicable enough” [laughs], like, we need to rethink this in terms of how juicy and dark and how much it’s commenting on the genre, and all that kind of stuff. Whereas in the GIRLFRIENDS’ room, it would be, “Is this real? How far can we push this and not push the boundaries of what’s real?” So those are two very different things. One can be a little more satirical, the other one needed to stay as grounded as possible, while still being super-entertaining.

AX: Did you seek out two different types of writers for each of those shows?

NOXON: Yeah, I would say we looked for a slightly darker, more muscular kind of writing for UN-REAL, and then for GIRLFRIENDS’, probably a really nice balance of drama and comedy, somebody who could do that without seeming cute.

AX: On GIRLFRIENDS’ GUIDE, were any of the characters written for specific actors?

NOXON: No, I wrote it on spec. I wrote it without any knowledge that it was going to get made. I just wrote it because I wanted to write it.

NOXON: To a degree. I feel like those feelings are pretty universal, and certainly people that I was talking to, other producers like [fellow GIRLFRIENDS’ exec producer] Meryl Poster, would say, “You have to write about this.” It wasn’t until I found somebody else’s story that I could tell it through that I could do it, because otherwise it was going to be too personal. So I found a little way to relate to it. But you do start writing for actors once you’re working with them.

AX: Well, for instance, you have J. August Richards, who you worked with a decade ago on ANGEL, playing Ford. His role seems to have grown since he was cast.

NOXON: Exactly. Paul [Adelstein, who plays Jake and has also written a teleplay for the series] has really emerged as such a strong part of the show, as a writer and an actor, and it changed the storyline.