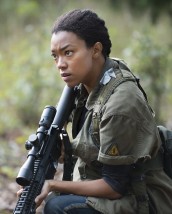 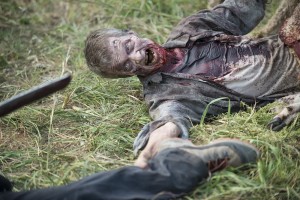 So we learned some interesting things about Rick and company when they are thrust into a pseudo-society on THE WALKING DEAD, they turn a bit creepy, apathetic and paranoid.

In “Forget,” I’ll be honest, not a heck of a lot happened in terms of advancing the storyline now that the gang is all moved into Alexandria. Instead we got treated to another episode dealing with character development, specifically how the gang is reacting to this new improved lifestyle within the walls of the town.

Here’s some of the things we learned:

“Forget” I assume refers to putting the past behind them and trying to live in the new situation that has presented itself which is obviously a million times better. As opposed to “Remember” which was the previous episode that was more about not losing that harsh part of themselves that enabled them to survive for so long.

The leader of Alexandria, Deanna (Tovah Feldshuh), is throwing a party in honor of the new members of the community much to the dismay of Rick and company because frankly they have no clue how to interact in a social environment anymore. It is interesting that the party was portrayed exactly how it was in the comics as all of the members of the crew were just uncomfortable with the party and acted in similar regard. Also, the hanging of Michonne’s katana was done in the same way as was Abraham’s happiness to find beer once again. I am enjoying these close interactions between the printed version and the TV universe and it will be interesting to see how far they take or if they’ll once again go more toward their own storytelling again.

Rick once again has an interesting conversation with Jessie (Alexandra Breckenridge) that turns into creeper status when he steals a kiss in the same house where he husband is and then the next day stares her down on the street. We got introduced to Jessie’s husband, Pete (Corey Brill), at the party and this will become an interesting plotline if they continue to follow the same path as the comics with him and Rick’s interest in Jessie.

Meanwhile, they seem to be grooming Sasha to be Andrea in the comics of Alexandria by making her the sniper in the watchtower and by having her have real problems adapting to the new way of life – seeing images of what happened before – and unable to interact with really anyone on a social basis.

We also got the formal introductions of Tobin (Jason Douglas) and Olivia (Ann Mahoney) both of who play an important role in the comics and maybe will in the TV Universe as well.

Unfortunately, that’s really it, except for some pretty great moments with Carol and her role of becoming super spy for the group and stealing guns and then brilliantly threatening a little kid with death versus unlimited cookies after he catches her with the guns.

So while this episode had to happen, it wasn’t for those wanting a lot of action and zombie gore – although some moments with Daryl tracking a lone horse in the woods provided it – but maybe next episode will be a bit more action packed given the previews