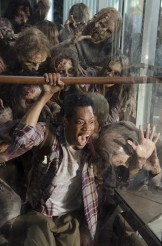 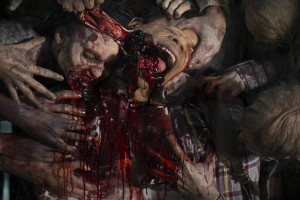 Warning: Massive spoilers ahead, read at your own risk.

This was one hell of a good hour of television.

I think much of the uber violence episodes of THE WALKING DEAD seem to really drive home the point about there is no safety in the world despite being behind tall walls and secure fences. And maybe that’s why after a handful of episodes where little to nothing happened beyond setting the stage, a ye ole face-eating, body tearing episode is just what we all needed.

Season 5 may go down as the largest body count season yet – at least of named characters that have some semblance of established development – as we said goodbye to another two people in “Spend.” As soon as we are getting introduced to some characters or getting used to seeing their face, they seem to be leaving us just as quickly. Unfortunately, that means Noah (Tyler James Williams) – the last remnant of the cringe-worthy Beth hospital episodes – took the zombie boat to dismemberment town in what has to go down as one of the worst (best?) character deaths on the show to date.

But this was the second death of the night, the first coming when clumsy Aiden (Daniel Bonjour) didn’t see an armored zombie with a grenade still strapped to his vest and shot it blowing himself and Tara (Alanna Masterson) into bad situations. Aiden got the worst getting impaled on some random equipment in the store room they visited. Obviously, it was pointed out previously that Aiden wasn’t the most careful person but this is fairly idiotic by anyone’s standard to keep shooting someone with a grenade on their person. At first, the group that went on a run to find replacement parts for their solar arrays thought he was dead but he later comes conscious and they try and fail to save him resulting in another nasty zombie chomping scene complete with intestines being eviscerated. Tara, knocked unconscious from the blast, is saved by of all people Eugene (Josh McDermitt) that finally shows some balls in the apocalypse.

No doubt, Aiden’s death will have some interesting repercussions considering he is the son of the leader, Deanna (Tovah Feldshuh) and Reg (Steve Coulter), and coincides with Father Gabriel (Seth Gilliam) revealing that Rick and crew aren’t good people but have done horrible things and will bring the devil to their paradise in Alexandria.

The gore level in “Spend” was off the charts for this episode and something I, personally, have been craving as it really helped put the horror back into this show. While the characters deaths were brutal, better than most we’ve seen so far this year, Abraham’s (Michael Cudlitz) one-man “mother dick” ass kicking was something to behold as well with gnarly head bashing gone through the roof. Stay tuned to this little subplot as it comes back to help and haunt Abraham in the future, at least if we are to believe a similar situation that came about in the comics. In fact, this was almost on par with what happened in print. I’ve been documenting how closely aligned the Alexandria plotline has been following along with the comics and this certainly adds to it including his saving of Francine (Dahlia Legault), which has future ties if it follows the comics.

Another plotline that continues to be explored in print and in the TV universe is Rick’s (Andrew Lincoln) tension with Pete (Corey Brill), the wife of Rick’s creepy affections in Jessie (Alexandra Breckenridge) and nosy son Sam (Major Dodson) who keeps bugging the crap out of Carol (Melissa McBride). When Carol discovers that Pete has been practicing batting practice with Jessie and maybe Sam, she tells Rick and that just gives him fuel to an already burning fire to do something to Pete.

The whole pace and scope of this episode was just done extremely well and maybe that’s the result of Jennifer Lynch’s direction. Of course, Lynch is the daughter of David Lynch and has established herself as an interesting director already with BOXING HELENA and has been cutting her teeth in genre by working on TEEN WOLF and WAREHOUSE 13. Hopefully this means good things are on the way in the final two episodes of the season as we end the first part of the Alexandria arc.