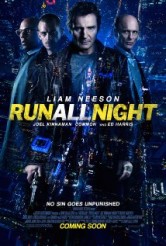 RUN ALL NIGHT is one of those movies that could be a lot better, but it could also be a lot worse. If one can accept the colossal coincidence that fuels the action, it has solid emotional underpinnings, a strong cast and a snazzy visual style courtesy of director Jaume Collet-Serra. On the flip side, writer Brad Ingelsby’s on-the-nose dialogue tends to undercut the drama.

We meet our protagonist, Jimmy Conlon (Liam Neeson), as he’s on his back in the snow, bleeding out from multiple gunshot wounds. In voiceover, Jimmy muses on his fate. We then flash back to fifteen hours earlier. Jimmy is an alcoholic (mostly) former mob hitman, kept afloat by the benevolence of erstwhile criminal kingpin-turned-legit businessman Shawn Maguire (Ed Harris). Shawn knows Jimmy is a mess, but since Shawn is a big part of why Jimmy is a mess and since the two men have been best friends since childhood and are genuinely fond of one another, they have a bond that seems unbreakable.

Shawn’s son Danny (Boyd Holbrook) has grown up to be a coke-sniffing hothead who relies on his dad for support. Jimmy’s son Michael (Joel Kinnaman) is an upstanding married father of two who wants nothing whatever to do with his father, to the point that Jimmy has never met his daughter-in-law (Genesis Rodriguez) or his granddaughters. Then, due to above-referenced coincidence, Michael’s path crosses Danny’s. In what will only be a spoiler to those who haven’t seen the trailer, Jimmy does the one thing that shatters his relationship with Shawn, setting the latter’s considerable array of killing forces against both Conlon men. However, Jimmy, to paraphrase the description of another Neeson character, someone with a skill set that makes it a bad idea to cross him.

Neeson makes us readily believe that Jimmy carries the weight of the world on his shoulders and Harris is a powerful match for him, making Shawn smart, reflective, loving and unyielding. The actors are strong enough to make it genuinely tragic when the lifelong friendship and loyalty between their characters detonates.

Kinnaman is good as well, but Michael is such an absolute sorehead that his behavior starts to rankle. We can understand that he might not be keen to have his little girls hang out with their mob enforcer grandfather, but when Jimmy saves Michael’s life over and over and over, due to an incident that is not even Jimmy’s fault, a thank you and even a measure of trust seems in order. Here the script seems to be straining for something it cannot reach, and we wind up exasperated when we should be frantically concerned.

A lot of the action sequences are very impressive, and there are some swell moments of ingenuity.  Then there’s Michael, who tends to act like a very dense horror movie heroine much of the time, and an earnestness of mood that undercuts the serious themes.

RUN ALL NIGHT is a mixed bag. It’s worth watching, but be prepared for it to trip itself up in places.