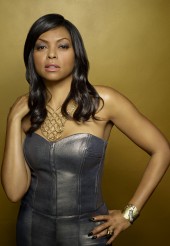 The performers talk about their on-air mother/son relationship 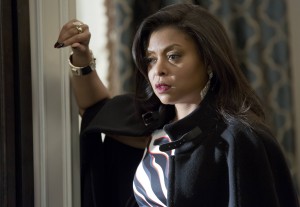 On Fox’s megahit EMPIRE, Wednesdays at 9 PM and renewed for a second season already, Taraji P. Henson plays Cookie Lyon, ex-wife of hip-hop record mogul Lucious Lyon (Terrence Howard) and mother of his three sons. Jussie Smollett plays talented and gay middle son Jamal, the only one to visit his mother in jail while Cookie did 17 years in order to protect Lucious for going down with her.

Henson, an Oscar-nominated actress who’s a veteran of many films and TV series, has been to a number of parties like the one that Fox and FX are throwing for the Television Critics Association. Smollett, however, is newer to this type of event and stops mid-sentence when he notices, “Oh, my God, that’s Billy Crystal.” Henson just laughs as Smollett says, “I’m sorry. I’ve been doing that all damn day. ‘Oh, my God, that’s J-Lo.””

AX: Do the two of you feel like Jamal is Cookie’s favorite child?

TARAJI P. HENSON: You know what? If I were a mother and I had three babies, I wouldn’t be able to choose one. I think because he is special, he’s different, and so there’s an urgency as a mother to protect him. She feels like she knows him better than she knows the other boys because she’s spent more time with him. He’s the only one that had come to visit her while she was in prison, so naturally they’re closer. But that doesn’t mean that she loves him more than she loves her other babies.

SMOLLETT: There’s also a level of Cookie that is the champion of the underdog. And because Cookie is the champion of the underdog, she feels like she has to fight for him more. Because she has to fight for him, that is their bond. He’s also come to visit her. I want to make it clear that, even with the abuse that he’s faced with his father, [Jamal] somehow is a centered, really well-adjusted person. That’s because of Cookie. Even though she was behind bars, she raised that boy behind bars. So she is his backbone, and that’s where the love comes from.

AX: She probably is not going to take a broomstick to Jamal, the way she did with youngest son Raheem.

HENSON: Jamal knows better than to call his mom a b*tch. 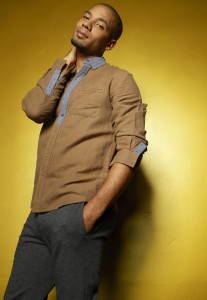 SMOLLETT: Jamal knows. You never call your mother – you never call a female a b*tch, let alone your mama! We don’t do that. That would be very bad.

AX: Bryshere Y. Gray, who plays youngest Lyon Raheem, said the two of you really had a good time working on the number you performed together in the first episode. How was that experience for you?

SMOLLETT: It was fantastic. I keep saying that that is really, truly when we became brothers. Because I had to slap him upside his head a couple times, like a big brother would [laughs]. But we bonded. We really, truly bonded recording the music the first time around for the pilot. And I feel like the bond that we share, you can tell that onscreen.

AX: You’re also a singer/songwriter in real life. In reality, is that the style of music you do and is your main instrument the keyboards?

SMOLLETT: It’s like ninety percent like that. Some of my own personal songs that I wrote and co-produced with my producer, David Ott, have made it into the show. So it’s a mixture. I’m blessed and honored, because what Lee [Daniels, who created EMPIRE with Danny Strong] has allowed me to do is have a part in bringing Jamal to life.

AX: Where do you see Jamal’s EMPIRE career going?

SMOLLETT: What you’re going to see is that Jamal is for a gay singer what Michael Jackson was for the transformation of pop music. That’s really where Jamal is kind of going – he’s going to be bigger than life.

SMOLLETT: I always say that my mom is like the perfect combination – my mom is like Cookie Lyon meets Fraulein Maria from THE SOUND OF MUSIC, Maria von Trapp. My mom never pushed us, though. It was a support thing. She was always someone that, just for fun, to entertain us, we would sing and we would dance and we would act. It was never a thing to make money. The thing is, she always gave us the option. “Whenever this is what you don’t want to do, you’re done.” I said at twelve years old, “I don’t want to do this any more right now.” My mother said, “Cool.” She threw her hands up and I never went on another audition.

AX: What would you most like people to know about EMPIRE?

SMOLLETT: That’s it’s a phenomenal show that everyone will love and everyone can identify with. Oprah Winfrey says it’s going to change the face of television.