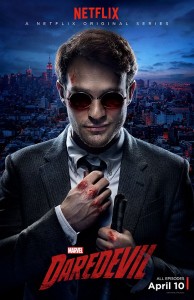 The upcoming Netflix original series, MARVEL’S DAREDEVIL has released the first full trailer for the show, debuting on April 10 on the streaming network.

The trailer shows a bit about what to expect from the series – the origin of his powers, his attempt to become a superhero because of the rise in crime in the city, his daytime lawyer job and his nemesis in Wilson Fisk aka The Kingpin played by Vincent D’Onofrio.

Starring Charlie Cox as Daredevil aka Matt Murdock, Rosario Dawson as Claire Temple, TRUE BLOOD’s Deborah Ann Woll as Karen Page and Elden Henson as Foggy Nelson, the series is a first in a number of original Marvel programming coming to Netflix followed by A.K.A. JESSICA JONES, MARVEL’S IRON FIST and MARVEL’S LUKE CAGE. This will lead to a superhero team known as THE DEFENDERS