The actress talks the final season and her character Ava Crowder 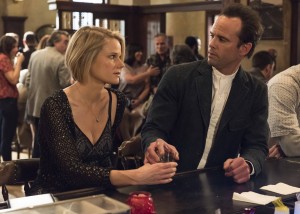 FX’s JUSTIFIED, the series developed by Graham Yost from Elmore Leonard’s novella FIRE IN THE HOLE, is in its sixth and final season Tuesdays at 10 PM. U.S. Deputy Marshal Raylan Givens (Timothy Olyphant) may or may not turn in his badge to go live with ex-wife/baby mommy Winona (Natalie Zea) and their infant daughter in Florida, but before he leaves Harlan County, Kentucky, he definitely wants to catch his one-time friend and full-time criminal Boyd Crowder (Walton Goggins).

Caught in the middle is Boyd’s fiancée Ava Crowder, played by Joelle Carter. In JUSTIFIED’s first season, Ava shot her abusive first husband, Boyd’s brother Bowman. Given Boyd’s complicated feelings about his blood relatives and his lifelong adoration of Ava, this wasn’t much of an impediment to their romance. It turns out that, now Ava has come clean to Boyd about Raylan forcing her to snitch for him, even this doesn’t ruin things. Of course, Ava is still perturbed that Boyd let Ava go to jail rather than taking the rap for her (Raylan got her sprung so she could spy on Boyd), and if Boyd ever finds out that Ava and Raylan recently had a night together, there will be hell to pay.

Carter gets on the phone to talk about wrapping up JUSTIFIED, as well other her other recent projects.

JOELLE CARTER: Yeah. No. I mean, I definitely have so many different emotions. It’s been a hard season and it’s been a wonderful season. I’ve been trying to enjoy every single minute. I am going to miss Ava and Boyd and Raylan and this wonderful world that Elmore Leonard created and then [we?] kept alive. But I do strongly believe that this should have been the last season. If we can go out on a high note, we’ll serve the show. And there’s so much to come. I’m going to embrace it and I’m going to be sad, because it is sad for me, and I hope we all make it to the end of the season [laughs].

AX: How would you describe Ava’s state of mind about now?

CARTER: [laughs] I would say frantic, disturbed, nervous. She’s in a spot. She’s trying to figure it out. I think in [the sixth-season episode “Trash and the Snake”] is the first time we see her kind of being back to what she thinks is a little bit of power or control, and in a way rekindles the relationship with Boyd, and calls Raylan out a little bit, telling him, “What’s it like to hold someone else’s fate in your hands?” And she has her moment with Katherine Hale [played by Mary Steenburgen], and they have a good day, actually. I think they actually kind of bonded with each other – they’re both strong women. And then by the end of the episode, Ava’s lost all power and faith and she wants out. It’s a beautiful episode. It’s such a big journey for a woman who’s already on a journey that you can’t imagine getting any bigger, so a lot happens.

AX: How have you enjoyed working with Mary Steenburgen?

CARTER: It’s amazing. She’s a lovely, lovely person in real life and she should be playing more evil, dramatic, heavy characters, because she’s really pulling off a great, magnetic character on the show, but a more sophisticated, worldly one.

AX: Does Ava have any actual affection left for Boyd? I mean, do we know? Does she know?

CARTER: Yes, of course. I always find it funny that people think that [Ava and Boyd] just fall out of love. I feel like she’s still in love with him, and the idea that he could potentially pull off something that would help them escape this situation that they’re in. I think she wants it to happen. But she also is made up of the same material that Boyd is made up of – she has trouble trusting, she has trouble being in a love relationship. She’s an outsider, he’s an outsider, Raylan’s an outsider. They don’t really have friends; they have their own moral code. So even surviving is hard for them – it’s hard for them to just live. And I think with all that being said, she still finds a place inside to love this man. I don’t know that’s enough.

AX: You’re about at the end of filming, so you know how it ends?

CARTER: Yes, I do. I have an idea of how it ends. It’s still being rewritten and adjusted here and there, but I have the special thirteenth episode that we all had to sign confidentiality agreements about, but I do have a very clear idea. They’re still fine-tuning it, but the actual scripts are now written, so we all have an idea.

AX: I guess you can’t even say if you’re happy with how Ava’s story concludes within the show?

AX: Okay, then, what do you think you’re going to miss most about JUSTIFIED?

CARTER: I think I’m going to miss Ava most. I’m going to miss this wonderful woman who has survived such a violent world and sometimes is cold, but there’s a softness to her, even though she’s had such hard and rough years. It’s wonderful. I’ve learned so much from her. I’ve learned from her that you can walk through life and you can get hit hard and you can let it take you down or you can get back up and keep walking with some grace. To the umpteenth degree, in her world [laughs]. So I’ve learned a lot about longevity and hope.

AX: Does having worked in JUSTIFIED for so long put anything in your own life into perspective, like, “Okay, at least I’m not stuck between spying on my fiancé and …”?

AX: Is there anything you won’t miss? Are there mosquitoes on set at dusk, or something like that?

CARTER: I would say maybe the drive, but I’ve enjoyed the drive. It helps me meditate and get a little peace and quiet that I don’t get maybe at home or the rest of the day or whatever. I’m so lucky that we shoot here at home in California. What will I not miss? I don’t know. I’m going to miss it all.

AX: It seems like last year was a very busy year for you, because you produced a short film and you were in three feature films, plus an episode of CONSTANTINE. Are you looking to produce features – was producing your short film BUDDY a prelude to producing features, or did you just think that that was a fun project, and you wanted to help bring it to life?

CARTER: Yeah. BUDDY was a project I wanted to do because I had shot another feature [LOST ANGELES] with Walker Gibbin and it was an original creation and I love to support art and I wanted to support him. I’m always looking for something. Down the road, I’m sure I will [produce features]. It takes a lot of time.

AX: It looks like the three features you did were in different genres. THE WEEK sounds like a rom-com, JESSABELLE was horror and THE LIVING was a drama. Do you have any preference for any of them?

CARTER: I loved doing THE WEEK. Talk about supporting an art – these guys were so much fun, and Rick Gomez, who’s on the show with us, he invited me up and I got to work with him and Jon Gunn and John Mann. I told them, “I’m your girl, so if you ever want to do something else, let me know.” And they’re so good. It was fun to do that, especially coming off of JUSTIFIED. THE LIVING was a beautiful script. So I love mixing it up. If I can keep doing all of it, that would be great. You come out of one thing desiring another.

AX: Do you know what you’re doing when JUSTIFIED wraps?

CARTER: I don’t. I’m being very selective and just waiting for the right thing. I want to really be in love with it. I think I want a project with a big vision and definitely character-driven.

AX: Would you want to dive into another series, or do you think you’d like to do a couple of shorter-commitment projects? Or does it depend on the role?

CARTER: I’d really like to do a miniseries. They have had some great successes with their short-term time – they’ve told some great stories. I love them. I love being able to even as a viewer tune into something that I’m actually going to be able to handle. I think they’re going to be very successful. I think TV’s where it’s at. It’s hard to get into films, and a lot of them can only take risks on little things, so I like where I’m at. It has the content, and the quality of content, that I’m looking for. So it is where it is [laughs]. Of course, I’d love to do a film – don’t discount that. But I’m definitely game for another series.

AX: Not asking for spoilers for what we haven’t seen yet, but do you have a favorite scene or episode for Ava that we’ve seen?

CARTER: There are some amazing scenes coming up. The scene that just aired I love. I loved getting drunk with Walton and then having to deal with Raylan. For an actress, it was wonderful. It was actually two scenes that allowed for great humor and also having gravity. So that was one of the ones so far.

AX: When you were playing the drunk and going to bed scene between Ava and Boyd, were you sort of relaxing into your history with each other? Not actually drinking alcohol or having the same sort of history as your characters, of course, but as far as you’re laughing and relaxing on camera with somebody you’ve been working with for six years, does that background of having worked together with the other performer help in that scene, as opposed to playing that scene with an actor you’d only just met?

CARTER: Yes, definitely. I would think the whole secret of playing drunk is relaxing [laughs]. Because we do when we’re intoxicated or under the influence of a substance. You’re much more relaxed than you are in your normal, everyday life. So yes, the history of us playing these two characters and knowing these characters and knowing each other plays into it for sure.

AX: And what would you most like people to know about JUSTIFIED as a whole?

CARTER: Oh, it’s just wonderful entertainment. If you haven’t seen it, you start from the beginning and catch up fast, because this season’s not going to disappoint.