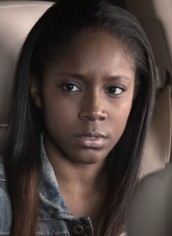 The actress talks her TV One telefilm thriller

In TV One’s new telefilm HEAR NO EVIL, set and shot in Atlanta, Georgia, Jahnee Wallace stars as Shelby, a deaf teenager who suddenly can hear. Not only that, but she’s sure she’s hearing God. While Shelby’s parents (played by Jill Marie Jones and Richard T. Jones) and uncle (Jackie Long) have differing reactions to this development, there’s also the possibility that she may have heard something that endangers her.

Wallace has played the adolescent selves of Wendy Raquel Robinson’s Tasha on THE GAME and Nicole Beharie’s Abbie on SLEEPY HOLLOW. She also costarred in the telefilm A CHRISTMAS BLESSING, directed by HEAR NO EVIL helmer Russ Parr.

Sitting in the grand ballroom foyer at Pasadena’s Langham-Huntington Hotel, Wallace discusses her complicated character in HEAR NO EVIL.

AX: Your character Shelby starts out as deaf. Did you know either Signed Exact English or American Sign Language before you started this?

JAHNEE WALLACE: No, I had to completely learn and study it. I went to an instructor at university and she helped me out.

AX: Did you have to train yourself when you were playing Shelby not to automatically look up when somebody’s talking?

WALLACE: Yes. It was a lot of practicing and studying that went into it. I actually prepared for the role for a few months before I even auditioned, so I was pretty good. When I got on set, I had it down pat. I practiced with family, walked throughout the house using American Sign Language.

AX: Did your manager bring the script to you months ahead of casting, or how did you find out the project existed?

WALLACE: I had worked with the director before and he brought it to me. He said, “I really think that you could pull this off, I would really like to bring you to audition” a few months before casting, so that’s why I had a lot of time to prepare before I auditioned.

AX: Did you have to prepare for any other things? Is this a very action-oriented piece where you do a lot of running and fighting back?

WALLACE: Yes, it was. I did have to do some stunts throughout the movie. I didn’t really have to prepare too much for that – I’m pretty athletic, so that was all right [laughs].

AX: What else should we know about Shelby as a character?

WALLACE: Well, she believes in God, and she has a lot of faith and good integrity, my character. She’s a really good person. She’s kind-hearted and she’s pure.

AX: Does she know that she’s been in the presence of a crime?

WALLACE: She doesn’t know that until toward the end of the movie. She starts receiving a more clear picture of the information that’s been given to her.

AX: Have you played a devoutly religious person before?

WALLACE: No, ma’am, I haven’t. This is the first time.

AX: Are there things in the role that you can relate to previous roles?

WALLACE: Not really. This was pretty new for me, this type of role, but the fact that she was a Christian and it was faith-based I related to, because personally, in my life, I’m Christian, so on that part, I related to the character.

AX: Shelby is fifteen. Did you have any feeling of, “I’m playing somebody who’s a little more naïve and younger than myself?”

WALLACE: I’m seventeen. I did film it when I was sixteen. It was only a year [age difference]. You don’t grow up too much between fifteen and sixteen [laughs].

AX: Your earlier telefilm with director Russ Parr was A CHRISTMAS BLESSING. The title sounds as though that would be a religious story. Or was your character in that not as religious as the story around her?

AX: Besides faith-based, how would you describe HEAR NO EVIL?

WALLACE: I would say it’s on the thriller/drama side.

AX: Is there any comedy mixed with the drama?

WALLACE: I would say Jackie Long’s character brings the light to it. He’s the comedian throughout the movie, but it’s not like he’s trying to be funny, it’s just like one of those people that are just funny. So he brings a little bit of laughter throughout it.

AX: Is there anything or anyone you study on set to see, maybe do a little more of this? What do you study so that you can perform better?

WALLACE: Well, every time I work with actors and actresses that are more seasoned than me, I’ll always take a little bit of something like how they prepare and ask them what they do to prepare, so I take a little bit of what works for me from each person I work with, because most of the time, they have been doing it longer than I have, so that helps.

AX: What’s the most valuable thing you’ve learned so far?

WALLACE: I’ve learned to trust myself when working, not to second-guess as much, because sometimes, if I don’t get affirmation from the director, I’ll be wondering, “Oh, did I do that right?” But just to tell the truth is the art of it.

WALLACE: Yes. I just worked on SONS 2 THE GRAVE.

AX: Can you talks about your overall career aspirations?

WALLACE: I really think, seeing as I’m a Christian, I really just want to let people know that through God you can do anything you put your mind to. So I want to inspire people, and other young adults, young females, I want to let them know to follow their dreams and their hearts, no matter what. Because anything you put your mind to, as long as God’s involved, you can do it. I would say more acting, but anything I do, I give glory back to my Lord.

AX: There are some people who are actors and also preachers …

WALLACE: I don’t want to preach. I do ministry when I am home – I dance as well and sing. I minister that way – I do the choreography for the youth at my church, so I give back in different aspects through the performing arts, because that’s what I do.

AX: Is there anything else you’d like to say about HEAR NO EVIL?

WALLACE: Just be prepared to be on the edge of your seat.

This interview was conducted during TV One’s portion of the Television Critics Association press tour.