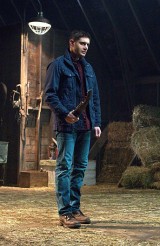 The emo makes more sense than usual in this one 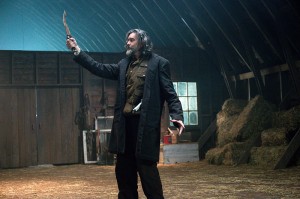 By SUPERNATURAL’s tenth season, someone could seriously damage a liver with a drinking game involving instances where Dean (Jensen Ackles) and/or Sam (Jared Padalecki) worry about the harm they cause. Even so, the episode “The Executioner’s Song” earns its emotions fairly, with Dean rightfully terrified of what could happen if he gets his hands on the First Blade again.

However, since Crowley (Mark A. Sheppard) has the mystical weapon hidden away, what’s the problem? Well, it seems the Blade’s original owner, Cain (Timothy Omundson), has had his own attack of the guilts and is wiping out all of his bloodline – about one-tenth of humanity. Castiel (Misha Collins) tracks Cain to a field where Cain is burying all his kills. Castiel learns from Cain that there really is no way for Dean to get rid of the Mark of Cain. Furthermore, Castiel can’t talk Cain into trying to regain his self-control.

This means it’s a job for the Winchesters, or, more specifically Dean, who as the bearer of the Mark is the only one who can wield the First Blade to kill its original owner. Crowley agrees to lend the blade to Dean. This causes Crowley’s mother Rowena (Ruth Connell) to leave Hell in a huff, declaring she’s very disappointed in her boy. Since Rowena keeps trying to manipulate Crowley in ways that are not only open but borderline camp, it’s impossible to tell if this disappointment has anything to do with Crowley’s continued susceptibility to the Winchesters, or just to do with Crowley’s failure to do what Rowena wants.

With Cain set to kill a twelve-year-old descendant, there’s no time to lose. Dean is afraid, with some justification, that using the Blade will turn him into a rampaging maniac. He begs Sam and Castiel to kill him should he win the fight with Cain but lose himself. They promise. Cain warns Dean that Dean will wind up just like Cain, including the part where Dean will eventually kill his brother. Dean succeeds in killing Cain, doesn’t wind up losing his mind and gives the Blade to Castiel for safekeeping.

Given Castiel’s record of questionable judgment, there’s an argument to be made that perhaps everybody was safer with the blade in Crowley’s care. Since Dean is far too distraught about his own potential for mayhem, it’s an understandable choice. It’s impressive how both Ackles and the show can still make Dean’s angst seem fresh and warranted. Padalecki and Collins do a good job with their characters’ literal/figurative fraternal support and anxiety. Sheppard is staunch as always, but here’s hoping the upcoming scripts don’t make Crowley overly wistful and/or credulous.

“The Executioner’s Song” is one of those episodes that looks as though it’s going to move the plot forward more than it actually does. This said, it has momentum and impact. This is an instance where the journey matters more than the destination.