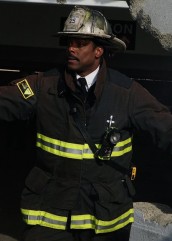 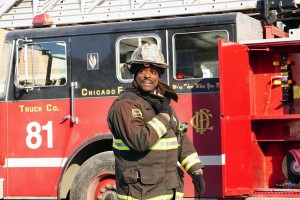 In NBC’s CHICAGO FIRE, now in its third season Tuesdays at 10 PM, there are few dull moments at the home base for Engine 51, Truck 81, Squad 3, Ambulance 61 and Battalion 25. Chief Wallace Boden, played by Eamonn Walker, not only has to try to keep all his people safe while they protect the city, but he’s now also managing a new wife and baby.

Despite the all-American accent, actor Walker (whose first name is pronounced AY-mon) is actually from London, England. He previously played Kareem Said as a series regular on HBO’s OZ. Other credits include the U.K. series IN SICKNESS AND IN HEALTH and THE BILL, the U.S. shows JUSTICE, KINGS and THE WHOLE TRUTH, and the features UNBREAKABLE, TEARS OF THE SUN, CADILLAC RECORDS, THE MESSENGER and COMPANY MEN.

Walker also plays two roles in the full-cast audio book recording of Max Brooks’ WORLD WAR Z, released in an abridged edition in 2006 and reissued in a longer “complete” edition in 2013. Walker’s characters are a South African logistician and a British aristocrat who is also an artist.

AX: Did you originally sign on to do two roles on the WORLD WAR Z audio book, or did they have you and ask you to do another character?

EAMONN WALKER: They had me, and then they said, “Would you read another?” [laughs]

AX: Which one did you have first?

WALKER: I can’t remember. I think I was the South African guy and that was going so well that they added the other one. But it’s so long ago now. Somebody actually gave me the CDs the other day. I didn’t have a copy of it. I mean, I was just really, really pleased that it’s out there and that people like it.

AX: Have you always had this facility with accents? Because you do two very different accents in that, and then you’re doing American in CHICAGO FIRE.

WALKER: I have an ear, I guess, for the musicality of the voice. I also know and come from a philosophy of acting that your whole body is a tool box. So my voice, the way I walk, the way I move, all of that is part of the tool box. So if I can formulate a character based on what’s coming off the page, also from what the writer is trying to say, then I’ll use whatever. Sometimes an accent is easy and sometimes one isn’t. So it’s much more about building the character, which comes from the piece, rather than doing an accent.

AX: Is Chief Boden from Chicago?

WALKER: Yeah, the Chief is from Chicago and he is a man who has pulled himself up by his bootstraps. So he’s from the projects, he’s from the streets. But his influence comes from a person who stood up for him really early on when he was a firefighter. So all those different influences are in that man. So he’s definitely from Chicago.

WALKER: I had no idea what a deputy battalion chief was. I turned up with the rest of us actors. We sat in the Chicago Academy for Firefighters to learn. And if it wasn’t for Steve Chikerotis, who took us through what he knew and imbued us with a love and excitement that he had for the Chicago Fire Department – he pulled that into us. He literally turned around and said, “This is what we do and this is why we do it. It’s because we care about the people. We’ve got other stuff going on – we have drinking issues, we’re adrenaline junkies, we’re all of that – but the truth of the matter is, is every single one of these first responders is willing to give their life for their fellow man.” And you don’t see that, you don’t hear about that. And so it was when he started talking in the classroom, I was like, “I still don’t know what it is, but anyone who can make that kind of commitment to someone they don’t know, I want to portray.” And Steve Chikerotis was the finest fireman – he still is, but he’s just retired, actually – when you see him walk through a room full of firefighters, they all respect him in the same way, because they know that he would lay down his life for them and other people. So I knew that when I saw that, that’s what I was going to try to play.

AX: He’s one of your advisors on CHICAGO FIRE?

WALKER: He’s now the consultant. Half the stories that you get come out of his mind or his thirty-five year career as a firefighter from Chicago. And I wanted to emulate that in some shape or form.

AX: Does that willingness to die for someone else inform Boden’s self-worth? I mean, a lot of us ask ourselves, “What are we really doing in the world?” And he knows.

WALKER: He knows, yeah. I mean, he’s selfless. People talk about a hero – [Chikerotis is] not a hero. He is a selfless man. What is it they say? In this world, there are two types of people – there are givers and there are takers. This man is a giver. He would give you, if he saw you in need, and I’ve seen him do it, when I pulled up and there’s a guy on the corner and he’s asking for money, if he’s got it extra, he will give it to you. That’s the type of man he is. And so when you’re around someone like that, that stuff starts to rub off. And so yeah, he’s given us all a vocation. The excitement and the family feel and all the rest of it you get watching the show comes initially from him.

WALKER: Yes, I’ve walked into fire departments in Trinidad and Tobago, London, and they all watch the show and they love it, because it’s the same thing. When you put your life on the line, when you walk into a burning building knowing that you may not walk out, one thing that’s the same, no matter what country you’re from, is that you may not walk out of that building. So you have to know why you’re walking in, regardless of the amount of fear that you’re feeling. So there’s a great deal of fear, but the thing of knowing who you are and why you are is what pushes you through, because there might be a child, or might be an old woman, there might be someone who can’t, and you can.

AX: Richard Roundtree guest-starred as Boden’s father. He of course played the title role in the Seventies  SHAFT films. Were you a SHAFT fan before this?

WALKER: I was. It was a complete honor to work with that man. I’ve worked with a great many people, but I’m going to remember working with that man for the rest of my days.

WALKER: This takes up all my time [laughs].

AX: What would you most like us to know about CHICAGO FIRE right now?

This interview was conducted during NBC’s day of presentations for the Television Critics Association press tour at the Pasadena Langham-Huntington Hotel.